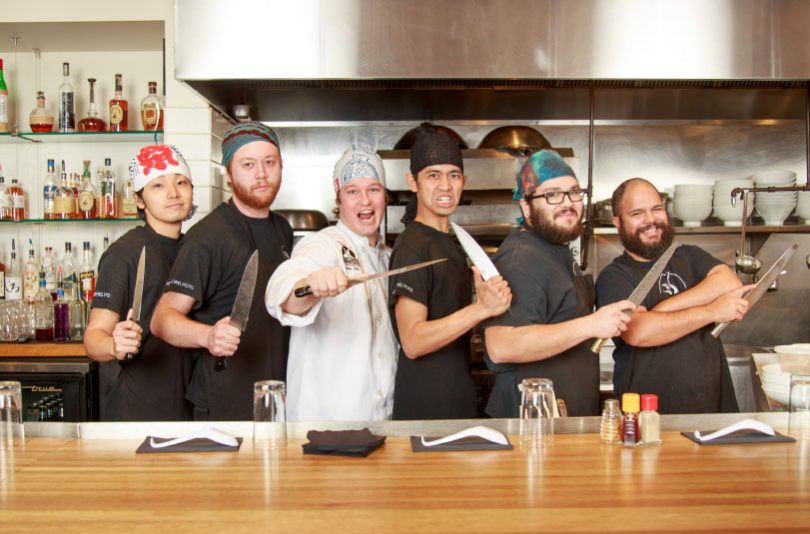 The 2016 Iron Chef Gainesville Champion, Steve Grimes, is ready to defend his title and explore new ventures in 2017.

When Chef Steve Grimes won the 2016 Iron Chef Gainesville competition, his wife threw his daughter into his arms and his whole team surrounded the excited new titleholder. Though it was his first-ever cooking competition, Grimes’ talent, experience and hours of practice led him to beat out the sitting winner and become Gainesville’s 2016 Iron Chef. Almost a year later, Grimes is taking on new projects in the restaurant business while getting ready to welcome a second daughter into his family.

While Grimes may have been a first-timer at the Taste of Greater Gainesville 2016, he is a veteran of the Gainesville restaurant community and executive chef of Crane Ramen.

During his travels through Asia, Grimes became acquainted with Japanese staples like sushi, but his day-to-day food was ramen. After touring and tasting all of the ramen that New York had to offer, Grimes felt confident that the menu he designed for Crane Ramen would be on par with the best. His childhood love for hibachi, a Japanese cuisine that uses an iron grill to cook food, combined with his creativity and fusion of Asian flavors has made Grimes’ Crane Ramen menu a favorite among Gainesville residents. To Grimes, it’s these Crane Ramen regulars who make all the work worth it.

“Any time I do a special, it doesn’t even have to be described,” Grimes said. “They just say, ‘That’s what I want!’”

With the growing success of his dishes and the trust his patrons have in his flavors, Grimes is pushing for part ownership at Crane Ramen and getting excited to help out with the opening of a second Crane Ramen in Jacksonville.

With a mastery of Asian cuisine under his belt, Grimes felt that 2016 was the perfect time to set a new goal: baking.

“Pastry has been my crux since the beginning,” he said, explaining that it’s the reason Crane Ramen’s only dessert is homemade ice cream.

To overcome his pastry problem, Grimes has been interning during his limited free time at BakerBaker, a local Gainesville bakery, to learn traditional techniques and the science behind baking.

“To have [Amanda, the owner of BakerBaker] explain stuff is really fun…it all makes complete sense!” Grimes said. He hopes that the experience will help him master baking and help him develop more dessert recipes.

Grimes also has some advice of his own for those aspiring to become chefs one day. While there’s no doubt that technical abilities and an understanding of flavors are essential to a successful career as a chef, surprisingly enough, Grimes explained that math is actually the most important factor. “Algebra is definitely the most important thing that any chef should know,” he said.

“To understand that A+B=C is to understand how ingredients go together and play off of each other.”

When asked what the secret to a great bowl of ramen is, Chef Grimes responded simply, “Heart.”