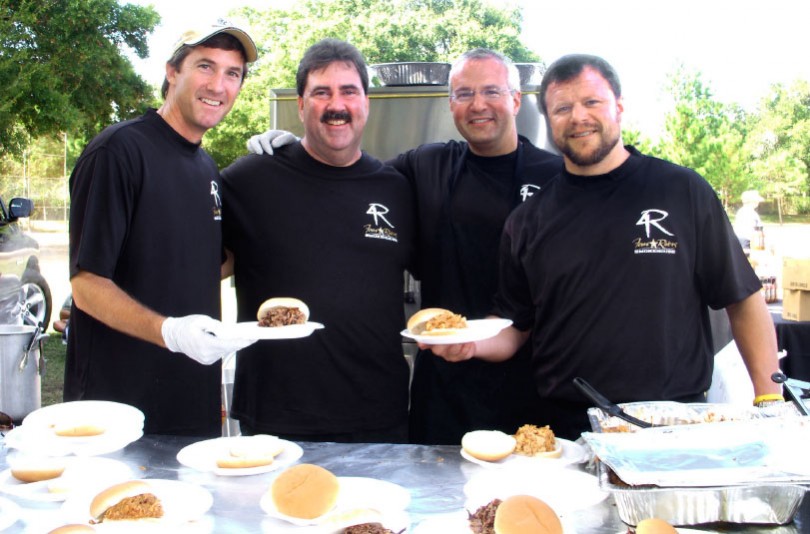 To help raise money for the girl’s treatment, Rivers hosted a “barbeque ministry” where he cooked and sold his famous brisket at his church in Winter Park, Florida. Four hundred and fifty people attended the event.

He continued to do this on the weekends for the next four years. Setting up shop in his garage, Rivers would come home from work on Fridays, put on his apron and start cooking for that weekend. Word spread, and more people started contacting him. Every weekend he would barbeque for a different cause.

“I did it for whoever would come asking for help,” remembered Rivers. “One weekend, it would be for an organization helping the homeless, and the next one would be for a single person suffering from a disease.”

At the time, Rivers was working for a large healthcare company, but looked forward to every weekend when he could cook.

“I felt like a completely different person,” he said. “It’s a blessing that you can do what you are passionate about and help someone at the same time.”

So in 2009, Rivers left his job and opened the first 4Rivers Smokehouse restaurant in Winter Park, Florida. Currently, there are twelve locations all across the state of Florida, from Tallahassee to Coral Springs. This year, 4Rivers will expand beyond the Sunshine State, with plans to open a shop in Atlanta, Georgia.

Staying true to his origins, Rivers is still dedicated to helping the community around him through his restaurant.

“The ministry is our core focus,” he said.

Two Sundays a year, the 4Rivers team at every location participate in Serve Days, where they’re given the opportunity to volunteer at a local organization. The organizations’ missions range from increasing education to helping the homeless and fighting human trafficking. The tasks vary each time; they could be cleaning, cooking, and arranging kitchen supplies, or they could be talking to people in need of support. Sometimes, members of the team bring family members and friends to Serve Days. For some of the volunteers, it’s the main time they have to be involved in their communities.

“You definitely have the core team that always goes, but it’s always refreshing to see new faces show up,” said Rivers.

John recalled a time when he and a volunteer group were at a homeless shelter where about 20 percent of the people were women with children. One young 4Rivers employee was very quiet, and when Rivers asked her what had happened, she said that she was shocked to see how many children were there.

On a personal level, Rivers has helped around 900 organizations through donating, volunteering and fundraising. Right now, he is involved with an organization called Elevate Orlando, which teaches public school students about ethics, leadership and camaraderie to help them become better people. The organization has in-school and after-school programs that serve 1,250 students weekly. The students involved have a 97 percent graduation rate and a 95 percent college entry rate.

4Rivers Smokehouse will also be participating in the seventh annual Taste of Gainesville on June 6, 2016 to benefit local children in need.