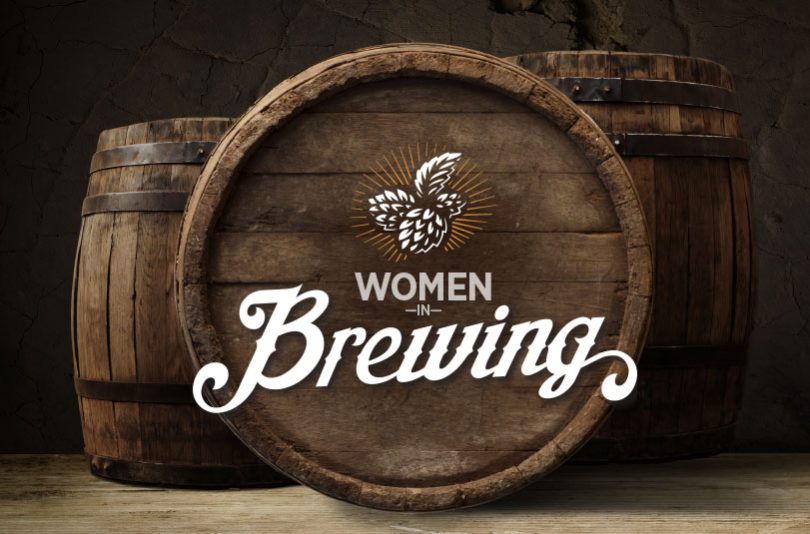 One of Greater Gainesville’s most popular attractions is our wide range of breweries and distilleries. The brewing industry is typically considered male-dominated, so HOME profiled five local women who work in various aspects of the industry to talk about their experiences, passions and advice for women looking to get into brewing. 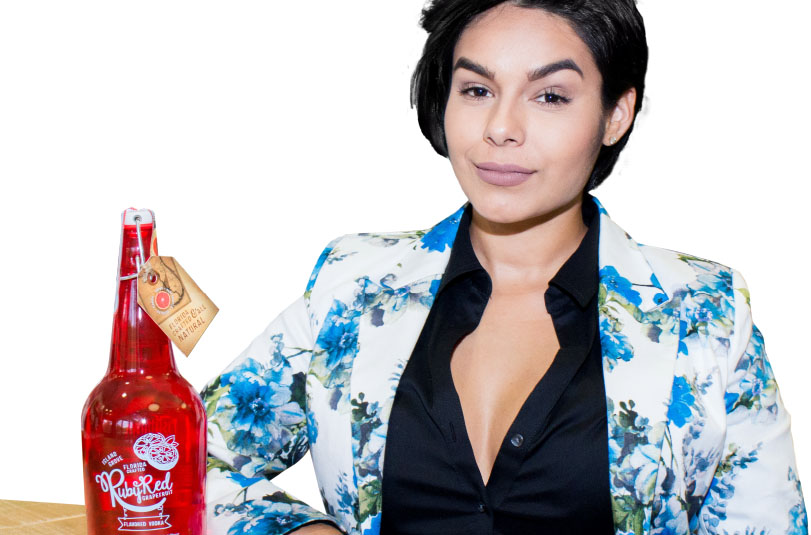 Lena Torres got her start in the industry as a mixologist. As a close friend of FishHawk Spirits CEO David Molyneaux, Torres experimented with making new drinks for the Ocala company’s distilleries. Now, Torres has been with FishHawk for two years and is currently the manager of the distillery’s new branch in Tampa. Torres was the driving force in setting up the new location, which opened in October 2016, and helped create everything in the store – from the tasting room to the decor.

She is at the distillery every day talking about the products and educating customers about spirits and the difference between mass-produced spirits and FishHawk’s “farm to bottle” products. At FishHawk, they focus on what goes into the product and how it affects the taste and the consumer. Using her mixologist background, Torres brainstorms drinks that showcase the products and taste the best for customers, especially women.

“I don’t like it when people tell me that women shouldn’t drink whiskey,” Torres said. “When I was a mixologist, I tried to make drinks more palatable for women, and at FishHawk, we have some of those blends.”

Her words of wisdom for any woman looking to break into the industry, or those who are already in it, are simple.

“Women can do it better,” Torres said. “We add a feminine and different aspect to the industry. Anything we set our minds to we can do, so take the world by storm and get in it.” 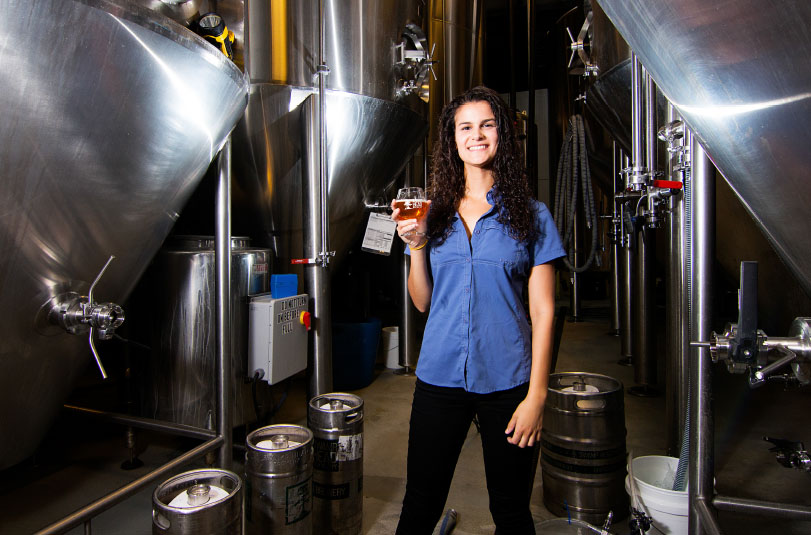 Molly Eveleth’s love for brewing started at a young age while watching her father homebrew. After a less-than-idyllic experience working in a bakery plant, Eveleth turned back to her first love and got an internship at Swamp Head Brewery during her senior year at the University of Florida. The internship turned into a full-time job after her graduation. Nearly two years later, Eveleth thinks she’s found where she’s meant to be.

“It’s a lot more relaxed than other industries, which is part of the reason I like it,” Eveleth said. “I love the small-company feel of a brewery and knowing everyone. Also, what could be better than getting off work and having a beer?”

Eveleth is a quality assurance technician at Swamp Head, which means she works in the lab monitoring the yeast to ensure that the brews have the excellent taste customers have come to expect from Swamp Head. Eveleth was the first woman to work strictly in production at Swamp Head and loves seeing more and more women getting involved in various aspects at the company. Her advice for women looking to get into brewing is to treat it like anything else in life.

Eveleth explained, “If you go in confident, excited and ready to learn, you will be just as respected as anyone else.” Eveleth thinks she’s found her long-term home in the brewing industry and can’t see herself doing anything else. 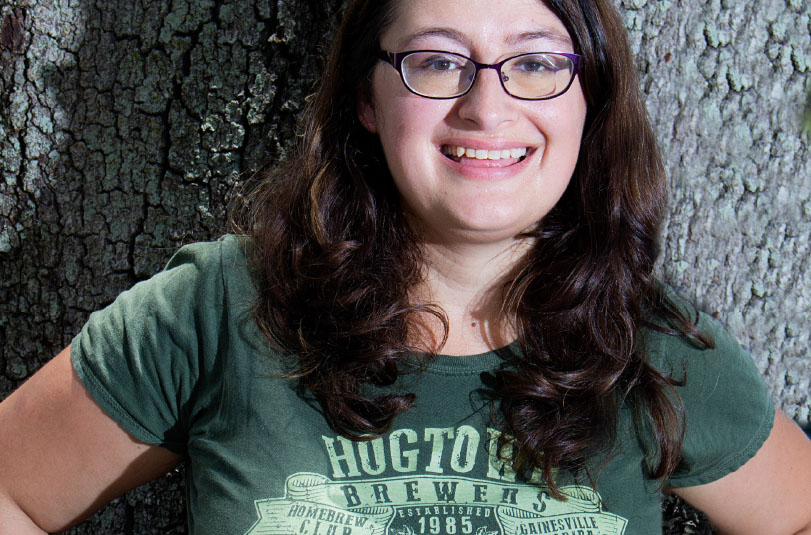 Terrie Vasilopoulos got into brewing almost a decade ago, and her love for craft beer and homebrewing has only grown. Homebrews are typically made in smaller batches than commercial brews and allow for more creativity and experimentation, which is part of the reason Vasilopoulos loves it so much. She is an assistant professor in anesthesiology and orthopedics at UF and considers herself a scientist at heart.

“As a scientist you learn to have a really critical eye of how changing one thing could change your whole outcome,” Vasilopoulos said. “You’re always interested in exploring and discovering new things, and I think that spirit carries over to homebrewing. Homebrewing is a nice fusion of art and science.”

When Vasilopoulos moved to Gainesville in 2014, she started looking for the local homebrew club. She joined Hogtown Brewers three years ago and has been an involved member ever since. She served as the club’s secretary last year and was recently elected to the vice president position. She will also serve as the chair of the 2018 Hogtown Beer Fest, one of their biggest events of the year. Vasilopoulos feels at home at Hogtown and thinks she’s found a place where she is comfortable.

“It’s important to find your community — people you can brew with and bounce ideas off of,” Vasilopoulos advised. “You don’t have to put up with people who don’t support you or who aren’t taking you seriously.”

Vasilopoulos has no plans to open her own commercial brewery anytime soon and says she will to stick to homebrewing; she loves her day job too much. Her advice to women interested in brewing is to keep pushing. “Consume all of the information online and in books that you can, but just start,” Vasilopoulos said. “Homebrewing is a lot of trial and error; your first batch will probably be awful but just keep going. If you want to brew, just brew.”

Meg The Losen
President and Co-founder of First Magnitude 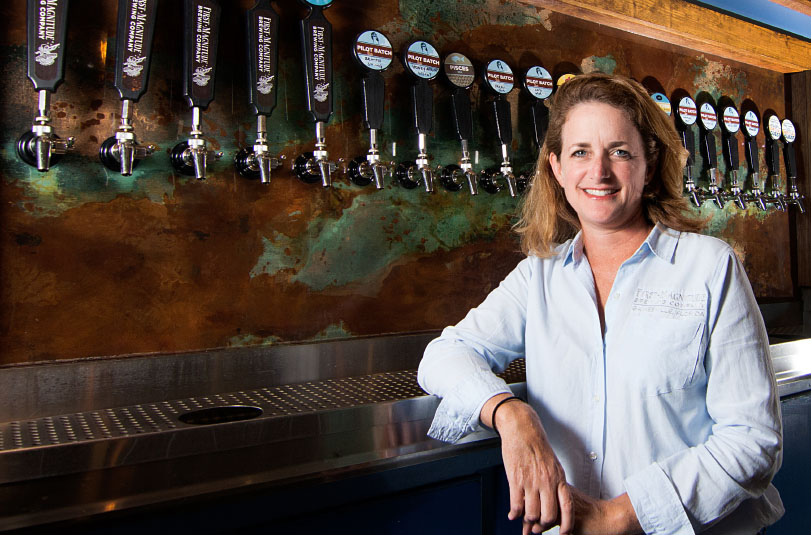 Meg The Losen has been the business brain behind First Magnitude from the brewery’s start. The Losen was one of the first co-founders to leave her job in 2013 and devote her full attention to developing First Magnitude. The brewery officially opened in August 2014, and The Losen has served as the president ever since. The Losen credits good timing for her career change; she developed an increasing appreciation for craft beer as a consumer, and the Gainesville community presented a large market for brewing. She was completely new to the brewing industry when she joined First Magnitude.

“The brewing and production side of the industry is where you see the least amount of women, but it’s changing at an increasing rate, which is really exciting,” The Losen said. “The business side, which is what I’ve been most involved with, is still pretty male-dominated, as well. There have been times when I’ve walked into a business meeting and gotten a ‘Wait, you’re the owner?’ reaction from people.”

The Losen does a little bit of everything at First Magnitude, except actually brewing beer. She wrote the company’s business plan, raised the capital to start the business and now monitors licensing, coordinates with attorneys, attends to financial planning, staffs the team and heads bookkeeping, just to name a few. On top of her numerous daily duties at the brewery, The Losen is doing work on the consumer side to figure out how to introduce craft beer to women.

“One of the most exciting things about the brewing industry is that you are now seeing women playing a larger part in a variety of roles, everything from brewing to quality assurance,” The Losen explained. “I would love to see more women in leadership roles, and I think it is going to be fun to watch as more and more women get into it.” 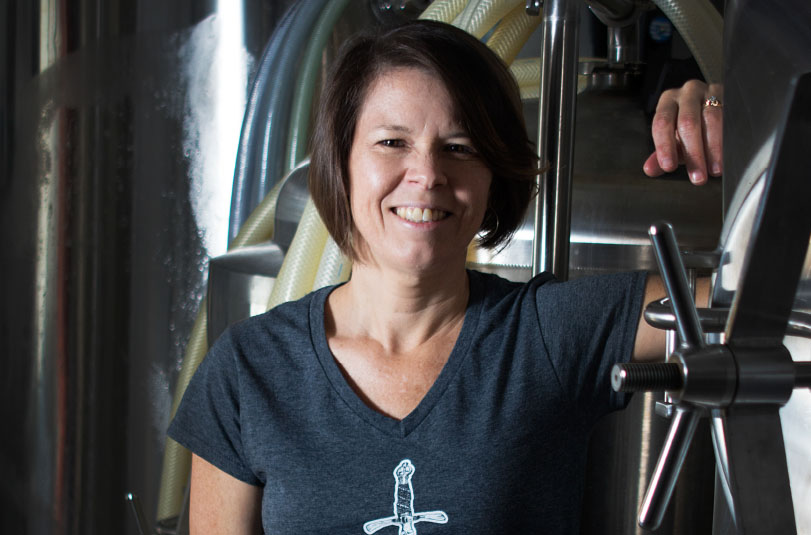 Sissy Hart is half of the husband and wife duo running one of Gainesville’s newest breweries, Blackadder Brewing Company. Chris and Sissy Hart started as homebrewers.

Sissy has a couple key recipes that she particularly loves to brew, including her award-winning Christmas beer, Emmanuel. Sissy currently works at a local food manufacturer, but she hopes to make the transition to working full-time at the brewery sooner rather than later.

When Blackadder opened in December 2016, the Harts wanted it to be a comfortable place like the pubs they visited in Europe, where people could come together and enjoy each other’s company and a brew. “I love standing behind the bar, looking at people socialize and playing games with each other,” Hart said. “It’s a very warm feeling in a very warm environment.”

Hart plans to stay in brewing long-term and will focus on building up Blackadder. She said her ultimate dream is to open up a beer, bed and breakfast someday. Hart’s advice for women looking to get into brewing? “Don’t be intimidated by it; find yourself a good instructor and a good place to start. Women have been brewing for many, many years, so just go for it.”