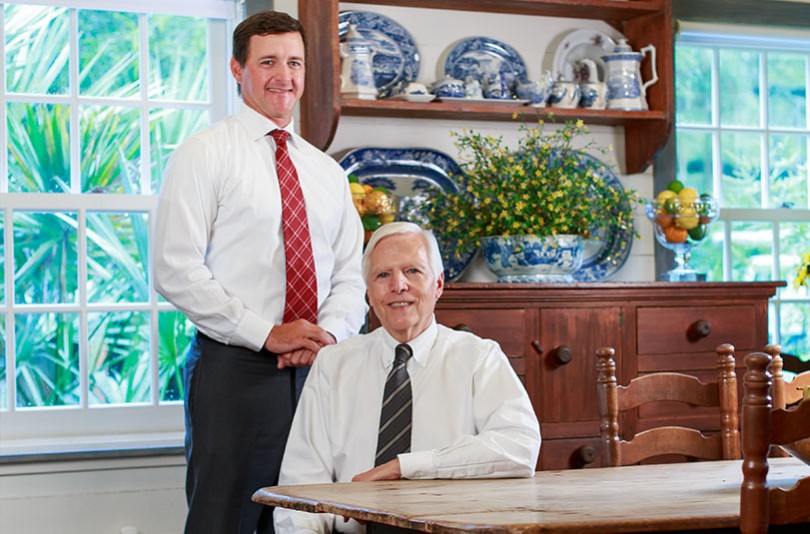 In 1998, an elderly Samuel Boone Wilson came into the Drummond Community Bank in Chiefland with a special quilt and asked to speak with Luther Drummond, the bank’s chairman. Wilson told a fascinating story of his family legacy which reached all the way back to Daniel Boone, including the details about the quilt which was made by Mary Boone with the help of Cherokee Indians who showed Mary how to prepare the vegetable dye used to color the fabric.

A dowry for a Boone family marriage, the quilt came with specific instructions to only be used for display each year between Thanksgiving and Christmas, so as not to fade the dye. The quilt was inherited by surviving sons through the generations, with the condition that they would carry on the Boone tradition of displaying the quilt during the holidays.

With his only son serving a life sentence in a California prison, Wilson, who was terminally ill, needed someone to continue the tradition. Wilson asked Drummond if he would be that person. Wilson provided Drummond with proof of authenticity which described the quilt as vegetable-dyed, hand-sewn and hand-appliqued — the charcoal outlines are still visible in several places. In addition, Wilson gave Drummond a pistol, numerous photographs and other Boone family memorabilia, most of which Drummond displays in the bank’s glass cases.

Providing a personal, small-town experience for those who entrust their wealth with him, Drummond also preserves these historical treasures and stories. Serving Archer, Bronson, Chiefland, Cross City, Cedar Key, Gainesville, Inglis, Mayo, Trenton, Ocala, Old Town, Williston and the surrounding areas since 1990, each Drummond Community Bank location is decorated with a nod to local history, including the building’s finishes, architecture and displays of local historical artifacts and antiques. “We have people bringing visitors from out of town to see the historical items we have in the lobby,” said Drummond.

The lobby in the main location in Chiefland houses a number of historical pieces that many, including historians have traveled to the bank to see such as a “Le Rouge,” a French edition of John Mitchell’s 1755 map of North America which has been used a reference for the resolution of many significant boundary disputes. “We were looking for a particular battle flag and had contacted someone in New York City. It turns out that they didn’t have the flag, but they had the map. Sometimes when you are collecting, you are looking for one thing and then find something even better,” explained Drummond.

The Trenton bank location has an arts and crafts theme, while the Cedar Key location features a nautical theme. Recently expanding into Ocala and Gainesville, Drummond Community Bank is also unique in its financial offerings. “We are more than just a bank,” said Drummond. “We are a financial source for companies, commercial and consumer banking, a full brokerage service and offer insurance products through Nature Coast Insurance.”

“I am very proud of what my dad has built,” said Drummond Community Bank CEO Gray Drummond. “His grandfather first established a bank in Chiefland in the early 1940s, and when he passed away in 1973, the board elected my father to become chairman when he was in his late 20s.” This bank was later sold, and Drummond started Drummond Community Bank in 1990. Currently located near the intersection of Newberry Road and 34th Street, Luther Drummond is seeking a permanent location for the Gainesville expansion which will then be finished and decorated to reflect local history. 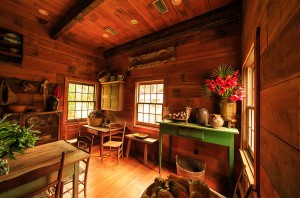 A Love of History Come to Life: Drummond Family Farmhouse

The Drummond family’s interest in historical artifacts also extends to their home and their farmhouse at Rocky Hammock Preserve in Levy County. Refurbished to its original charm in 1978, the authentic 19th century farmhouse is located on 600 acres, and will be the site of the annual Fall at the Farm fundraising event for Haven Hospice on October 22.

Previously owned by the Collier family, Luther Drummond and his wife, Kay, decided to purchase it in the 1970s. “Soon after the purchase, Kay and I drove out to the property. She saw the remnants of the farmhouse through the brush,” said Luther. “Kay fell in love with the house, and I did too. The property had been so isolated that there was still a bucket hanging in the well.” After researching the history of the house and the barn, Luther and Kay bought the adjacent property and decided to hire a contractor to take the buildings apart so that they could rebuild. “The contractor acquired antique sawblades, so that we could match any of the new cuts with the older pieces. And then we decorated it to that late 1800s period.” During the year, the farmhouse is lodging for the Florida Outdoor Experience, a business owned by Gray Drummond, who also shares his parent’s passion for local history and creating an authentic North Florida experience for those who visit the property.

“I realized what the area had to offer after having brought home friends from college to visit and taking them fishing and hunting,” remembered Gray, who bought and then reassembled a period-correct log cabin at Drummond Pond about 10 minutes from the farmhouse property for an authentic experience for his outdoor clients. On what continues to fuel is passion to keep local and family history alive, Gray noted, “There aren’t many people who can say they’re originally from Florida, but I had the rare opportunity to grow up in the same area where five generations of my ancestors lived.”

Although the farmhouse is somewhat isolated today, it was built on a road that was well traveled in the 1800s by those traveling to and from Cedar Key. “There has been evidence of several home sites found in the area which all date back to that period,” said Luther.

Another elderly visitor to the lobby of the Drummond Bank in Chiefland returned a violin that he had borrowed from Luther’s great grandfather when he was a young man. Having not returned the instrument to its original owner had bothered the man for many years, and he couldn’t find peace until he returned it to one of the descendants of John Drummond. The violin is now displayed in the farmhouse living room.

Many items in the farmhouse are not only personal, family heirlooms but also tell the history of Levy County. In the dining and kitchen area hangs a Chiefland sign above the kitchen counter which is originally from the Chiefland Train Depot. Before being moved back to its original location and used for community events, the building was bought by a group of men who moved it to Cross City to be used as a hunting camp. When Luther heard about this, he asked if he could have the sign to hang at the farmhouse.

A room located off the front porch and purposely separated from the main house was used during the 1800s to host circuit-riding preachers traveling through North Florida. The Ellzey Methodist Church existed during this time period, and the parishioners were served by preachers who most likely slept many times in this room. At other times, the room was offered to strangers who were looking for a place to stay.  The saddle bag placed in the room is a remembrance from a story passed down through the Collier family which told a tale of a stranger passing through who left the saddle bag filled with gold coins. He returned a few days later to find his gold still safely kept by the Collier family.

These stories, as well as the many pieces of history on display at the farmhouse and in Drummond Community Banks, are being preserved and shared by the Drummond Family for a new generation of local residents. 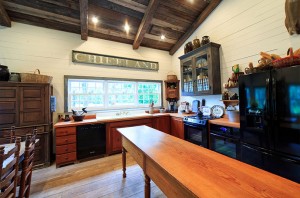 Quilt, Other Treasures Will be on Display at Haven Event

Ten years ago, the Drummond family farmhouse was the location for Fall at the Farm, a fundraiser for Haven Hospice families and caregivers. To celebrate the decade anniversary, the special events committee of local Levy County residents is bringing the event back to this beautiful location. “We have always been supporters of Haven Hospice in Chiefland,” said Luther Drummond. “We were involved in the capital campaign to raise money to build the care center and right up through the 10th anniversary of this fundraising event, which we are excited to host,” said Drummond.

“Attendees will have a unique opportunity to see a slice of history that has been so carefully preserved,” said Lynetta Usher Griner, a 2016 event organizer who also served on the first event committee with Kay Drummond. “The attention to detail that the Drummond Family has given to the farmhouse is unbelievable. It is truly a showplace of how life used to be in Florida.”

Each year, Luther brings out the Boone quilt and displays it at the Drummond Farmhouse between Thanksgiving and Christmas for special gatherings. However, attendees at the Haven Hospice Fall at the Farm Fundraiser will have the rare chance to see the quilt, the farmhouse and all of the antiques and historical items while supporting Haven Hospice’s unreimbursed patient care, grief support and community education programs throughout Levy, Gilchrist and Dixie counties.

“I think Samuel would have approved the break from tradition for this special event,” said Luther about showing the special quilt at the October fundraising event. “The fun and important part of collecting is sharing it with other people.” 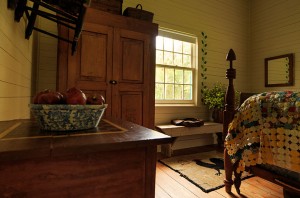