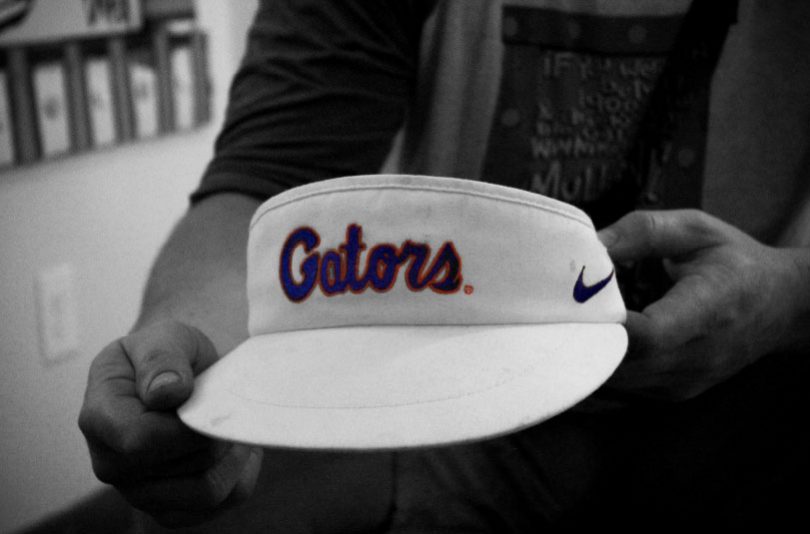 It was a rainy day in 1989. Steve Spurrier was the head football coach at Duke University, and the Blue Devils were facing off against Clemson in one of the biggest games of the season. It was a game that Spurrier was not expected to win. During his tenure at Duke, Spurrier said he would wear a visor on occasion, but the rain had him opt for a hat that day. The Blue Devils beat the Tigers 21 to 17.

“We upset Clemson so I said, ‘Man, I’m going to wear this hat the rest of the season until we lose,’” Spurrier said. “Well, guess what? We never lost.”

When Spurrier was hired as the head football coach at the University of Florida the following year, he wanted to set himself apart from the crowd. No one else was wearing a visor on the sideline as a college football coach back in 1990, he said.

“So, I just sort of told my wife, ‘I think I’m going start wearing a visor down there. Makes sense. Hot, sunny day, and so forth.’ So, I started wearing one.”

Part of the visor trend is comfort, but part of it is luck. The visor became such a symbol in college football that other coaches followed suit. Dan Mullen, Head Coach of the Florida Gators, wears a visor. Gus Malzahn (Auburn) and Hugh Freeze (formerly Ole Miss) also followed the trend.

“They all told me, ‘Coach, I saw you wearing that visor in the early ‘90s, and I started wearing one, too,’” Spurrier said. “It is a compliment, and I appreciate those guys doing that. Of course, I don’t think Bobby Stoops at Oklahoma had ever worn a visor until he became the assistant coach here [at Florida].”

It wasn’t necessarily style that attracted Steve Spurrier to the visor. It was comfort, and it was a need to keep his head cool while he played golf. However, the visor soon became a symbol, not only for Spurrier’s personal brand, but for the football coaching industry.

Spurrier, while coaching for the Florida Gators in the 1990s, made the visor famous when he would throw it in the heat-of-the-moment on the sidelines. The “visor throw,” as it came to be known, set Spurrier apart from other coaches in the industry.

“When you throw it once, and it’s caught on video, it can be shown forever. People assume you threw visors all the time,” Spurrier said with a chuckle. “I really never threw one to the ground that many times.”

Spurrier recalled his first visor-throw at Florida. It was 1990, and the Gators were playing Furman. The Gators’ wide receiver didn’t run a good route, and it resulted in a bad play.

“So, I took it off and fired it to the ground,” Spurrier said. “I was just mad because he knew how to run a good route, and it was against Furman of all schools. We still won the game, though.”

When he picked up his visor, Spurrier realized there were grass stains all over it.

“I thought, ‘Now, that is just stupid. You’re ruining a perfectly good visor,’” Spurrier said. “So, I tried not to throw them anymore.”

At Florida, the white visors were his favorites. Unlike most modern visors, Spurrier’s were nuanced with a wider bill, which created more of a square, clunky look rather than the sleek, modern style known in today’s era of coaching. He also liked the blue ones, and he really enjoyed wearing the black ones at South Carolina.

“A lot of times, I would just sort of take it off and flip it up in the air,” Spurrier said. “I realized that was a better way of releasing a little anxiety.”

It got to the point where Spurrier didn’t want to be known as the guy who was always mad, said James Bates, captain of UF’s 1996 national championship team. Bates now has his own painting business, which highlights famous coaches and moments in football history.

He always had a visor. Bates once did an animation of Spurrier from when he coached at Georgia Tech, and Georgia Tech was playing Duke.

“I had to draw him at Duke with a Duke hat on. It was so weird because I wanted to put a visor on him so bad,” Bates said. “He just doesn’t wear hats. He wears visors.”

Spurrier is the visor. He wears them walking up and down the beach, and he doesn’t seem to care, Bates said.

“He made it cool for so many coaches,” Bates said. “I never saw Coach Spurrier without the big-billed visor that always looked kind of goofy. That’s why I like to draw it.”

Bates’ college roommate, Eric Kresser, used to cut his hair when the two of them played football at Florida. It was a bowl cut with the sides shaved, and Bates has done self-portraits that highlight the child-like hairstyle.

One day, Bates said Spurrier asked him who cut his hair.

“Well, Kresser does, Coach. You should let Kresser cut your hair,” Bates said. “And he goes, ‘Shoot, why would I wanna look like a little boy?’”

Going without a visor for Spurrier would be like going without shoes, Bates said. It’s a comfort thing, and it’s part of his routine.

Upon being hired as Florida’s new football coach, Dan Mullen said he wears a visor to be like Spurrier. It’s almost like there’s a superstition or luck wrapped into being like Spurrier.

“Anybody who embraces everything that is Coach Spurrier, that’s where the luck comes from,” Bates said. “The visor may be the token, but anyone who comes in here knows that this is the house where Steve Spurrier came from, and they really kind of respect that.”

Spurrier is the guy who made it all happen and made everything possible, Bates said. Any time he’s around, it’s a pretty special thing.

Bates is working on a painting of one of Spurrier’s visors. It will feature a halo above it to symbolize how great the head ball coach was. 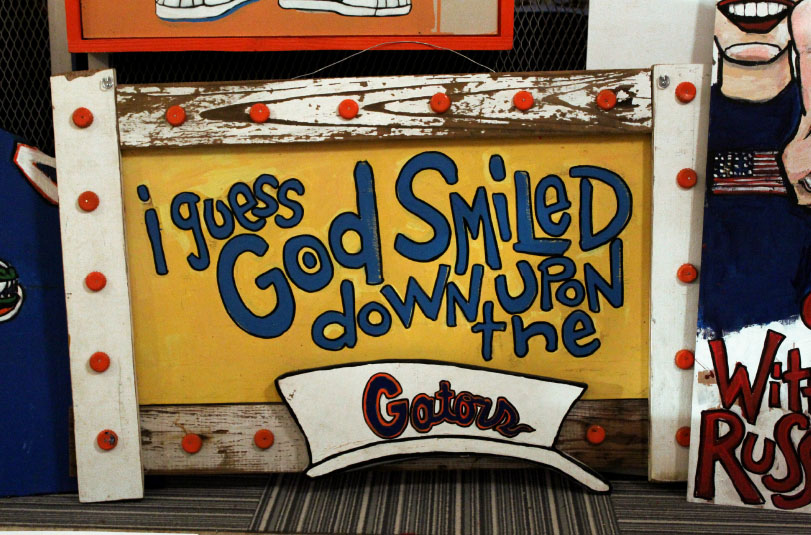 James Bates’ art depicts Spurrier and other coaches as caricatures. He uses famous quotes and characteristics to personify coaching legends.

“He may not even admit to throwing the visor one time,”Bates said.

At a reunion in 2016, Bates said Danny Wuerffel got up to light-heartedly call out Spurrier for his competitive moments. It was all in good fun, he said. Coach Spurrier laughed it off.

No one really noticed the visor until Spurrier became the head coach at Florida, said Pat Dooley, sports columnist for The Gainesville Sun. It was because of the visor that everyone started calling him Darth Visor.

“The biggest thing was when he threw it,” Dooley said. “It suddenly became a story because he was the coach who threw his visor.”

Being a Gator in the ‘90s was exciting, Dooley said. The Gators were winning with such excitement and gusto that it created a fun culture, and that’s when the other coaches wanted to be like him and win national championships.

“Visors are comfortable,” Dooley said. “But, it’s like Steve made it OK to wear a visor.”

Dooley reminisced on one particular game when Florida played Ole Miss. Spurrier had been upset with a call by the officials.

“He kept going up and down with the visor, and he finally pulled it down over his eyes,” Dooley said. “That’s part of the reason why he liked it. It was so versatile.”

During the bitter Florida/Georgia game, Spurrier would remove his visor in the Georgia dome. He had been taught not to wear a hat indoors, and he thought that applied to visors, as well.

“[When he said that] everyone was like, ‘What? Who still believes in stuff like that?’” Dooley said. “Meanwhile, in the stands, everybody’s got a hat on.”

“The reason for the visor throws [in football] is because Steve is the most competitive person I’ve ever been around,” Dooley said. “He once got a black eye playing ping-pong when he was diving for a ball.”

Steve Spurrier has been announced as the first coach in the new professional football league, Alliance of American Football. It’s intended to be a spring league, and its host city will be Orlando. Games will be played in eight different cities nationwide, and each team will play 10 games per season.

It’s unclear what the new coaching job will mean for Spurrier, however, there is a good chance his visors will make an appearance.