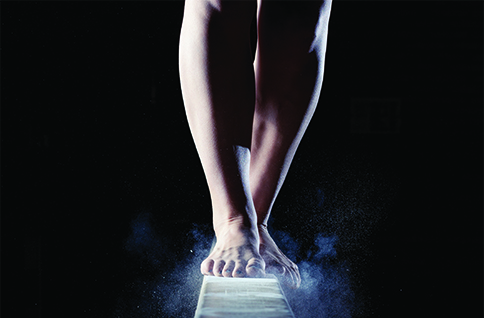 Written by Photographed by Allison Durham 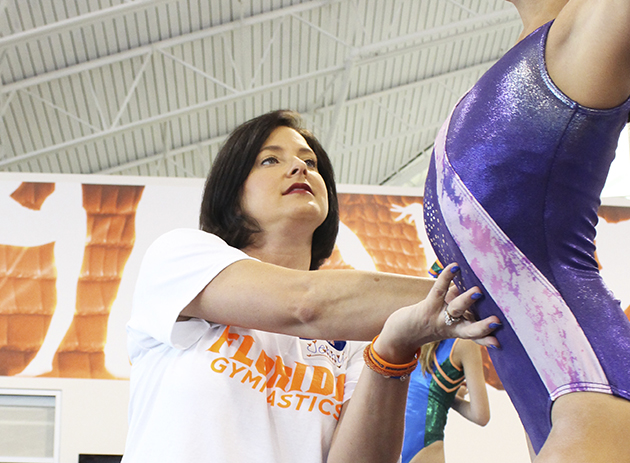 Jenny Rowland’s life has been up in the air lately. Fortunately, she has some experience up there.

Rowland is a gymnast, and as gymnasts go, she’s one of the most famous and decorated in the world. She competed on the U.S. National Team and the 1989 U.S. World Championship team, was an All-American on uneven bars at Arizona State University and a coach at Auburn, and she still serves as a national and international judge.

In May, Rowland was named the new head coach of the University of Florida women’s gymnastics team, and she uprooted her life at Auburn and moved to Gainesville. She’s still waiting for her husband and two daughters to arrive.

“I’ve been in Gainesville for three weeks,” Rowland said, sitting in her office at the O’Connell Center. “It has been absolutely amazing, nonstop, temporary insanity. I’ve been really busy.”

Apart from the normal getting-to-know-you routine, Rowland has been leading gymnastics camps at the O’Connell Center while also going on the road to meet recruits.

“The recruiting process is important,” she said. “I’ve been on the road visiting those girls who have already committed and letting those athletes put a face with a name. It has been a very overwhelming experience in a very positive way. Being involved with gymnastics as long as I have, a lot of the coaches already knew who I was coming in. Gymnastics is a small world. Knowing me and the knowledge I can bring to the table, they felt comfortable with having their gymnasts come to Florida.”

Rowland’s reputation comes in handy, as she has big shoes to fill. Departing head coach Rhonda Faehn led the team to three straight NCAA titles and four Southeastern Conference titles, but Rowland said her first goal is to win again.

“Me being a competitor since I was young, that’s a number one goal,” she said. “The girls have that same thought process.”

The gymnasts, of course, are tried and true collegiate competitors who have also competed on the world’s biggest stages. The team includes Bridget Sloan, who was a silver-medalist at the Beijing Olympics, as well as several All-Americans.

Rowland said another main priority is gaining the team’s trust.

“Coming in, we had a team meeting and I gave a little background of who I am,” she said. “Them knowing my history and what I’ve been through and how I got to where I am, they can appreciate that because they’re going through a lot of those same experiences. That trust will come, and it’s already started to gel.”

Of course, Rowland’s breadth of experience in gymnastics helps that trust come more easily, as it did for UF Athletics Director Jeremy Foley.

In a May press release, Foley said, “When we started this search, there was one name that kept coming up — Jenny Rowland…She knows what it is like to be a competitor on the national, international and collegiate stages. She has what it takes to be a successful recruiter, as she’s built relationships with so many in the gymnastics world.”

As a former competitor in all four events, a coach and a judge, Rowland has an uncommonly keen perspective on how to perfect each routine.

“With every different hat that I wear, I have gained knowledge,” she said. “I feel it has helped me as a coach. I see a lot of detail.”

And while she admits it is far more nerve-wracking to watch her gymnasts compete than it was to compete herself, Rowland lives by three words: trust your training.

“I tell the girls, ‘Trust your training,’ and I tell myself that to this day,” she said. “I just have to trust that I’ve trained the athletes to the best of my ability. Trust your preparation, and let it go.”

It’s good advice to follow. Rowland’s life is settled. Her husband and daughters are in Gainesville, official gymnastics practices are underway and the new season will hit the floor in January, when her training will be put to the test.

Until then, all she can do is trust.