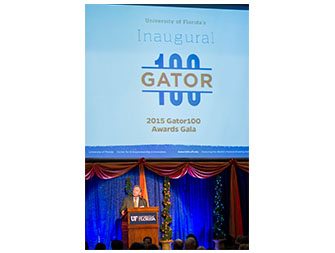 The University of Florida’s most innovative and emerging companies were celebrated Friday at the inaugural Gator100 Awards at UF’s Reitz Union Grand Ballroom.

Sponsored by UF, the Warrington College of Business Administration and the Center for Entrepreneurship & Innovation, the Gator100 recognizes the 100 fastest-growing businesses owned or led by UF alumni. Ernst & Young calculated each company’s compounded annual growth rate over the past three years to generate the ranking.

Fifteen of UF’s 16 colleges were represented in the Gator100, led by Warrington with 41 companies appearing on the list. The College of Liberal Arts and Sciences was second with 16 companies represented, and the College of Design, Construction and Planning was third with 15.

The top-ranked company was SoloHealth, an Atlanta-based health and wellness company. Founded by business alumnus Bart Foster (BSBA ’97), SoloHealth provides self-service kiosks in more than 4,000 locations nationwide, including Walmart, Safeway and Sam’s Club. These kiosks — known as SoloHealth Stations — screen users for a variety of health and wellness matters while providing an overall health assessment and educational information.

Abode, a property management company in Park City, Utah, owned by business alumnus Rob Alday (BABA ’03), was No. 2 on the Gator100. PDQ (People Dedicated to Quality), a fast casual restaurant chain based in Tampa and led by CEO and accounting alumnus Nick Reader (BSAc ’97), was ranked No. 3.

SoloHealth, Abode and PDQ were the only companies to achieve a compounded annual growth rate of more than 200 percent.

In addition, UF honored four alumni-led companies with Pinnacle Awards, which recognized established Gator-led businesses that have made a significant impact over time through job creation, revenue generation and innovation in their industries. Those companies were Howard Fertilizer and Chemical Company, Inc., in Orlando; Saddle Creek Logistics Services in Lakeland, Fla.; Starling Automotive Group in Orlando; and TransPerfect in New York.

To qualify for the Gator100, companies must have been in business for five years or more as of September 2014, and have had verifiable annual revenues of $100,000 or more in 2011.

Additionally, a UF alumnus must have met one of the following three leadership criteria: