Seeing your teenager behind the wheel of a car for the first time can be terrifying. While he feels liberated by his newfound independence, you may stop short as you feel yourself losing control.

For Rick Staab, the transition didn’t start when his 16-year-old son, Tyler, got his driver’s license.

It started in 2005, when Staab and 7-year-old Tyler were playing basketball. As Tyler tried to shoot the ball, his arm began to shake uncontrollably. In the following months, the family waited in uncertainty for a diagnosis.

By the time Tyler was diagnosed with dystonia, his condition had worsened, and he could barely talk or walk.

Dystonia is a disorder characterized by involuntary muscle contractions that cause slow, often painful, repetitive movements or abnormal postures, according to the National Institute of Neurological Disorders and Stroke website.

As soon as Staab and his wife, Michelle, received the diagnosis, they started looking for treatment options and discovered that UF Shands has many doctors and researchers noted for their work in dystonia treatments. However, the family wanted to do more than just treat the symptoms. 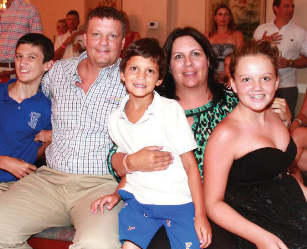 Staab established Tyler’s Hope for a Dystonia Cure in 2006 to raise money for dystonia research.

“They classify it as a disorder instead of a disease because there is no degeneration of cells,” Staab said. “If you can get the mixed up signals correct then they’re cured.”

Since then, Staab has worked every day to release his children — Tyler and 13-year-old Samantha, who later was found to also have dystonia — from the disorder that threatens their freedom to lead normal lives.

Since 2006, Tyler’s Hope has raised about $4 million, transforming the University of Florida into one of the top research centers for dystonia.

In 2008, the UF Center for Movement Disorders and Neurorestoration, co-directed by Dr. Michael Okun and Dr. Kelly Foote, became the home of the Tyler’s Hope Center of Excellence,.

Tyler’s Hope funds risky yet promising projects that continue to make breakthroughs in curing dystonia; the organization’s efforts have also received the support of larger organizations such as the National Institutes of Health.

Every day, news arrives of new drugs and treatments, but there is still more to be done.

Participating in Taste of Gainesville can make the difference between finding a cure or not.

“If we get a dollar from Taste of Gainesville and set up a research project, they may get 10 dollars the next year to get in there and speed up this research,” Staab said. “So, whether it’s a dollar or 10,000 or 30,000, that money is worth three to four times that amount to us.”

The charity does more than fundraise; it raises awareness and helps others find hope. People who are blindsided by the diagnosis and want reassurance that things will be OK call daily, Staab said.

“It’s definitely a good feeling when you can be there for someone who is confused and scared,” he said.  “All of us have dystonia or care about kids who are affected by it. You feel like you’re part of a team that’s really going to make a difference.”

“All of us have dystonia or care about kids who are affected by it. You feel like you’re part of a team that’s really going to make a difference.”

Today, as Tyler drives his little brother to the movies or Samantha drives a volleyball over the net, the impact is clear. Although more than 500,000 Americans with dystonia wait for a cure, they are not immobilized. Continued innovative research and treatment options are allowing them to regain their independence, one step at a time.