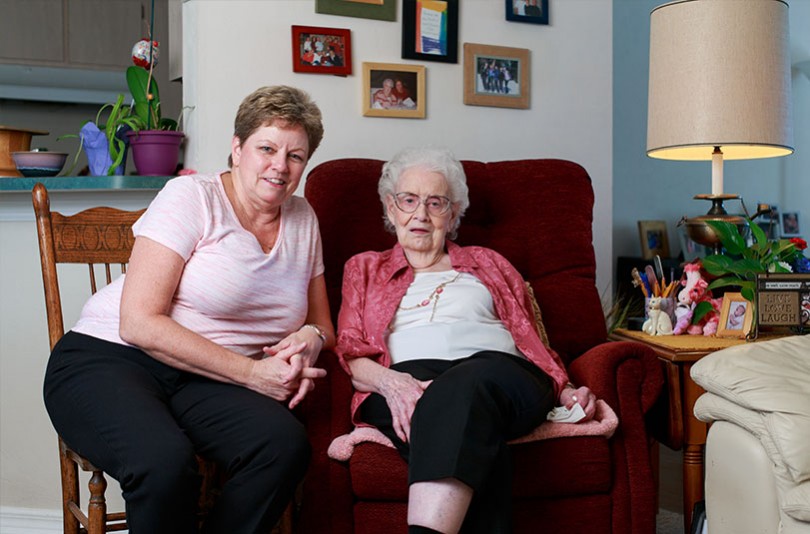 Barb Wills, Margaret Atkinson and their three adopted dogs make their home in a tranquil Gainesville neighborhood peppered with colorful flowerbeds. When the weather is fine and the open road calls, Barb and Margaret get out the “adventure chair” and go on a field trip. The adventure chair is Margaret’s wheelchair. In the fall of 2015, Barb became caretaker to her 92-year-old aunt, who once did the same for her.

Barb was 7 years old when she lost her mother to breast cancer. Carol Wills died in July 1965 after battling the disease for a year. Margaret — Carol’s younger sister — had moved into the Wills’ home in Indianapolis to help care for Carol during her illness. When Carol died, Margaret stayed, living with Carol’s four children and their widowed father until he remarried. Mr. Wills worked nights and Margaret worked days, raising the children between them.

Barb and her brother Jim were the youngest, and they became closest to Margaret after their mother’s death.

“We were bonded at that moment,” Barb said. “Neither one of us understood. We didn’t know why everyone was crying. They did try to prepare us, but a child doesn’t have the experience to really understand.”

In the wake of their loss, many people offered pity rather than kindness. Margaret, however, never made them feel like victims. She liked and understood the young Wills children, treating them with tact and respect and encouraging their individuality, a quality that Barb recalls to this day.

“She always took us shopping for school individually,” she said. “That was cool. I wasn’t a girly-girl and my older sister was, so I liked having my own stuff and being able to pick out my own clothes.” 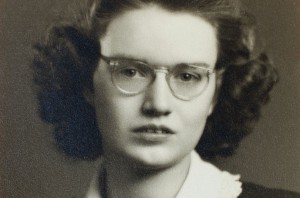 Even after Mr. Wills remarried, the children remained deeply attached to their aunt. To their relief, she bought a house only 5 miles away.

“Our stepmother was a nice lady but not really a mother-figure,” Barb explained. “That was kind of hard for us. So, we spent quite a bit of time at Margaret’s.”

Barb attended Indiana University, where she majored in biology. Whenever she returned home during vacations, she stayed with Margaret.

“I didn’t have any money, so I helped out around the house and yard,” she remembered. “We had this running joke about how much each thing I did was worth. We always got along. I don’t remember ever having any friction. We’d go out shopping or something, and everyone thought she was my mother. We never corrected them. We’d just smile at each other.”

Although originally a pre-med candidate, Barb realized she didn’t have the temperament to be a doctor. She moved to Texas, where she earned her MBA and built a career in marketing within the pharmaceutical industry, combining science with business. Eight years ago, she relocated to Gainesville.

As Margaret aged, her mobility decreased. It became clear that she needed full-time help: She was worried about falling, and the Indiana winters were hard on her. She considered moving into an assisted-living facility, but no facility would allow her adopted dog, Goldie, to accompany her.

“She’d spent two or three winters here,” Barb said. “I’d go up there for Christmas with the family and then drive her and Goldie down here. I’d make sure she got back home in time for her birthday in April so she could be with everybody.”

Finally, in the summer of 2015, Barb asked Margaret whether she would like to move in permanently.

“She called me and told me to get my dog and my stuff and come down,” said Margaret, grinning. “It didn’t take me long to say yes.”

Aside from mobility issues — she uses a walker inside the house and the wheelchair when she goes out — Margaret has no major medical problems and takes almost no medication. She has some short-term memory loss, which is usual for her age.

“We have fun with that,” Barb said. “She hasn’t lost her sense of humor.” 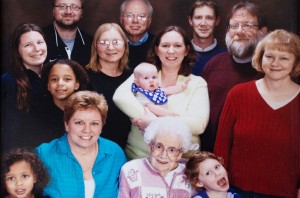 Barb did ample research to obtain the right local care for Margaret. She was directed to the North Florida Senior Healthcare Center, where she found an excellent primary doctor. The group is wholly focused on seniors and able to refer patients to specialists with geriatric expertise. They also prepare any paperwork needed in case of hospitalization. Furthermore, each patient is assigned a caseworker, a great resource person for finding other senior services in the area. To provide weekday care for Margaret while Barb is at work, Barb selected a private company with caregivers who all have medical training. Not because Margaret needs it, but because she might.

She and Margaret also took their time interviewing potential caregivers to ensure a good personality match.

“Margaret really does well with gals in their 20s and 30s,” Barb said. In Margaret’s experience, older women can sometimes become too personal or patronizing, whereas younger ones are happy to discuss general subjects and speak to her as they would to anyone else.

“I don’t look at her as being disabled,” Barb explained. “She needs help, but I really try not to take her choices away. I wouldn’t want someone to treat me that way.”

People forget that getting older does not mean becoming less adult. Some individuals tend to treat the elderly like children and often make incorrect assumptions about their capabilities.

Margaret has always been organized and self-reliant. She worked as an accountant for General Motors for 37 years. She still receives her pension and the wonderful health insurance she earned. She has now lived a third of her life in retirement and imagines, laughing, that whenever the GM board of directors looks at the list of pensioners, they must wonder: “Isn’t she dead yet?” She has pre-paid her funeral and has all her affairs in order.

“That is all part of being independent,” Barb said. “I’m the same way. She and I understand each other in a way that others in the family don’t. I’ve never been married, never had children. She raised us, but she didn’t have her own children per se, and I understand that independence. I feel the same way about assisted living. I don’t want to go to assisted living. Not because they’re not lovely places (but) because I like my space around me and like being independent, and that’s how she feels, too.”

Living together again after so many years, niece and aunt have discovered they have even more in common than they thought. Both love trivia and solving puzzles, so they watch “Wheel of Fortune” and “Jeopardy” while cooking dinner. On Saturday mornings, a caregiver stays with Margaret while Barb, an avid cyclist since her college days, takes a bike ride, runs errands and catches up with friends. The rest of the weekend they spend together. They share a passion for golf, so they attended the PGA Tour Players Championship in Ponte Vedra this year. Both are animal lovers, so they regularly visit Animal Kingdom and the Jacksonville Zoo. Margaret wears her straw hat and lots of sunscreen on her beautiful fair skin. Shopping in Jacksonville is also a favorite day-about-town. 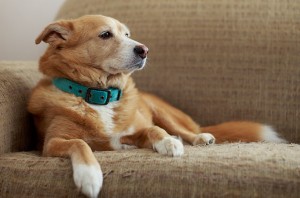 “I plan ahead,” Barb said. “If I know we’re going to go have an adventure, I rest her up for a few days…and off we go!”

Margaret points out that they can’t stay away long, however: “She’s got her dogs, and I’ve got mine.”

Even now, Margaret remains a nurturer and protector: Goldie has become her last dependent.

“I’m 92, and I still have a dog,” she said proudly. “It really was nice that Barb let me bring her. I wouldn’t have come if I couldn’t have brought her.”

Barb finds it is perfectly possible to work around her care of Margaret. Her friends and neighbors provide a great support network. She also finds that after living alone most of her adult life, it is fun to share her home with someone she loves and likes.

“The biggest thing is that I feel I’m getting back all the time I gave up by moving away,” she said. “I left Indiana when I was 25 years old, so I gave up a lot of time with her. After being a nomadic professional for over 20 years, I have a closeness that I didn’t have before. It’s an honor and a privilege to have her here.”

Margaret prefers not to travel anymore. Long trips and airplanes have become too arduous for her, so family members visit throughout the year.

“I’m 92,” the family matriarch said, with a mischievous smile. “They can come see me now.”

In memory of her mother, Barb created The Power of 2, a nonprofit group that raises awareness and money for breast cancer research.

“Most of the women who contract these deadly cancers are pre-menopausal and have children,” Barb said. “If we can keep one child from losing her mother, we’re pursuing our goal.”

The organization has raised $70,000 to date. The funds are often used as seed grants to do foundational research, a requirement for the larger National Institutes of Health grants. The first seed grand turned into a $1.6 million grant, according to Barb.

The organization’s charity bicycle race, the Pink Pumpkin Pedal-Off, is held annually in Gainesville. In 2015, Margaret attended the race with her caregiver and got to cheer

Barb on. The next event will take place on October 1, 2016, and 500 cyclists are expected to participate. For more information, visit www.pinkpumpkinpedaloff.org or email [email protected].