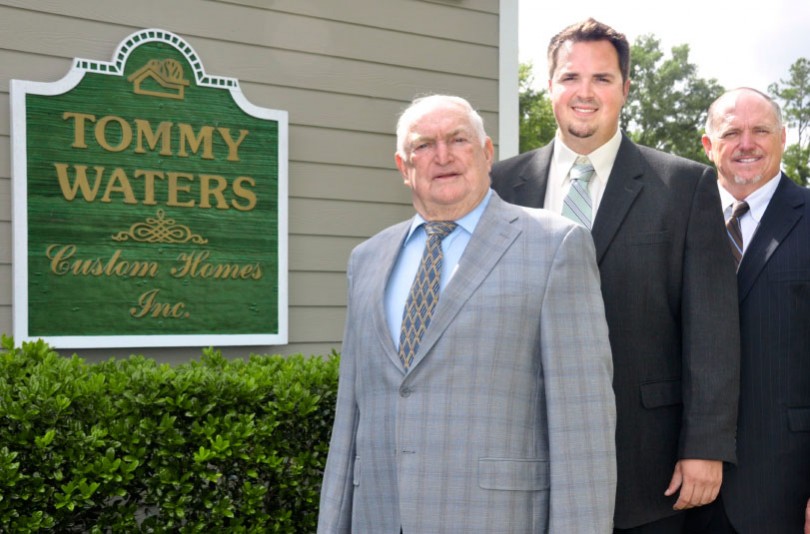 For three generations of the Waters family — Robert, Tommy and Derek — building homes is a life calling. “The truth is, you never get it out of your sys-tem,” jokes Robert Waters, the family’s trailblazer in the industry.

The Waters’ legacy in building construction began in 1954 when Robert built his first home in Alachua County. A young student and baseball player at the Uni-versity of Florida, Robert arranged his class schedule so that he could also work several days a week building houses with his brother-in-law. Raised on a small Florida farm, Robert found great reward in the hard labor of construction, and was soon building homes full-time.

“I was born in a house that didn’t have running water or electricity, but people can’t understand that today,” said Robert. “We worked hard, and I always figured the harder you work, the bigger the reward. We were never afraid of work, and we’re still not afraid of work.”

This appreciation for hard work was passed down to his son, Tommy Waters, who founded Alachua County-based Tommy Waters Custom Homes Inc. over 30 years ago. Tommy started going to job sites with his father when he was just eight years old, helping with clean-up and earning the nickname “Tomcat” from the builders.

“That’s why I got interested in building, because I liked all the people in it,” re-membered Tommy. “The main thing I remember about working with my dad, though, is how hard he used to work and how hard that got me to work.”

The experiences gained working every job on the job site helped immeasurably in understanding what needs to get done as a construction manager, Tommy said. Tommy continued working for his father throughout his teenage years, eventual-ly building his first home at 17. When Tommy was 25, Robert suffered an acci-dent that forced Tommy to step in to help run the business. “Believe it or not, we’ve never had a fight,” said Robert. “He did his job and I did mine.”

“[My father] taught me the morals of the business. Treat people fairly, be honest, [and] work hard to do your job, and everything takes care of itself,” said Tommy. To help his son get the same benefit of experience, Tommy had Derek Waters start working on job sites while he was in high school.

“I think that was pretty important to get a lot of hands-on experience,” said Derek. “You’ve got to earn it. You’ve got to get out there and frame houses and learn the process.” Derek went on to the University of Florida to pursue a jour-nalism degree, but after spending more time at his father’s job sites, he was hooked on construction. “A lightbulb just went on really,” he said.

At Tommy’s suggestion, Derek changed his focus to studying electrical work, an increasingly important trade in today’s hyper-connected world. “I wanted him to learn another side of the picture, from a subcontractor standpoint,” Tommy ex-plained. Derek was 24 when he built his first home. Unlike his grandfather’s first project where he and his crew could easily build every part of the home, Derek’s first project required coordination amongst dozens of specialized individuals and businesses.

“The first house I built, I remember going down [to city hall] with one sheet of paper and $5 for a permit,” recalled Robert. “Now you have a stack [of papers] several feet high and it takes five weeks to get it together,” laughed Tommy. “But on the other side of the coin, we’re building a wholly different and better house now than we did then.”

Technological improvements like hurricane-proof windows, fiberglass roof shin-gles, tankless water heaters and integrated security systems require individuals with a wealth of specialized knowledge. Because of this, subcontractors are a much bigger part of the construction industry today than they were during his fa-ther’s tenure building homes. “When dad came up, we did everything,” said Tommy. “When I came up, it started to be that different trades specialized in dif-ferent areas. Even more so now [with Derek], there’s so many businesses in-volved. It’s a different world.”

Luckily, over the years they’ve cultivated a network of exceptional subcontrac-tors, including other family-owned operations, like Crime Prevention Security Systems. Building those relationships takes time, but is ultimately the only way to create the highest quality home, said Tommy. “They want to work with some-one who builds great houses,” he said. “I think [the subcontractors are] honored that they get to build our houses just as much as we’re honored that they’re working on it.”

The loyalty extended to subcontractors is also extended to employees hired by the Waters. Some employees have been with the company for 25 to 30 years, a point of pride shared by all three generations. “The first man I ever hired worked until he got Social Security,” Robert said.

Like true Alachua County natives, the Waters use pivotal moments in Gators’ football history to mark time. A key year in Waters Construction history — 1966, when Robert decided to dedicate himself to building custom homes full-time — is remembered because of Larry Smith’s 94-yard touchdown run in the Orange Bowl and former UF Football Coach Steve Spurrier’s senior season. The Waters later built a custom home for Coach Spurrier in Gainesville, as well as all of the houses for the UF football coaches in the last 25 years. Many of them have be-come repeat customers. “You don’t stay in business in one town for over 50 years by doing something wrong,” noted Robert.

Although he officially retired 15 years ago, Robert says he will never fully leave the construction business. Watching the Waters name flourish under his son and grandson’s leadership has been a great joy, he said. “[Tommy] took the company to better places than I ever did — let’s put it that way — but he still kept those core values,” said Robert. “I think after all these years of hard work, the Waters name is pretty synonymous with quality, excellence and client commitment,” Tommy said. Ultimately, the men agree, building up the name Waters has been their greatest collective feat of construction.