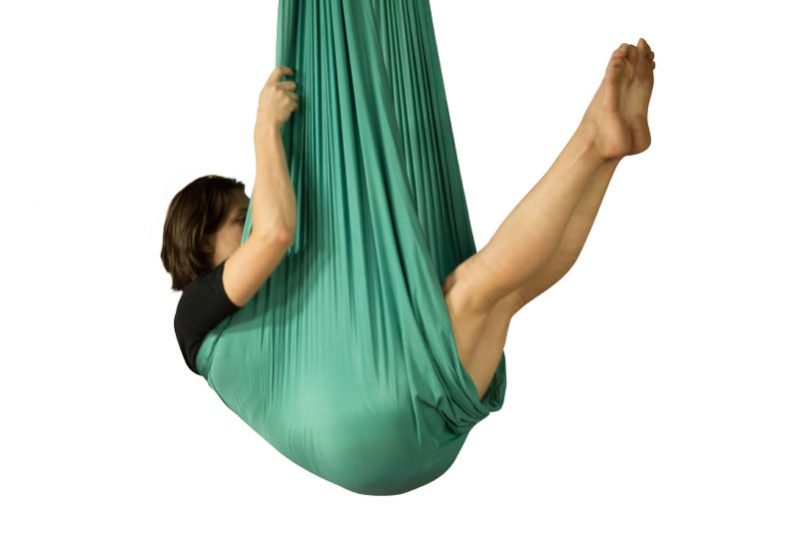 “I am not a fan of yoga. I think I have taken two yoga classes in my entire life and walked out immensely agitated and distressed both times. With that said, I have never had a more enjoyable experience exercising than I did at an aerial yoga class with S-Connection Aerial Arts.”

Corey Souza founded S-Connection LLC with her husband in 2007 and moved it to its downtown Gainesville location in 2015. S-Connection offers a variety of classes ranging from aerial yoga to Brazilian dance.

Aerial yoga is one of S-Connection’s newer practices and is a way to make circus classes as accessible as possible.

“Aerial fitness and yoga were ways we could branch out and offer things for people who weren’t necessarily trying to be a professional acrobat but wanted to do something more interesting than running on a treadmill,” Souza said.

S-Connection is small in size but large in heart. Even though all of the other students had taken the class before — some for a couple years — I felt at ease. 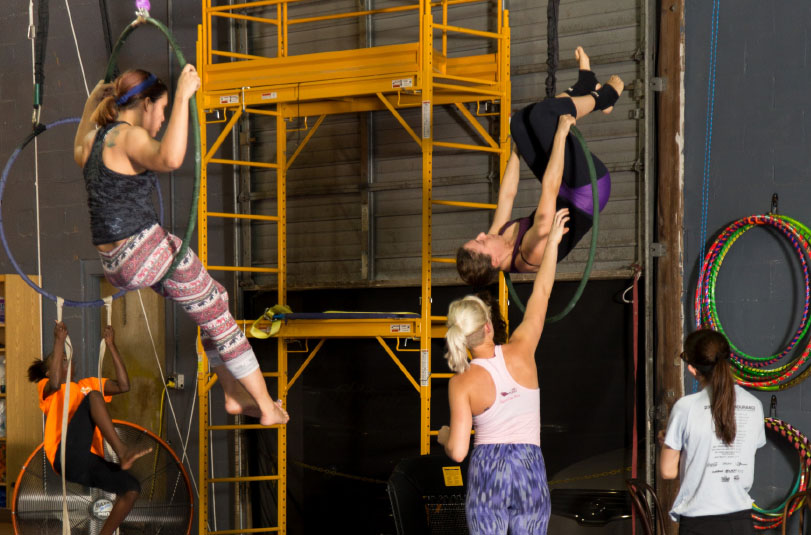 “The minute I walked into this place, the community sucked me in,” said Madelyn Hyder, who has taken S-Connection classes for 3 years. Hyder could not have worded it better; everyone was extremely welcoming and eager to spread the joy of aerial arts.

The class began with simple warm-ups and escalated in difficulty. Souza offered opportunities to try both a more difficult version and an easier version of each movement. She recognizes that everyone’s bodies are different and, therefore, cannot do the moves with the same amount of flexibility. I enjoyed the options I had during the class because I never felt uncomfortable. I also loved the ability to be able to challenge myself. 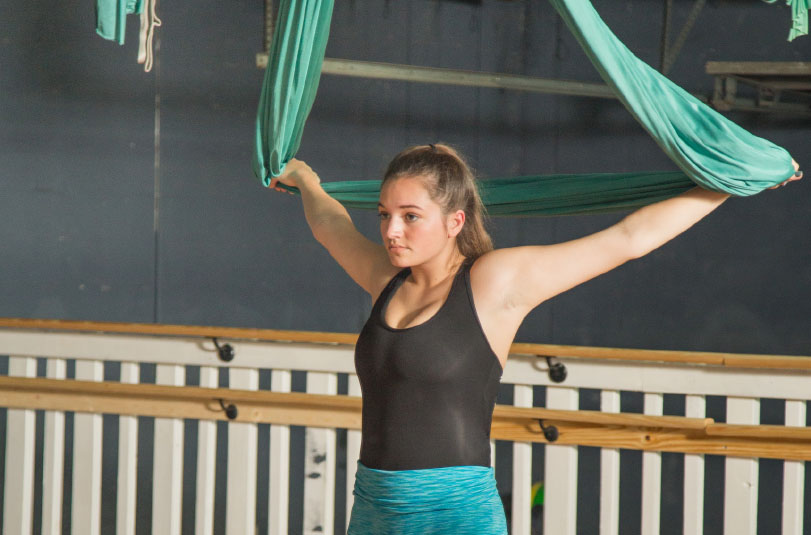 The first opportunity Souza gave us to go upside down, I took it. I had seen pictures of people doing crazy flips and twists in the air with the ribbons, and I wanted to try it. I didn’t expect to turn as quickly as I did. As I leaned back against the ribbon, according to her instruction, I found myself tilting more and more until my head was an inch from the ground and my legs were wrapped around the ribbon. It was truly exhilarating.

Personally, I would take an aerial yoga class over a regular yoga class any day. Conversely, Souza appreciates ground training because she comes from a background in Brazilian dance. Although both types of training have benefits, aerial arts allow for certain movement pathways that are not available without the help of an apparatus (any mechanism that assists suspension.) 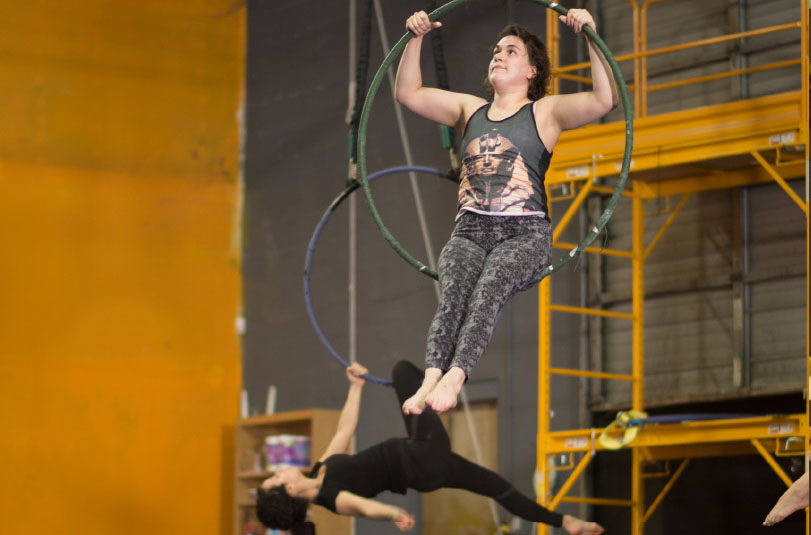 After the class was over, I felt stronger, more flexible and even a bit challenged — the good kind of challenged where you want to keep coming back until you feel like you have mastered it. I was also able to see a few of the other classes like kid’s circus classes and aerial fitness classes. Seeing all of the other opportunities only made me want to come back even more because I felt like I truly wanted to try everything.

“I think it’s important to take everything,” Hyder said. “Even if you’re not a dancer, take samba; if you’re not flexible, take yoga because they all help each other.”

S-Connection trains professionals but also those who want a different exercising routine.

In addition, it offers several opportunities for all ages and sizes to perform. That was another part about S-Connection that I found so unusually beautiful: the number of families. Souza said there are a lot of families that both train and perform together. 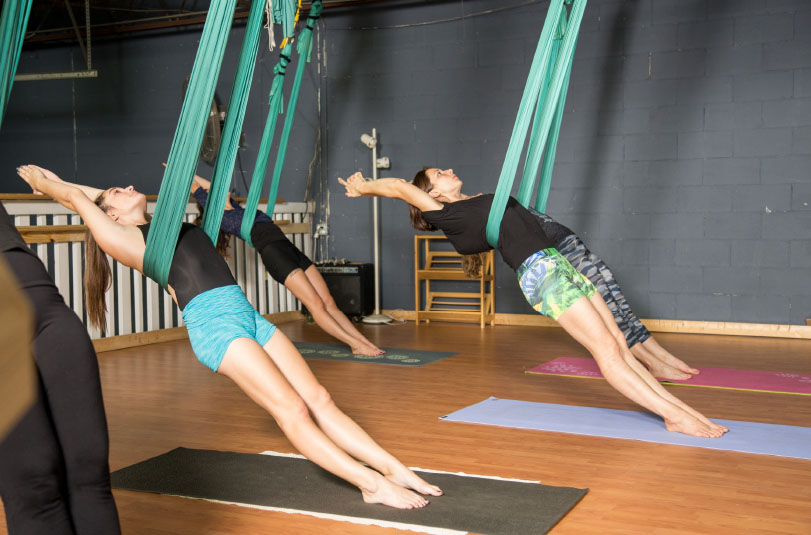 The popularity of aerial arts has skyrocketed over the past year, causing class sizes to increase and more body types to attend. Aerial arts, although seemingly intimidating, is doable for almost anyone. It is not only a fun and exciting way to exercise but also an opportunity to appreciate a lesser-known art form.      “Everyone should come and try it at least once,” Hyder said. “Who doesn’t want to fly?”