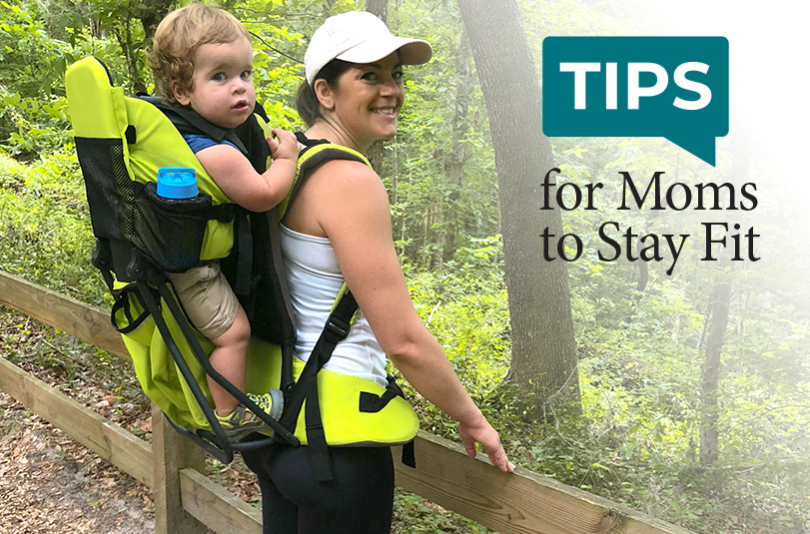 From hiking the Devil’s Millhopper, to turning the local park into an outdoor gym, there are many possibilities for moms to stay in-shape.

Brinn Strange, mom and owner of AUXO Fitness studio in Gainesville, said the only way a mom can really provide the best care for her family is if she takes care of herself. After having a child, it’s important to stay healthy and to focus on that which can improve your life and the life of your child, she said.

Strange has run AUXO Fitness (formally Barre Forte) for about three years. After she began her business, she had her first child, Brandon. She was teaching a class the night before she went into labor.

Between running a business and being a mom, Strange manages to teach 10-15 classes a week and also work out.

She also helps her clients come up with creative ways to schedule their daily activities, so they can make it to the studio.

It is possible to find time to work out while being a mom, she said. For her, exercising early in the morning is what works. She usually runs in the morning before her 2-year-old son wakes up.

When she’s not at the studio, Strange tries to incorporate fitness into activities with her son.

“I can push him in the jogging stroller and take him on the run,” she said. “I’m showing him that it’s important to get outside every day.”

Her “30-pound chunk” is the perfect weight addition to any work out. She holds her son while doing squats and straps him on her back while hiking. Strange and her husband go to Paynes Prairie and Devil’s Millhopper during the weekends with their son to enjoy the outdoors and get in some exercise.

Strange is now expecting her second child, due in April, and intends to continue her fitness routine. 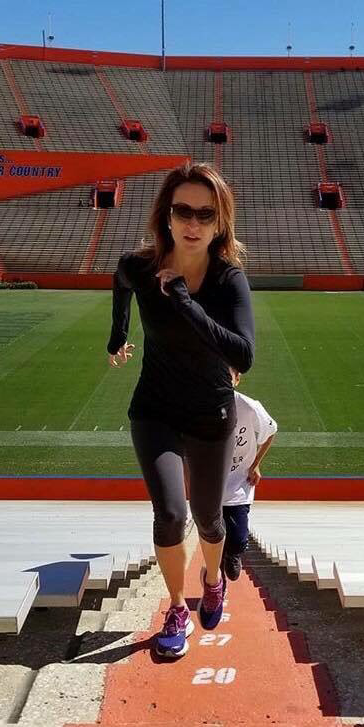 Claudia Cometa, also a working mom who runs the Peace Advocacy Group, has a 10-year-old and manages to work out three to four times a week. Cometa, who runs half-marathons, said she tries to exercise right after she drops her son off at school, then she typically works from home the rest of the day.

Cometa’s son was born in 2008, and she started running in 2012. She usually attends a running club in San Felasco Hammock Preserve State Park on Sunday mornings.

“I have always been active in some way,” she said, “so, it was really tough having a kid and trying to juggle all of what was going on.”

She said it was really difficult to figure out how to run with a small child, but she began bringing him along in the stroller. She would also bring him to running groups and let him play in the middle of the track while she gets her mileage in.

“I struggled for a while trying to figure out how to exercise and put him somewhere, whether it’s childcare or whatever, then I realized it’s easier to just incorporate him,” Cometa said.

Now that her son is older, it’s easier to bring him along to running events. If there is a child’s one-mile race, he will usually run it.

Another fit mom, Ashley Finnegan, is a mother of two boys. She runs her own business called Mom CEO. With all of her involvement in the business, marketing for her husband’s business and the MomsEveryday Show on TV20, Finnegan said she used to prioritize everything else before her work outs.

She studied exercise and sports science in college and had always been very healthy, until she let her busy schedule take up all of her time. Now she has her workouts marked on the calendar as a reoccurring meeting. Everything else she does, she plans around these workouts.

“Life’s about balance,” she said. “There is no ‘one size fits all’ program for somebody, but what I will say is that putting those things in my calendar and sticking to them has really made a huge difference.”

She does weight training twice a week after she drops the children off at school. She also attends fitness classes and walks three miles with her husband at least once a week. Her family spends a lot of time outside, whether it’s swimming, walking or chasing the children in the backyard.

The first year after having children is the toughest, she said. There’s so much devotion to one little life, so it’s easy to feel guilty hiring a babysitter to go work out.

“But as a mom, you have to figure out what works for you,” she said.

There are so many resources for moms, and fitness groups to join, so there are always people to hold you accountable, she said.