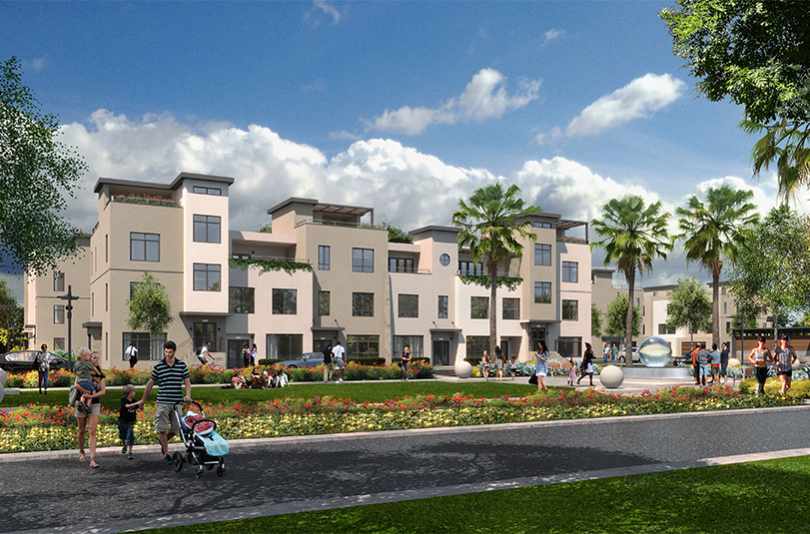 When John and Deb Maguire of Gainesville were ready to sell their house, they knew what kind of home they wanted next. The retirees also knew what they did not want.

“We had a pool and about an acre yard,” John explained. “It was becoming too much to keep up with it, so we decided it was time to look at downsizing.”

The couple agreed the ideal home for them was a condo or a townhouse, where someone else would take care of the pool and yard.

“What we discovered, here in Gainesville, there just wasn’t a lot of this type of housing available,” Deb said.

Then they ran into Gabe Huish, president of Huish Homes. The Maguires had hired his company to do some remodeling work in the past. When John and Deb mentioned their desire to downsize, Huish told them about his new project, The VUE at Celebration Pointe.

Planning was just beginning for the urban-living community located at Interstate-75 and southwest Archer Road within Celebration Pointe. After Huish described it to the Maguires, they were immediately sold on the idea.

The VUE is the only for-sale residential option at Celebration Pointe, offering 86 luxury townhomes with two-, three-, and four-bedroom units. Each has a private, two-car garage and an optional elevator to run up and down the three- or four-story units.

“This type of townhome community is occurring in other markets, like in Atlanta, Orlando, Miami, and in states like California and Texas,” Huish said. “This is really the first version of it to hit Gainesville.”

The first group of interested buyers became an unplanned focus group during the design phase, which began three years ago.

Early plans called for an onsite playground, but the buyers group lobbied for a dog park instead.

“It was nice to get that input,” Dyrkolbotn said.

Other outdoor amenities include a resort-style pool with a walk-in hot tub, cabana, fitness center, and natural gas fire pit. There also is easy access to the popular Archer Braid Hiking and Biking Trail.

Along with creating a luxury townhome in a prime location, developers wanted quality construction that was energy efficient. They achieved that goal in several ways.

In addition, the townhomes’ exterior walls are made of NUDURA brand Insulated Concrete Form (ICF). This is a roughly one-foot thick “concrete sandwich” made with two panels of expanded polystyrene foam with concrete poured in between.

“It’s basically the best way to build a home, but it’s cost-prohibitive in a single-family, detached house,” Huish explained. “With this architectural style, it really becomes the best answer for a high-quality way to build.

“Owners will see reduced noise, reduced energy bill, and it will be much stronger than a typical wood-frame structure.”

To further cut down on noise and energy use, the townhomes will have spray foam insulation inside and synthetic stucco on the exterior.

“Going into the design we had some pretty nice standard finishes,” Dyrkolbotn said. “We weren’t expecting so many buyers would want to customize their townhome in a more upscale way.”

One of the benefits of buying a unit before construction is completed is the ability to make some changes.

“It’s very cool what we can offer buyers,” Gabe Huish said. “They’re surprised when they come to the table and ask about doing something different, and we say we’ll get you a price on it and work with you on it.”

He said each of the first few units has something unique that the buyer requested.

The Maguires decided to buy one of the three-bedroom units with an outdoor terrace.

“We actually did quite a bit of customizing, especially in the main living area,” Deb Maguire said. “In our previous house, Gabe had remodeled our kitchen and gave us custom walnut cabinets. He’s doing that again for us here. The floor plans and what we saw in our meetings with the team made it so easy to make decisions. It’s just been a really good experience.”

While Dyrkolbotn says most are opting for the elevator, others are still on the fence.

“They want the elevator shaft built-out, so it can be added later,” she said, noting the space can be used as storage until the elevator is needed.

The VUE has six floor plans: a two-bedroom unit, two layouts of the four-bedroom unit, and three choices of the three-bedroom townhome.

The plans call for 18 buildings spread over the development with an option for a limited number of condos and single-family homes in the future.

Dyrkolbotn said buying a new townhome in the development is different than buying a home. As the real estate broker, she explains those points with potential buyers face-to-face.

“Then they talk to the build and design team about any customization,” she said.

The least expensive townhome is listed at $409,000. It is a two-bedroom, two-and-a-half-bath unit with an outdoor terrace.

While some might balk at the price, those coming from a single-family home on an average-to-large-size lot with a pool may see a savings moving into a townhome.

“One client is selling her home in Gainesville on three-quarters of an acre and she spends about $30,000 a year on various things to maintain it,” Dyrkolbotn noted. “She would save $10,000 each year by moving into The VUE, because the exterior is taken care of and she wouldn’t have a personal pool.”

A lot of Interest

By the time construction began on the first building, nearly all of the units were sold. One will be used as a model for interested buyers to tour.

“We have a list of about 80 people who are interested and have our information, but they want to see it,” Dyrkolbotn said. “They’ll be visiting the model that will be open during the Parade of Homes in April to get a better idea.”

She said the townhomes that have a fourth floor rooftop terrace option are the most in demand.

“This is a first in the market (concept), but interest has been higher than one might think,” Dyrkolbotn said.

“It’s really the first time Gainesville has seen something like this,” Huish said. “That’s why it’s kind of a neat time to be doing it, coinciding with the restaurants and stores opening at Celebration Pointe.”

It was an easy sell for the Maguires, who already sold their house. They moved into an apartment while waiting for their townhome to be ready this spring.

“When they’re done with this community, I think it’s going to be a pretty impressive development,” John Maguire said.

“It’s exciting to be in at the beginning!”
Deb added.