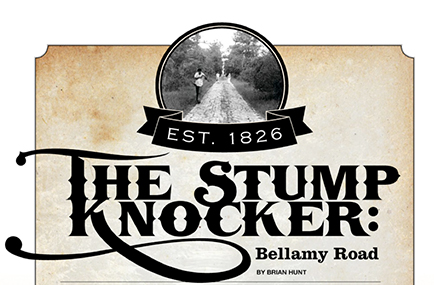 No, I’m not talking about Swamp Head Brewery’s tasty pale ale of the same name. The original “Stump Knocker” was the nickname given to Bellamy Road, the first major U.S. federal highway in Florida. The road followed an old Native American trade route that connected Franciscan missions to St. Augustine.

Shortly before Alachua County incorporated in 1824, Congress authorized the creation of a road:

“…in the territory of Florida, a public road from Pensacola to St. Augustine…on the old Spanish road to St. Augustine, crossing the St. John’s river at Picolata; which road shall be plainly and distinctly marked, and shall be the width of twenty-five feet.”

The government wanted to connect the two major cities and territorial capital in Tallahassee. The road had to be wide enough so wagons could pass each other without stopping. U.S. Army Captain Daniel Burch surveyed the route, leaving Pensacola in October 1823. His unit traveled 445 miles and arrived in St. Augustine a month later. Seeing some difficulties in the terrain, Burch decided to contract out the eastern half of the road from Tallahassee to St. Augustine.

On December 18, John Bellamy bid $13,500 to complete the road. Bellamy, sometimes spelled Bellame, was a wealthy South Carolinian who owned an 18,000-acre plantation in Monticello, Florida. It didn’t hurt his cause when territorial Governor William Duval lobbied in his favor.

Burch accepted Bellamy’s bid, and work began immediately. Native American guides and Bellamy’s slave labor constructed the 25-foot-wide road. The men dug, chopped trees and cleared thick brush. The route looped around lakes, swamps and other low-lying areas. In heavily forested sections, tree stumps were cut within one foot of the ground so that wagon axles could clear them. But, due to the number of trees and rapid pace of the work, this was impossible to do consistently. Wagon bottoms often hit a stump and knocked passengers off their seats. So, the road earned the nickname “Stump-Knocker.”

In June 1825, Captain Burch reported, “The contractor for that part of the road from Ockolockony to St. John’s is progressing well with his work and calculates to be ready to deliver it over to me by the first of December next. I have made him a payment of near $8,000 on his contract.”

Cutting a dirt road through North Florida in the summer presented numerous challenges. Bellamy’s slaves worked through difficult conditions — heat and humidity, insects and the torrential afternoon rains that turned the sandy soil into thick soup. Other than the swamps and dense hammocks, the main geographical obstacle in northwest Alachua County was crossing the Santa Fe River. But, this turned out to be no obstacle at all. Burch’s planned route followed an old trail that took advantage of the three-mile stretch where the Santa Fe River disappeared underground, today’s O’Leno State Park.

By May 1826, “Bellamy’s Road” was completed. Critics immediately attacked its construction: It was not the required 25 feet wide in some places, stumps left standing impeded traffic and bridges were flimsy.

Captain Burch, who married one of Bellamy’s daughters during the road’s construction, came to its defense: “The experience of the Southern Country shews that wide roads are not necessary; for if opened to the influences of the air & sun an almost impenetrable growth of oak brushes springs up in the first season afterwards.”

John Bellamy inspected portions of the road with Captain Burch and fixed whatever deficiencies existed. “Altho we differ in opinion,” Bellamy wrote, “I shall not hesitate, but with all convenient dispatch, to do what he [Captain Burch] considers necessary to be done.”

The road also earned positive comments. Local resident James Dell said Bellamy’s Road was “the best new road I have ever traveled.” James Symington said he rode “with more ease and comfort than any new road I ever went over.”

Three years after it was completed, however, sections of the road in Alachua County were barely used. The 45-mile Micanopy-Palatka road, cut in 1822, was preferred. A steamboat landing on the St. Johns River at Picolata revived interest in the Bellamy Road; portions were rebuilt and rerouted in 1835.

As railroads became more prevalent in the late 19th century, the Bellamy Road fell further out of use. In the early 1900s, sections became part of a tourist campaign encouraging visitors to follow “in the footsteps of padres and conquistadores.” U.S. Route 90 and later Interstate 10 cemented the Bellamy Road’s obsolete place in history.

Portions of Old Bellamy Road still exist today. In eastern Alachua County, the road follows the Old Mission Trail on the south end of Lake Santa Fe, part of State Road 26 in Melrose. Another easily accessible remnant is part of the O’Leno State Park and the overland pass of the Santa Fe River. From there, the road passes out of Alachua County toward Tallahassee.

While the stumps are long gone, Bellamy Road is one of those rare places where history overlaps the present. From Native Americans to Franciscan monks to American settlers, traveling the road today is a rare glimpse into what used to be.