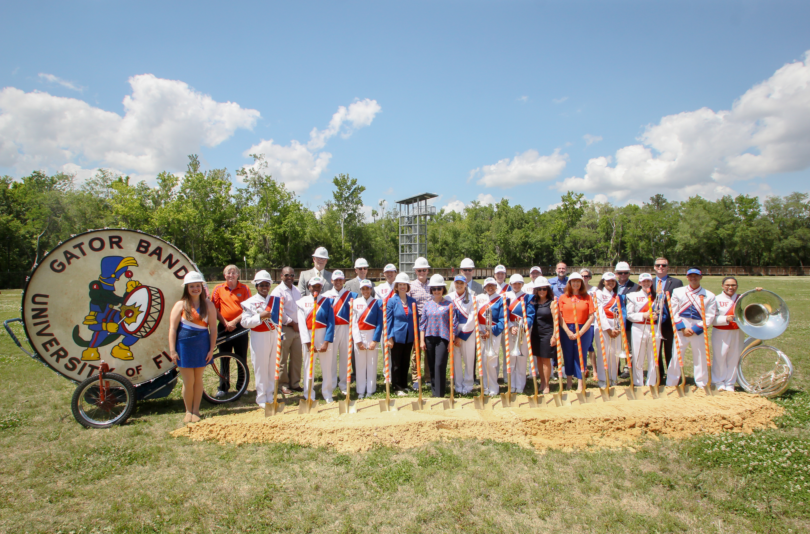 On Friday, April 11, band members and faculty stood in a row, waiting for the moment to grasp a shovel and break ground for their new practice field. Associate Director of Bands Jay Watkins stood among the smiling faces on what was formerly known as Pony Field. For 12 years, Watkins had patiently waited for this change. Watkins took on the project as soon as he accepted his role as director in 2006. Yet, longer than this, the band has been without a place to call their own.

“This project is significant because it finally creates a permanent home for the marching band on campus,” Watkins said.

“Safe,” Watkins emphasizes when referring to the NCAA-regulated artificial turf and pavilion, just a few of many upgrades that come with the new practice field. It is a drastic difference to the grounds they currently practice on at Norman Field. A level playing field, shelter from Florida’s unpredictable weather, and stadium lights accommodate the needs of band members.

For two hours, four days a week, band members arduously rehearse on the field. Their presence in the swamp, at pep rallies and even on nationally televised programs tends to overshadow the fact that marching band is still a class. Watkins said this field provides all of the facilities a UF student would normally expect for an academic class.

For third-year tuba player and section leader Ally Prince, the performance space has been much awaited.

“It’s the same as a classroom, but with people playing sports in your class,” she said.

It is a brighter future for the band now that they finally have a space to specifically accommodate their needs.

An area that mimics that of game days, the estimated $2.4 million field is expected to be finished by November 2018. And this is only the first phase. Phase two expands upon the educational value in the arts. Research and teaching buildings are part of the overhaul. As of now, the projected time and costs for phase two have yet to be determined.

Prince has experienced firsthand what the arts can do for a person. She acknowledged the support of Dan Mullen and the arts association with their investment in the band.

“It’s definitely worthwhile to keep funding the arts,” Prince said. “That’s basically what the new facility is [saying] – ‘hey, we value you, and we want to give you a space [where] you can learn and develop,’” Prince said.

Alumni, the University Athletic Association, the Office of the Provost, the School of Music and the band are largely responsible for making the state-of-the-art classroom possible. The latter hopes to reach a significant fundraising goal to push phase two along. Watkins said the band is not only a big part of the university but also the community. The community’s continuous support can help get the entire complex completed and provide students with the proper resources.

“It gives the students a greater sense of pride and recognition for all of the work they do and all of the time they spend as representatives and ambassadors for the university,” Watkins said.