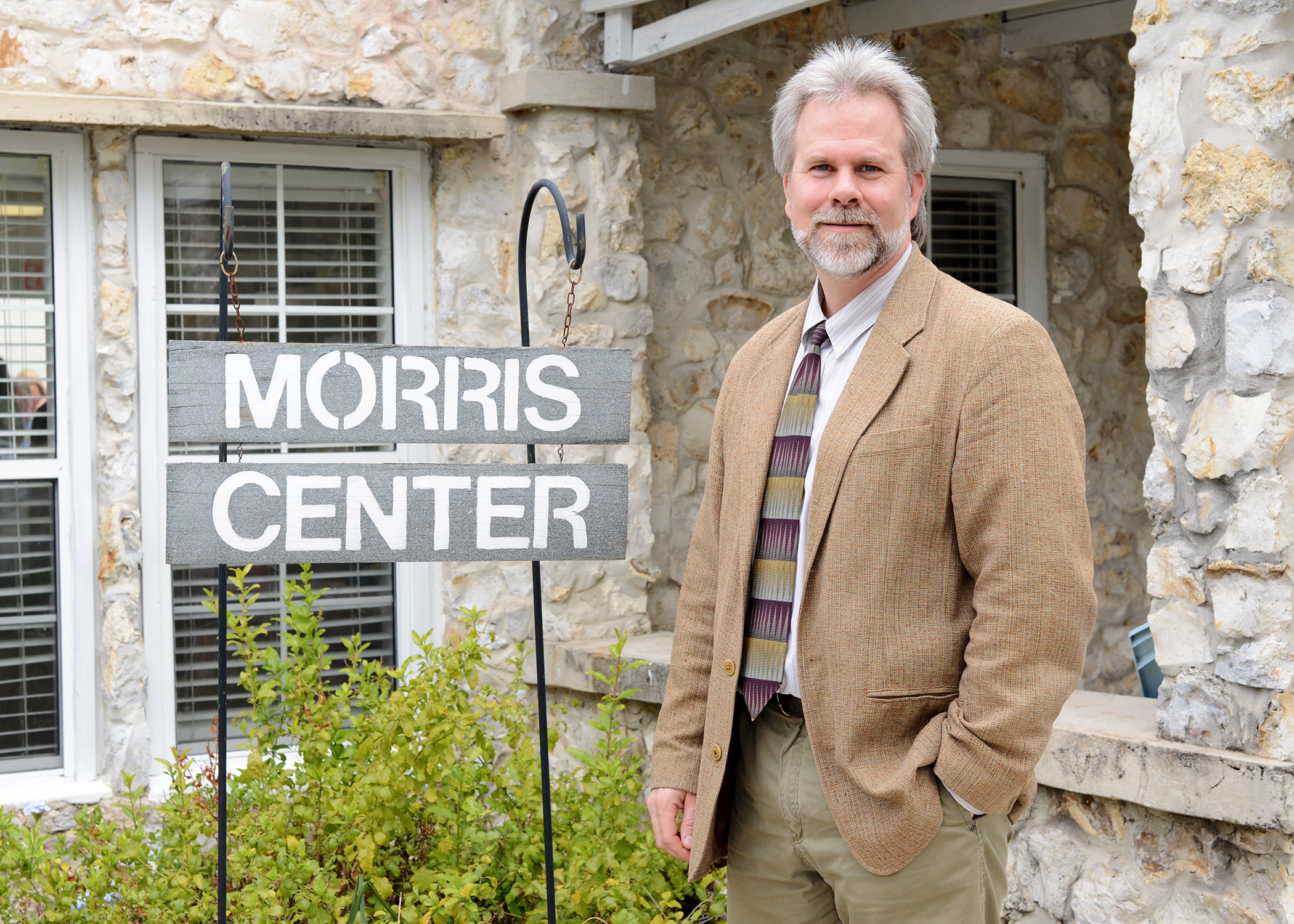 “BB-AA-BB-YY,” a mother says slowly as she smiles down at her newborn.

“HH-II,” she says even slower and starts to wave gently. The child responds with a squeal of giggles, not realizing the significant impact this will have on their life as they grow older.

Those beginning interactions become the foundation for language, Dr. Tim Conway of The Morris Center (TMC) said. By slowing down speech and prolonging it, parents are actually showing their children how sounds are made by hearing them, seeing how they’re formed with mouth movements and feeling their own mouth move. According to recent research at Florida Atlantic University, babies actually begin closely watching parents’ mouth movements as young as 10 months of age—just before they begin to speak.

This same idea is applied with TMC’s most effective treatment for dyslexia.

Developmental reading disorder (DRD), also known as dyslexia, is a “problem with identifying the separate speech sounds within a word and/or learning how letters represent those sounds, a key factor in their reading difficulties. Dyslexia is not due to either lack of intelligence or desire to learn.” It is not caused by vision problems; it’s genetic, according to the International Dyslexia Association.

“Dys” means trouble and “lex” means words. It affects language, sensory and motor skills. One out of 10 children have it, which causes it to be one of the most prevalent issues for that age group, Dr. Conway said. Signs of it can be seen as early as 2 to 3 years old. If remained untreated, a person can deal with life-long difficulties in reading, writing and speaking as well as issues with self-esteem.

TMC, located at 5930 SW Archer Rd., is a transdisciplinary team of professionals that specialize in the assessment and neurodevelopmental treatment of dyslexia and other of language, sensory-motor, attention and behavior problems.

“If you ask someone on the street what dyslexia is, they’ll tell you that people with dyslexia see words backwards,” Dr. Conway said. “That’s completely and utterly incorrect. There’s no research to support that they actually see words backwards. Unfortunately, it’s the most common myth out there.”

TMC was founded in 1986 by Dr. Ann Alexander, a developmental-behavioral pediatrician. Since then, it has treated more than 700 clients from all over the United States and even internationally. Between the Gainesville location and the second TMC clinc in Ocala that opened in 2011, it now serves clients across the globe, from Illinois to Venezuela.

“We’re a low-volume, high-quality clinic,” Dr. Conway said. Currently, it is treating about four to six people at each location, with an average stay of 9 to 16 weeks.

TMC draws patients far and wide because it is one of the few clinics of its kind in the country. It is also the only clinic in the U.S. that has helped conduct and publish research findings from three five-year studies to prove the effectiveness of its methods.

“The reason that’s so important is because there’s no licensing required to open a clinic to treat dyslexia,” Dr. Conway said. “Consequently, there are many clinics that provide services for dyslexia, but very few of them have this kind of expertise and even fewer have a scientific research base like TMC. To help offset this lack of research-based services, TMC also provides teacher training programs, both nationally and internationally. TMC has trained over 1,000 teachers through partnerships with public school districts, private schools, state funded entities like FDLRS-Springs, universities and nonprofit organizations.”

Locally, the Einstein School is a second- to eighth-grade, free, public charter school located next to TMC for students with dyslexia and other reading or language difficulties. Dr. Conway co-founded it in 1999 with a man who went through TMC’s intensive treatment program.

“If [TMC] wasn’t here, the Einstein School would not exist,” he said. “That charter school came from TMC’s work privately, as well as the three five-year research studies. It has helped improve reading skills for over 1,400 students in the last 14 years.”

Dr. Conway is the volunteer president of the nonprofit corporation that runs the Einstein School, and TMC provides free teacher training and other support to this charter school. On average, children at the Einstein School will improve their reading ability by one to one and a half grade levels in a single year of instruction—the typical gains for children with dyslexia in other schools are half that amount or less.

Dyslexia can be prevented at the age of 4 or 5, which TMC has proven through one of its collaborative research studies with Dr. Joseph Torgesen at Florida State University. TMC and the FSU team screened more than 1,500 kindergarteners from the Tallahassee school district and put 40 children, who were in the bottom 12th percentile with pre-reading skills, through TMC’s dyslexia prevention program. Ninety-eight percent achieved average reading skills by second grade, while the 80 children in the two other treatment groups and the 40 children in the control group were far less successful.

“We now know how to actually prevent dyslexia, and this information really should replace the myth that children with dyslexia see words backwards,” Dr. Conway said.

If you don’t prevent it, people with dyslexia will develop growing gaps in their reading skills that will worsen as time goes on.

“Think about a house—you’ve got to lay a solid foundation, then build a first story, second story, third story,” Dr. Conway said. “If the foundation is cracked, it doesn’t matter how good the lumber is on the first or second story, the house is always going to have problems. The real fix has to start with the foundation.”

However, dyslexia can be successfully treated at any age. TMC treats patients as young as 3 years old to those in their 70s and 80s. Thankfully, as long as you’re alive, your brain has neural plasticity or the ability to improve and learn, he said.

TMC’s most effective treatment is called the Neuro-development of Words® – Read NOW!®  program. It goes back to the basics of the awareness of sounds. For each month of treatment at TMC, the average reading improvement for patients with dyslexia is at least one grade level.

Like a newborn starting to understand their parents, patients at TMC go through an intensive treatment program that begins with matching the appropriate mouth movements to its correct sounds, then judging the number, order and various changes in a word’s sounds (phonological awareness) and eventually moves on to teaching how to sound out words for reading and spelling.

A mother who wishes to remain anonymous wrote a testimonial to TMC regarding the improvements in her high school son after the intensive treatment program. When her son first arrived, he suffered from a severe case of dyslexia. During his three-month stay, his reading ability grew at least five years. He felt confident to read out loud in class and graduated high school with an above average score on the writing portion of the test, she said. Last TMC heard, the son was doing well in his second year of junior college.

“I know all the parents say thank you and tell you what a difference all of you made in their child’s life,” she wrote in her letter. “I feel like you all saved his life!”