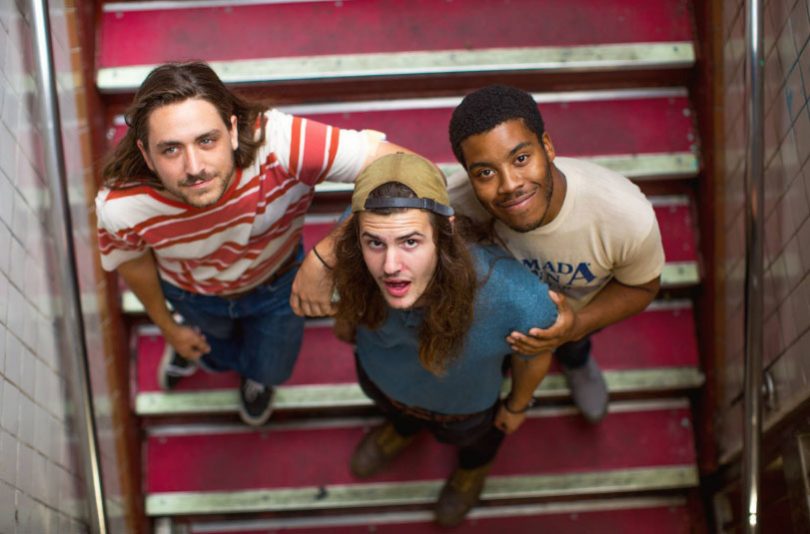 For The Lonely Biscuits, taking the leap into starting a band wasn’t even a quarter of the battle; the real struggle was finding who the members wanted to be as artists.

Grady Wenrich stares into the Gainesville crowd, and a smirk appears on his face. He gently nods his head, his hair cascading just beneath the waist pocket of his striped overalls.

A crowd member in his 20s calls out to him, complimenting his outfit choice of the night. Wenrich laughs in approval, thanks him and then proceeds to ask the crowd which song they’d like to hear first.

Unlike many bands attempting to make it to the “top,” The Lonely Biscuits haven’t prepared a set list. But it’s certainly not because the band fails to take its job seriously. After graduating from college in 2015 and supporting themselves purely on their music, they have worked to establish an authentic and individual sound.

With their casual and down-to-earth demeanor, they connect with their fans in a way that seems to be different from other musicians in the business. They not only play for their audience — they play with them.

At the High Dive on Southwest Second Avenue in Gainesville, Wenrich gives his locks a quick flip as he glances over at bassist Nick Byrd to give him the “go.” Within seconds, multicolored lights flash. Indie rock melodies fill the venue. A surge of energy pierces the crowd.

In this moment, the barrier between “musician” and “fan” does not exist. There’s just a crowd of people who are enjoying the music: some who are making it and some who are listening to it.

As they play, the band members are no longer at the High Dive on a chilly November night. They’re lost in the music; they’re somewhere else. But the crowd that watches their every move seems as though it is not far away. It sways back and forth, up and down, attempting to mimic every beat.

At some concerts, you might find yourself surrounded by still bodies and brief head bobs — or worse, excessive bouts of Snapchatting. Not at this concert.

Here, everyone is moving, even the bartender in the back can’t resist the tug of the melodies that have entranced the crowd. They might not all be on beat, but they’re all moving, whether they are dancing, jumping or awkwardly flailing their arms in every direction. And with beer spilling on the wooden floors, it’s safe to say the atmosphere is anything but dull. 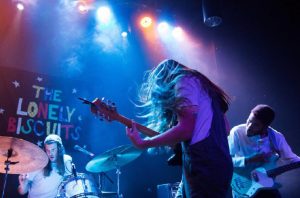 Drummer Sam Gidley can attest that good energy is one thing they’ve always maintained throughout the past five years. Connecting with their fans has never really been an issue for them; the problem arose within the band itself.

Sometimes, “growing pains” come along when creating a band, especially as college freshmen. In fact, it seems as though taking the leap into actually starting a band isn’t even a quarter of the battle; the real struggle lies within who the members want to be as artists, what music they want to create and how they want others to feel when they listen to it.

“The biggest thing is being personal with our fans,” Wenrich said.

But as 18-year-olds, The Lonely Biscuits bandmates could only take inspiration from what they knew or what they had been listening to. They toyed with hip-hop, which was fun and fit the college demographic. But, they eventually outgrew it, realizing that it wasn’t something they’d be proud to look back on in the future. Their music was catchy, goofy and lighthearted, but it lacked potential, or at least the potential that the band saw for itself.

“College was our experimental phase with different genres,” Wenrich said.

As they reached graduation, they decided their music was more than just a “phase;” it was a career.

That was when everything really changed, Wenrich said. They started fresh. They fired their managers and fell into a completely different style of music.

They still pull inspiration from their favorite bands, which include Kings of Leon and Weezer, but the majority of their sound is fueled by daily interactions. A whole song might be influenced by just one feeling.

“Something just sparks inspiration, and ideas go from there,” Wenrich said. “That’s usually how our best songs are created.”

And while the band may have had its setbacks, its momentum is only getting stronger. The group released their first album at the end of 2016 and will continue touring the U.S. in 2017.

“We’re making music that we feel like we’ll be proud to look back at when we’re older,” Wenrich said.

Gidley laughed, “We hope so, at least.”