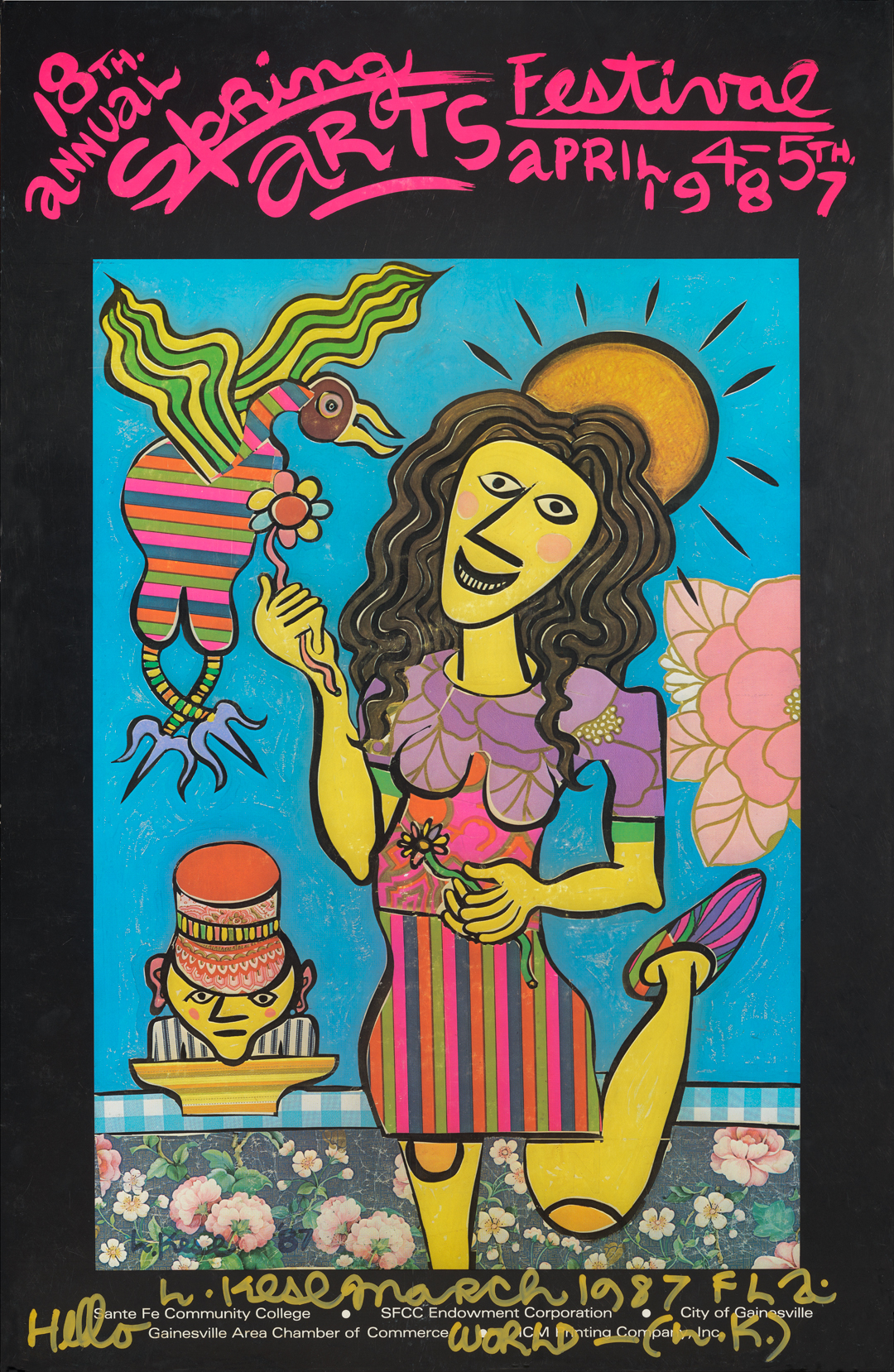 It is not often that the death of an 86-year-old person is deemed “unexpected.” And yet it was the only way to describe the passing last fall of artist Lennie Kesl, a fixture in Gainesville’s art and jazz circles for decades.

“He probably had the most energy I’ve seen anyone have,” said Hector Puig, owner of héctor Framing & Gallery, a dealer/collector of Kesl’s art and a personal friend to him for more than 20 years. “We were all shocked by the fact that he left us so early, even though he lived a full life of 86 years. I told him that he would outlive me and he would be upset with me for telling him that. His joy for life was unparalleled. I’ve never seen anything like it.”

Kesl passed away on Nov. 24 after a fall down the stairs of his Gainesville home. A retired art professor at both the University of Florida and Santa Fe College, Kesl was well known in the community for his work in oil, acrylic, collage, wood sculpture and many other mediums. He often collaborated with other artists, including potter John Tilton, and his works have been exhibited in museums all over the country, from New York to Alaska.

Vibrant colors and playful, eccentric images are hallmarks of Kesl’s art—which can be appreciated by aficionados and novices alike. For the third time, his work will be featured on the Spring Arts Festival poster. It is the only art featured on the event’s poster to ever be reprinted.

However, Kesl was known for far more than his art. An avid fan of jazz music, he was an enthusiastic drummer and singer who often performed with local musicians and recorded three albums. He was also a charter member of the Gainesville Friends of Jazz.

Kesl had a vast knowledge of art, music and other topics – and a memory just as expansive, according to Dan Steppe, a professor of art at Santa Fe College and friend of Kesl’s for more than 15 years.

“Lennie knew everything about every painter you wanted to know about. He was a walking encyclopedia,” Steppe said. “And he had such a great memory. One time I was talking to him about a painter named Augustus John. Two years later he shows up with some book on Augustus John and said, ‘You remember we talked about that?’ He would remember everything.”

According to his obituary, Lennie Kesl was born in Illinois on June 12, 1926. He enlisted in the U.S. Army at age 17 and served during World War II in the African and European theaters before becoming a drummer in the Army band. After his military service was complete, he earned his B.F.A. from Wesleyan University and his M.A. from Michigan State University. He also studied at L’Atelier Fernand Lager in Paris and the University of Colorado at Boulder. He married his first wife, Ella Jones, and had two children, James and Diana.

Kesl was an art professor at several schools before coming to Gainesville in 1968 to teach at UF and SFC. He married his second wife, Nancy Mitchell Kesl, in 1986 and they had a daughter, Charlotte. He retired from teaching in 1991 but continued creating art and performing with fellow musicians right up until his death in November.

His generous spirit touched many people in the area; Steppe explained that Kesl helped him get connected with the art community when he returned to Gainesville from New York, while Puig credits him with teaching him how to see art.

“He had the best eye that I’ve ever seen,” Puig said. “Whatever work it was, he would dissect it in five minutes and tell you the positive attributes to it and the negative ones, and how it could improve.”

But as analytical and knowledgeable as he was, Kesl is perhaps best remembered for his irrepressible spirit.

“The guy loved life and he would be at all kinds of events, whether they were music or art events,” Steppe said. “He certainly didn’t get old in the conventional sense. He stayed young and active and was always involved in the community and the arts.

“He was the kind of guy anyone would like to meet.”

A tribute to honor the life and works of Lennie Kesl

*Reprints of the previous two Spring Arts Festival posters featuring Kesl’s work will be available for purchase and can also be ordered online at www.springartsfestival.com.