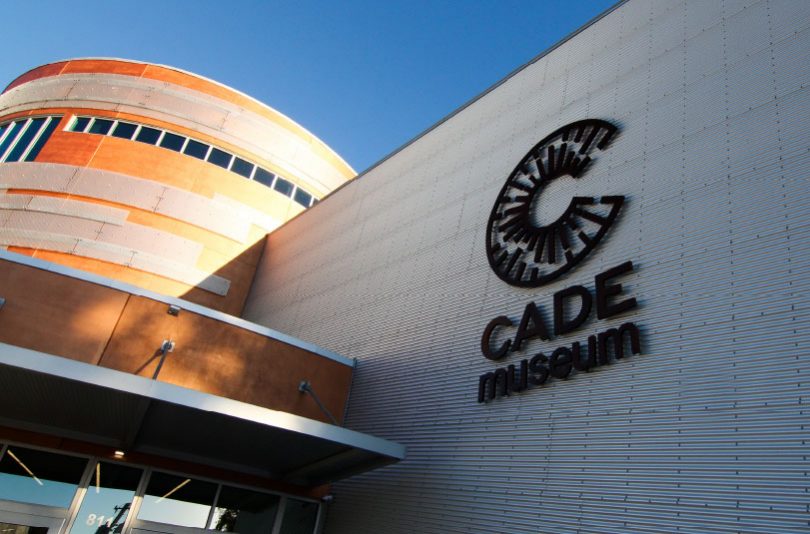 Imagine a community thriving off a meeting place that spreads ideas, inspires imagination and ignites creativity. Gainesville now welcomes a new local museum that defies the typical definitions of exhibits and education to do just that. The Cade Museum for Creativity and Innovation opened its doors to the public in May, and serves as a new local hub for creativity, invention and innovation.

Executive Director Stephanie Bailes put the museum’s mission statement simply: “To transform communities through inspiring and equipping future inventors, entrepreneurs and visionaries.” The museum strives to bring the huge global movements of the modern world and rapid innovations in technology into its building, where the average person can understand them enough to potentially factor them into their daily lives. So not only does Cade strive to prepare people for the technological advances of the future, but it also equips future inventors, scientists and artists with tools that are a prerequisite for a life of innovation and invention.

“This is not just a museum,” Bailes said. “We hope to bring together a community [and] provide a legacy for our city and for our children. We need this to be just as much about the people that come into the building as it is about the institution itself.”

So how does a single museum provide the foundation for so much innovation and inspiration? The Cade Museum hosts a central motif that decides the current exhibits and activities it offers. The motif changes about every six to nine months.

The central motif is showcased in the rotunda, or center of the museum. There, professionals give presentations on their topic and what they’ve developed. This professional is either an inventor, an entrepreneur or a creator. Cade strives to provide a new professional every weekend, including many experts from UF, UCF and the Northeast.

“You will see a very diverse population of talent and experience,” Bailes said.

From now through September, Cade is hosting the Brain Motif featuring slide images  and five virtual reality videos looking into the brain. After September, the museum plans on hosting an architecture motif. The building’s architecture will serve as a firsthand example.

The museum is constructed to replicate the Fibonacci Sequence and the nautilus shell. The Fibonacci Sequence is the series of numbers found in art, architecture, philosophy and nature. The sequence can be seen in the shapes of spiral galaxies and in the way sunflower seeds grow. It defines the ratio of our fingers and things that we naturally find beautiful.

The architects of the museum used the sequence to inform the size of the windows, the width of the stairs and the windows at the top of the rotunda (some are 3 feet tall; others are 8 feet tall). The scale of the entire building is constructed from the Fibonacci Sequence, down to the museum’s number of parking spots. There is even a path winding around the outside of the museum that is an extension of the spiral design. The entire place is an homage to nature and the nautilus shell.

The museum also plans on keeping one of its two labs open while visitors explore. For an additional charge, people can visit either the Creativity Lab or the Fab Lab, which has 3-D printers and tiny robots made easily programmable for the public to code. These labs will provide additional activities for the public to gain hands-on experience with the motif presented.

“Technology is evolving so rapidly now, that we’re not just talking about having a leg up when they [local children] go to college, we’re talking about having a leg up on an operating level in society,” Bailes said. “As an example, 3-D printing is growing so rapidly and becoming so powerful, we need to understand how to use that technology because it’s the manufacturing of the future.”

The museum also plans on hosting the Imagination Questionnaire, an opportunity for people to participate in a process that helps prompt the development of their imagination through a series of questions. The participant begins the quest at the museum and answers the questions over a span of 12 to 28 days. Each question takes only three to eight minutes and is meant to ignite a spark to help individuals realize their own creativity.

“We’re about that creative piece, that curious piece, that inventive peace that ends up manifesting itself in one of those places,” Bailes said.

The museum will also feature a permanent exhibit called The Sweat Solution. This exhibit will detail the global impact of Gatorade, the popular sports drink invented by Robert Cade at The University of Florida in 1965. The exhibit will explain Gatorade’s history and emphasize its global impact, such as preventing death from dehydration in third world countries.

For this summer, the Cade Museum hosts week-long summer camps. Five week-long camps are held in partnership with the Gainesville Dev Academy and one week-long session is a Cade exclusive camp: Short Film Production 101. Camps in partnership with the Dev Academy will offer activities to introduce children to coding, web design, painting, kite building and film production. The museum also offers scholarships to those eligible, to ensure every child has the opportunity to embark upon these endeavors.

The museum is open from Tuesday-Sunday, with admission starting at $12.50 for adults and $7.50 for kids. Cade Museum works with Museums for All, a program for SNAP EBT cardholders (people who receive food assistance from the government) that reduces the fee of entry to $3 for adults and free entry for those under 17 years of age. This way, Cade welcomes individuals who otherwise may not be able to enter the museum. The museum will also offer membership packages.

Bailes explained that the museum aspires to serve the community by offering lectures, exhibits and hands-on experience with technology to educate the public and stay up-to-date with technological advances.

“There are a lot of kids that are smart kids, and they may not be in a magnet program, they may not be in a private school, they may not have access to things like 3-D printers and the coding platforms you could use for 3-D printing, and it’s all out there,” Bailes said. “They just either haven’t used it because they don’t know about it or they don’t have the facilities or the tools to access it. And again, that’s what we’re here for.”