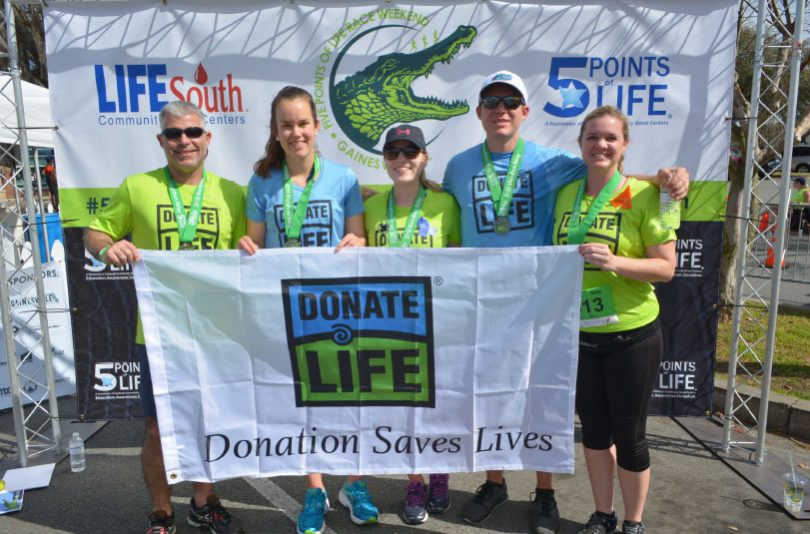 The 17-year-old high school senior had lived a healthy, active life – until her heart began to fail. Christina was admitted to Shands Teaching Hospital and wasn’t expected to live through the week, unless she received a new heart.

In February, Christina ran a marathon relay race – all because of a generous organ donor.

She and many others came to Gainesville to participate in the Five Points of Life Weekend. Founded in 2006, this yearly event includes the Kids Marathon, 5 Points 5K, Marathon Relay, Half and Full Marathon. All proceeds benefit the Five Points of Life Foundation, which educates and raises awareness of the five ways to share life with others through the donation of blood, apheresis, marrow, cord blood, organ and tissue.

Christina can personally attest to the magnitude of this very special gift.

“Honestly, I am just so grateful for this second chance at life,” she said. “I was always really healthy and really active, and I danced and did water sports and all kinds of things, so you can imagine the shock of being 17 years old and being as ill as I was, and then being told that I needed a heart transplant to survive.”

Christina said her immediate instinct was to pull through this life-threatening situation by complying with her prescribed treatment and medications.

“And then it became OK. I have this amazing second chance and opportunity and I chose to completely embrace that,” she said. “I’m good to my heart and my heart is good to me. This is going to be a tremendous journey.”

She said that she felt better immediately after the procedure.

“Although I was heavily medicated, it was from that first moment that I woke up and I could breathe and I didn’t feel like I was underwater anymore,” she said. “I got my heart in August 2003, and I was a dancer, so by October, I was dancing.”

Christina said she is also thankful for her “amazing support system.”

“And I have my faith, which has really helped me through every moment of every day,” she said. 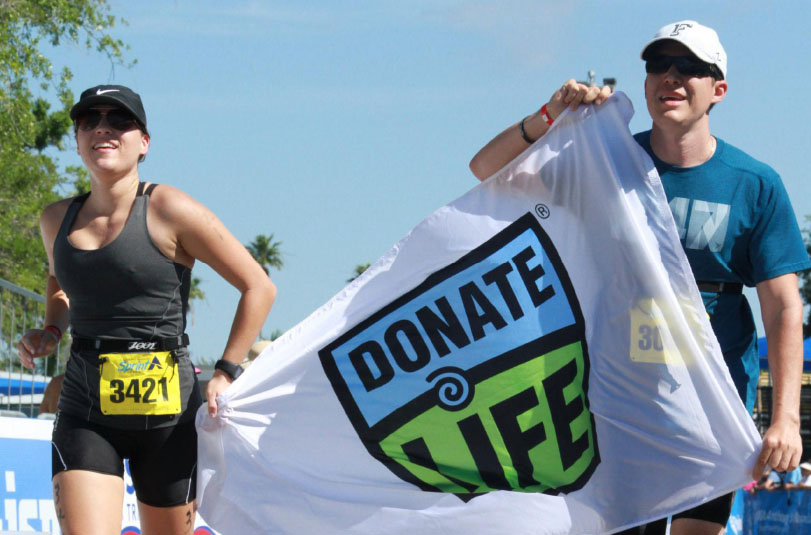 Becky Raulerson also ran in the relay race that day, although she is not an organ recipient – she is a donor. Three years ago, Becky donated a kidney to her childhood friend, Candi Hinson.

“I’ve always been listed as an organ donor, but I never thought about being a living organ donor until my best friend needed a kidney.” Becky said. “And then I never had any doubts about doing it.”

Becky’s husband was a match, but tests revealed that he had kidney stones.

“So it fell back on me,” Becky said. “And I was not surprised at all. I said [to Becky], ‘I told you I was going to be your match!’ And right before the surgery, the nephrologist talked to us and said, ‘We never had two people who were not biological sisters that were as close a match as you are.’”

Regarding the decision to donate her kidney, there was never any other option in Becky’s mind.

“God called me,” she said. “I have a very strong faith, and my relationship with God, and I just felt He said, ‘You’re going to do this.’”

As for the surgical procedure, Becky said her family members were more worried than she was.

“It’s life changing, but it’s not life changing,” she said. “I have to increase my water intake, but otherwise I don’t even realize I don’t have it. Statistics all show that somebody who has donated a kidney usually is healthier than somebody who hasn’t, because they know they have to take care of their other kidney.”

Becky now volunteers with LifeQuest, speaking about the importance of being an organ donor and sharing her story with high school students.

As for her thoughts on donating her kidney?

“I’m very appreciative for the opportunity,” she said. “I tell her [Candi] all the time, that this experience saved my life as much as it saved yours, because it just gave me this new perspective on life that I didn’t have before.” 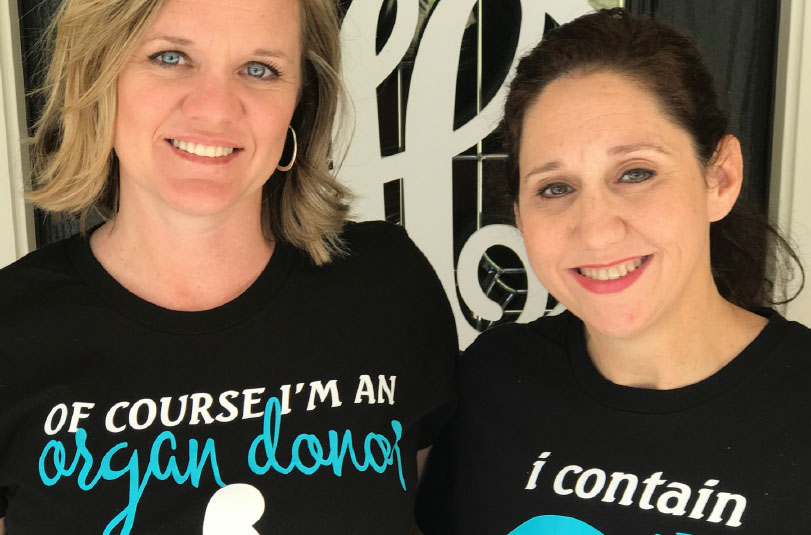 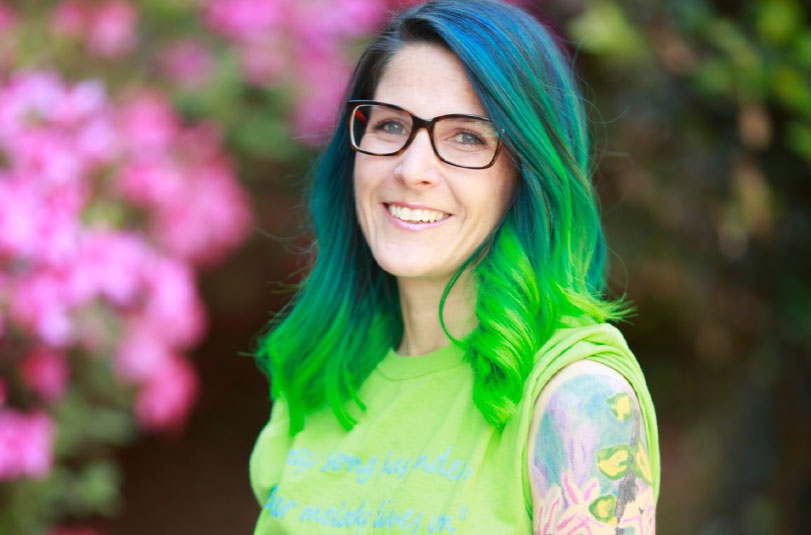 Jennifer Wilson has tattooed her arm with her daughter’s artwork and colors her hair in LifeQuest colors in recognition of the importance of organ donation.

Jennifer Wilson’s daughter, Holly, lost her life five years ago in a tragic car accident. She was 4 years old. But several people are alive today because Jennifer and her ex-husband agreed to donate Holly’s organs.

In memory of her daughter and in recognition of the importance of organ donation, Jennifer began dyeing her hair in the LifeQuest colors, blue fading to green. Additionally, her left arm is adorned with tattoos depicting Holly’s art.

“I have a full sleeve of her artwork,” Jennifer said. “Four different paintings from the

She does this to not only honor her daughter’s memory, but to also serve as a conversation-starter about the importance of organ donation.

“When people stop me and tell me they like my tattoos, aside from my hair, that’s my other way of bringing up organ donation,” she said.

Her family had never talked about organ donation, so it wasn’t until she was faced with the tragic reality that her daughter was not going to survive that she made the decision to help others.

“All I could think about was being able to keep someone else from feeling the way that I was feeling at that moment,” she said. “If I could help another family from experiencing that moment that I just had, then why wouldn’t I?”

“We have corresponded with the family of the little boy who got her heart,” Jennifer said. “I hope to one day meet him and actually get to listen to her heart keeping someone else alive. It’s pretty amazing to think about.”

Jennifer said she knows that the situation can be overwhelming for the young man, so she will wait until he is ready before arranging a meeting.

She’s learned from the family that the young man had spent most of the first four years of his life in the hospital.

“When he came home for the first time, he was able to go trick-or-treating, and be home for Christmas, and he was able to actually go outside and play,” Jennifer said. “They say he just sat down on the ground and touched each blade of grass. He’d never been able to do that before.”

The numbers are alarming. Each day, 20 people die waiting on an organ transplant. Currently, there are approximately 115,000 men, women and children awaiting transplants, according to unos.org.

Coral Denton would like to see those numbers drop.

Coral is the public education coordinator for LifeQuest Organ Recovery Services, which covers 36 counties, ranging from Jacksonville to south of Ocala in Citrus County and all the way through Tallahassee to Pensacola. For nearly four years she has dedicated her time to educate both the community and high school students about the importance of organ donation – spreading the word and dispelling the myths.

“In those four years I’ve spoken to over 40,000 high-schoolers,” Coral said. “Overall, they are very receptive. The ones I’m talking to are very interested in making an impact, and how to leave a legacy.”

LifeQuest is one of four organ procurement organizations in Florida; the others include LifeLink in Tampa, TransLife in Orlando and Alliance Organ Recovery Agency in Miami.

“We really focus on educating the community,” she said. “We specifically like to educate high school students so they are informed about making that choice when getting their license.”

A large part of educating the public is dispelling myths about

“One of the main myths is, ‘I heard they won’t try to save my life if I’m registered as a donor,’” she said.

In the state of Florida, a person has to be pronounced brain dead by two doctors in order to be a donor; only 3 in 1,000 people die in a way that allows for organ donation.

Additionally, Florida is a single-authorization state, so if someone is registered and they are 18 or older, it is their decision to be a donor. For those under 18, however, their parents or closest family member have to provide consent.

Coral urges people to make their wishes known to their family members.

“A huge hurdle that we have is that people do not talk about this cause,” she said. “But if people at least have that conversation, it makes decisions a lot easier for the family members if something terrible were to happen.”

For those who wish to donate their organs, registering has never been easier, even if they didn’t register when they got their driver’s license.

“We really encourage people to register,” she said. “They can go to donatelifeflorida.org and register online. They do not have to replace

Furthermore, people can specify which organs they wish to donate at the website.

Coral also wants people to know that age is not a factor when it comes to becoming a donor.

“The oldest donor in the U.S. was nine days shy of his 93rd birthday,” she said. “The oldest cornea donor was 107, from Scotland.”

Many people may not realize a tissue donor can enhance the lives of more than 75 people. Furthermore, there’s no reason donors – including tissue donors – cannot have an open casket.

On a hot February Sunday, Coral ran with Becky and Christina in the Five Points of Life marathon relay.

“Everyone had a really wonderful time. It was definitely challenging,” Coral said. “This event brought awareness to our cause since we had different aspects of donation and transplantation on our Donate Life team.”

All three women have stories to share and a mission to spread the word about the importance of organ donation.

Christina can again run, dance and compete. She can live.

“Carrying my donor’s legacy has been the absolute greatest privilege, and with every day and opportunity, whether it’s a race or academically, I just hope I make my donor and my donor family proud,” Christina said. “That is the greatest way to show my appreciation.”

Becky is ever-grateful for the experience.

“It’s all a blessing. Candi and I see each other once a month, and talk or text every day,” she said. “We truly believe it was divine. That was the reason we have been friends all of these years – God knew this was going to happen long before we did.”

Jennifer would like everyone to remember that although someone’s life has come to an end, many others could benefit from their gift of life.

“You’re gone,” she said. “Why not let someone else have a few years to live their life, to correct wrongs, to love their family, or to spend some time with their kids? Everybody’s story is different, and no one should be limited, but if yours has ended there’s no reason not to give someone else a chance for a little longer.”

– Celebrity or financial status are not factors in getting a transplant.

– Donation is possible with many medical conditions.

– All major religions approve of organ and tissue donation.

– A national computer system and strict standards are in place to ensure ethical and fair distribution of organs.

– A healthy person can become a living donor by donating a kidney, or a part of the liver, lung, intestine, blood or bone marrow.

– Every 10 minutes another person is added to the waiting list.

– One donor can save eight lives.