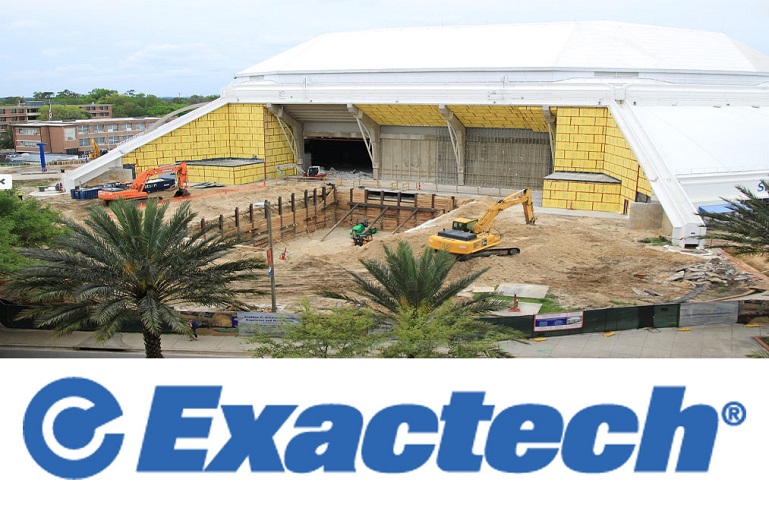 Exactech and the Florida Gators announced a new partnership Friday (June 10) with the joint announcement of the naming of Exactech Arena at the remodeled Stephen C. O’Connell Center.

The move dramatically increases the exposure of Exactech, a company that Gator grads Dr. Bill and Betty Petty, and Dr. Gary Miller founded in 1985 that manufactures joint implants and provides related products and training.

Employees cheered as Albert and Alberta joined Dr. and Mrs. Petty along with CEO David Petty and Mike Hill, the Gator’s executive assistant athletic director, in making the announcement at the company’s sprawling headquarters in north Gainesville.

“This is a nice vehicle to let the world know why we’re here for patients – to help them maintain their activity and independence,” David Petty said.

The University Athletic Association wanted a donor for naming rights that shared its core values, Hill said. “When we sat down to talk, we knew we were in the right room with right people,” he said.

Through a 10-year agreement, Exactech will pay $5.9 million, with an option to extend for five years.

This investment carries great value with it, Petty said. In addition to the name being associated with athletic events at the Exactech Arena, Fox Sports will air commercials featuring the company.

Reaching patients is important to Exactech, and so is increasing visibility in the Greater Gainesville area, Petty said.

A company survey of local people showed that 58 percent didn’t know the company existed and 38 percent had a vague notion about what it was, he said.

One benefit of the increased exposure will be in recruiting new employees for its work force, which is 700 globally, with about 500 local, Petty said.

Among the employees is Aurymar Rodriguez, the company’s internal auditor, who starred on the Gator volleyball team from 1994 through 1997. She was all smiles as she greeted Hill, saying, “This is a great place to work, and I’m excited about this announcement.”