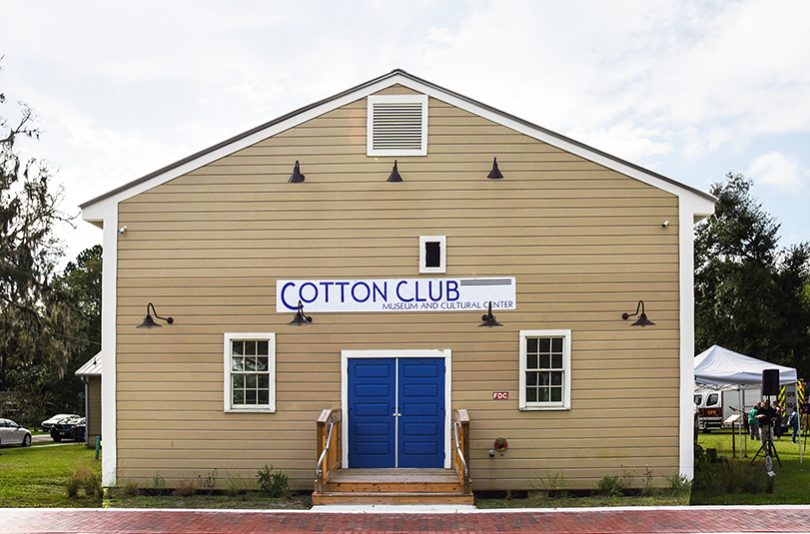 This historic venue for African-American entertainers has reopened as a Museum and Cultural Center.

It wasn’t so long ago that Vivian Filer was a child, living across the street from Gainesville’s Cotton Club on Southeast 7th Avenue. As part of the Chitlin Circuit, a collection of dive bars and shanty shacks strung across the country where black musicians made their name and sought their fame, the Cotton Club was a necessary stop for performers such as B.B. King and Bo Diddley and the king of them all, James Brown. Brown came to Gainesville in the late 1950s and performed his first hit, “Please, Please, Please,” along with his soon-to-be-legendary cape routine, in which he sweated, and moaned, and dropped to his knees, and waited for his emcee Danny Ray to drape a cape over his shoulders, only to spring up again, overcome with passion, and continue singing.

For Filer, the club was a forbidden place of mystery and wonder. Those were the days when a mother’s word, or a father’s refusal, came down like a commandment etched in stone.

“During that time, if your parents said you don’t do this, you didn’t do it,” Filer said.

Though her parents protected her from the dangers of the late-night juke joint, they couldn’t stop the place from sticking in her mind. Perhaps naturally, when her church bought the property and formed a board of directors in 1997, she joined it, becoming president and working tirelessly for two decades to have the old building restored and opened as a museum.

Now her work has paid off.

In November 2018, the newly restored Cotton Club Museum and Cultural Center held a ribbon cutting ceremony, and on February 2 – the beginning of Black History Month – the club will hold a grand opening ceremony.

“I never gave up hope it was going to happen,” Filer said.

To call the restoration Filer’s work is to tell half the story. Filer has been, and remains, the spiritual stimulus behind the Cotton Club’s renaissance, but the actual construction was funded by several state and local agencies and spearheaded by Dr. Charles Kibert, professor at the University of Florida’s Rinker School of Construction Management. For Kibert, the project was a long, painstaking process of applying for grants, working until the money ran out, and then waiting for other grants to come through before resuming construction. The building was in such poor shape, the construction team had to do more than just restore it; in essence, they had to reconstruct it.

“There was a tree growing through it, and the roof was rotting,” Kibert said. “The first thing we did was to restore the building structure, put reinforced concrete foundations in, then we replaced the roof, doors, windows and siding. The shell was now intact. There were no bathrooms in the original building, so we had to build another building, too. So, the first phase was to stabilize it and build a bathroom.”

Phase two was another grant from two different agencies – the Department of Historic Preservation and Department of Cultural Affairs.

“We used that money to finish the interior and put new flooring in. We built the stage, dry-walled it, and painted it. We did something as close as we could to the original with the resources we had. The building is unbelievably strong now.”

Today the restored club has the aura of a cathedral. Standing on the new wood floor, gazing up at the golden chandeliers dangling from the ceiling, one can feel the ghosts of the artists and patrons who reveled in that exact spot 70 years ago. There is something heavy and holy about it – heavy because of the memory of segregation, still palpable even to someone born long after the evil institution’s demise, and holy because of the memory of music, joyfully made in the face of injustice.

As Kibert walked through the Cotton Club one afternoon, proudly showing it off, his emotional connection to the building was clear. He has been with the project from the beginning, and he plans on seeing it through its final stages – restoring an original shotgun shack and an old grocery store on the property.

“I cannot say enough about Charles,” Filer said. “He is a man of a big heart. He stuck with us. I think people were telling him, ‘Charles, you need to give that up.’ But he never indicated he would leave us out to dry. He was always there, and I know it couldn’t have been easy for him.”

For Kibert, the Cotton Club project was a chance to give back to the community, which is a responsibility he feels keenly.

“We try to do a lot of community service,” he said of the Rinker school. “In fact we require it of our students.”

For Filer, the project represents something deeper: a personal crusade to fight time’s awesome power to erase history.

“I am into saving history,” she said. “I just hate the fact that, if a building is a little bit old, we tear it down without caring what it means to the community, and our children will know nothing about it. We won’t even recognize Gainesville. They’re taking the landmarks away.”

This is especially true of Gainesville’s traditionally black neighborhoods – the ones formed during the days of segregation, which are now undergoing gentrification. For Filer, it makes the Cotton Club’s restoration all the more important.

“I’m a segregation person,” she said. “I was an adult, married 10 years, before Santa Fe College integrated. I don’t have to read the history; I am the history. But I hope this building will help my age group to not let what we know die, and to pass it on to others.”

“It’s for everyone,” she said.

The Cotton Club has partnered with other museums in Gainesville, including the Cade and the Harn museums, and Filer hopes to bring in world-class exhibits, including something on the Harlem Renaissance (the Cotton Club was named after the famous jazz club in Harlem, a whites-only establishment that featured the likes of Louis Armstrong, Duke Ellington, Fletcher Henderson and Billie Holiday, in the 1920s and ‘30s).

At 80 years old, Filer is most concerned with her generation’s legacy, and she hopes the Cotton Club will be the venue to pass it on to the future.

“It gives me a new sense of being in terms of knowing that we have saved something that others may learn something for years to come,” she said. “Whenever there is a legacy to be left, that’s the only thing that’s important, that you have left something that others can learn from. History belongs to all of us. We can’t fix it, but we have to know it because it’s our springboard to move forward, and if we don’t have that, we can’t teach the younger people. A lot of people who are not African-American don’t know the story. I’m saying, ‘You need to know, and you need to have a way to find out.’ I’m trying to supply the way to find out; I think it’s my obligation.”

Then, she added, “It’s your obligation to want to know.”