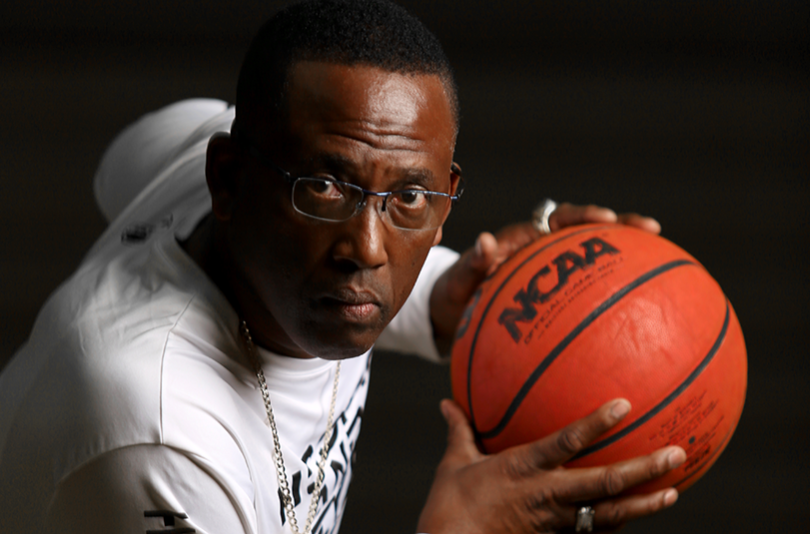 His coaching career may have had an inauspicious beginning, but 23 years later, with over 500 wins, Herman “Pop” Williams has reached new heights in the world of high school basketball in Florida.

Williams is the men’s head varsity coach for Eastside High School. After beating the Newberry Panthers 60-38 on Feb. 7, the coach has continued to focus on what is important to him – his team and the wellbeing of his students.

As a graduate of Eastside in 1981, Williams attended Santa Fe College, but left early to begin his coaching career. He started coaching at the Boys’ Club and then moved on to junior varsity at Eastside High School until he was asked to coach men’s varsity. He said he has coached approximately 310 students during his time at Eastside.

While investing his time and energy into this neighborhood and community, such as with his youth basketball camps, his coaching has motivated students to excel in basketball and academics, he said. He owes his success to the hundreds of students that helped get him there.

“To me that was a big achievement,” Williams said. “I received something at Eastside that no other coach did.”

Although Herman lost his first 10 games as a coach, he turned it around to lead his team to victory in the district championship. Out of the 23 years Williams has been coaching, his team has been in the playoffs 19 times.

Through the course of his career, Williams has learned to deal with parents, intense emotions and how to help his students put their education first.

Williams said that the toughest thing about coaching high school basketball is trying to help parents understand that not every student can make it to the NBA. Some parents are very involved and want their child to excel in basketball, but Williams tries to focus more on helping the students concentrate on their schoolwork.

All of his students have a curfew and they have to go to study hall. If they have pressing assignments or homework, they are allowed to miss practice.

While many coaches might not let team members play if they skip practice, Williams isn’t that kind of coach, he said. In college basketball, the requirements for team members are very strict, so Williams allows his team time off for family events to give them an opportunity to enjoy these moments before they head off to college.

He usually phones his students most nights to make sure they are at home, but he also calls to give them a chance to talk about anything they are dealing with.

After practice, Williams spends about 20 minutes speaking to the team and discussing what is happening in their lives. He aims to get these students ready for their next steps in life, he said.

“My kids always come up to me at games and want to be around me at the games; I go to football games,” Williams said. “They like being around me. I take basketball seriously, but we talk about a lot of different things.”

During the game in which Williams reached 500 wins, he saw about 25 of his former students cheering him on. He said that some of the former team members stick around Gainesville after graduating and end up coaching basketball.

“It makes me feel good as a coach to know that I got through to them in some sort of way,” he said.