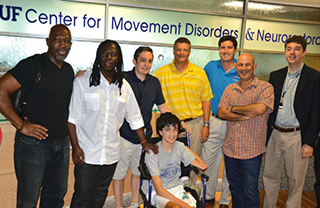 As Taste of Gainesville approaches its sixth year, we take a look at the impact the event has had on the benefitting charities.

Taste of Gainesville has found the sweet spot in the Venn diagram of things everyone can agree on. After all, it’s hard to argue against an event that combines the best food in town with charities that help children in need.

For the past five years, Taste has brought together restaurants in Gainesville to raise money for three nonprofit charities. As of 2014, the benefitting charities are: the Child Advocacy Center, PACE Center for Girls Alachua and Tyler’s Hope for a Dystonia Cure. The festivities include a silent auction and an Iron Chef competition, which includes celebrity judges. The sixth annual event will take place May 10.

Sherry Kitchens, president and CEO of Child Advocacy Center (and occasional counselor, handyman, janitor and anything else the job might require at the moment), believes that without Taste, the CAC would struggle to operate.

Kitchens said that last year’s donation allowed her staff to focus on helping the children rather than constantly worrying about raising funds.

“Last year, the donation from Taste made all the difference between worrying about making it through the next couple of months and being able to continue operating,” she said. “Taste really is that stopgap that helps us get from the first half of the year to the second half without struggling like we used to.”

“From last year, (Taste) really helped us support our program with operational costs and making sure we have the tools to serve the girls successfully,” she said. “This year, we’re looking to build a multipurpose room so the girls can have a place to do activities, eat and do performances.”

Scott Costello, executive director of Taste of Gainesville, explained how the funds raised from Taste are allocated: “There are so many good causes and good events in this community. With so many, donations are tied to a specific action. Day-to-day operations are often overlooked because it doesn’t have the sizzle of starting a new program, but it allows the organizations to use the funds as they need them most. We are proud to help make a difference in the community.”

Both Bannister and Kitchens are quick to mention that the impact of Taste goes beyond money.

“One of the big things it helps us do is raise awareness with what we do for PACE,” Bannister said. “We are an alternative school and a social services center all in one. Girls come to us at a critical point in their lives where they are flunking out of school or maybe suffering from depression. Taste helps us reach a much bigger audience than we could reach ourselves.”

Kitchens added, “There have been many intangible benefits for the Child Advocacy Center. A lot of that has to do with advertising, getting the word out and teaching the community what we do. It’s given some real visibility.”

Visibility is especially helpful for Tyler’s Hope, said president Rick Staab. The charity funds research to find a cure for dystonia, a neurological movement disorder that causes involuntary muscle contractions that force certain parts of the body into abnormal and sometimes painful movements or postures.

Since it is a rare disease, dystonia doesn’t get much media coverage, and the doctors and scientists who research it often have few outlets to share their work with each other.

“All of our dollars go toward research, and because of things like the donation last year and knowing we were going to be a part again this year, we were able to fund a research project that we think will find the cure,” Staab said.

“Groups like Taste are going to get us to the cure,” he added. “Over the years that we’ve partnered with Taste, the impact has allowed us to have the largest fellowship program at the University of Florida for dystonia research, created one of the top centers of the world for dystonia research and treatment and it really propelled us to the forefront of diagnosis and treatment and research.”

Taste also funds a project called the Tyler’s Hope Summit, which brings in the top researchers in the world. “When you get them together in a room, they share more and they come up with new approaches,“ Staab said.

Ultimately, Kitchens, Bannister and Staab all feel a deep sense of gratitude and even relief knowing they have Taste in their corner.