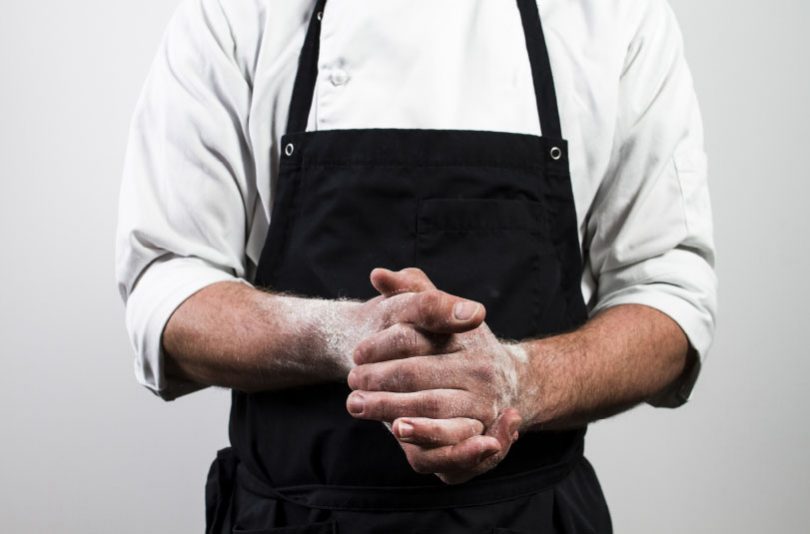 The Eastside High School Institute of Culinary Arts is well-known in Greater Gainesville — based on its high placement in competition (including No. 2 in the 2016 National Prostart Invitational), its exemplary catering service and its annual participation in Taste of Greater Gainesville.

The untold story is the story of the program graduates success. Some are now chefs at top restaurants, while others are restaurant owners or hold key positions on cruise ships and at Disney World.

Many Eastside Culinary Arts graduates have also gone on to The Culinary Institute of America and Johnson & Wales University, two of the top culinary arts and hospitality programs in the country.

Director Billie DeNunzio (who goes by Chef De) estimates that 80 percent of her graduates go on to some form of higher education.

“I enjoy tremendously seeing what happens with the kids,” she said. The graduates success contrasts with the skepticism parents used to have about their children going into what was considered a vocational field, preferring college prep.

“The Food Channel was a huge help to us in bringing awareness of the industry,” DeNunzio said. “Now, the parents are very pleased; they realize that were preparing their children for a profession.” 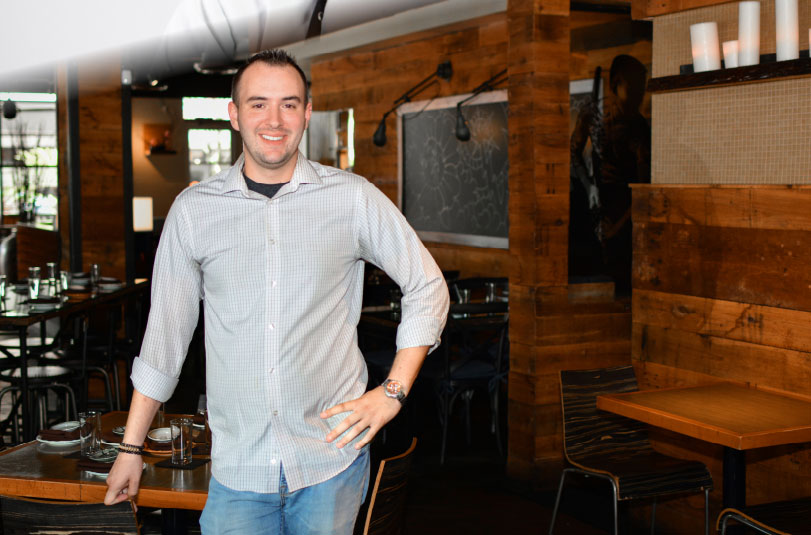 Shane Danner, a graduate of The Culinary Institute of America, is a sales manager for Dragonfly Izakaya & Fish Market in Doral, Florida.

Danner, a graduate of The Culinary Institute of America, is a sales manager for Dragonfly Izakaya & Fish Market in Doral, Florida. He previously worked at high-end restaurants in Hawaii and Maryland.

“I talk with Hiro at least once a week, and I have a sense of ownership,” he said.

At Eastside, he took more than the normal two periods a day in the Culinary Arts Program. By taking online classes for other subjects, he was able to take five periods in the program his senior year.

That year, the Eastside team that he was on won the state title in the National Prostart Invitational, a competition sponsored by the National Restaurant Association.

While in high school, Danner also worked at Mildreds Big City Food, starting as a dishwasher.

Why all the work in high school?

“But, when you did something that upset her, you would know it,” he said. 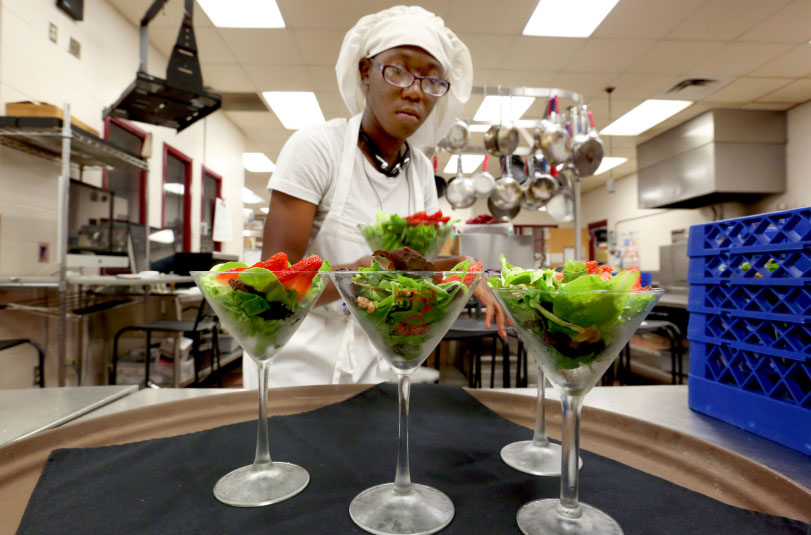 Wilson, who graduated from The Culinary Institute of America 17 years ago, now works for Swiss Chalet Fine Foods, where he helps high-end chefs throughout Pennsylvania and New Jersey import European pastry products. He was previously the executive pastry chef at The Ritz-Carlton Philadelphia.

He credits DeNunzio with starting him on the path to success.

“She was my first chef,” he said. “She saw the drive within me, how interested I was in learning, and she individualized how she taught me — just as she does with everyone else.”

“I’m still in the industry because of Chef De and Chef Steve, he said. My experience with them opened the door to my lifestyle.”

DeNunzio is still his role model.

“She’s a wonderful human being, and she showed me that authority figures don’t have to be jerks or authoritarian,” he said. 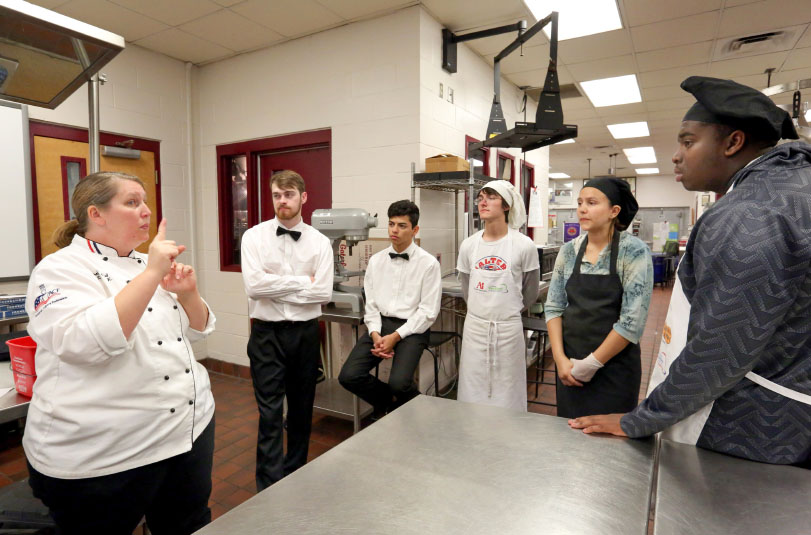 Reshard, 25, owns Lil Mama’s Kitchen in Daytona Beach. After graduating from the College of Hospitality and Culinary Management at Daytona State College, she developed a large clientele for her soul food cooking.

While attending Eastside, Reshard saw a presentation by Chef David Weir of Daytona State College. This led her to enroll in the colleges culinary arts program.

After a stint cooking at Florida Hospital Memorial Medical Center in Daytona Beach, Reshard became inspired to start her restaurant.

“It’s not easy at all,” she said. “The biggest challenge is keeping your overhead low.”

Waters owns LEJ Pretzel Company, a specialty bakery on south Mainstreet that does traditional Bavarian-style pretzels. She participated in the culinary arts program during her junior and senior years. She enrolled in the Eastside program for fun.

“Culinary was my passion, but I didn’t see it as a career; I thought I would go to a ‘real’ college and get a ‘real’ job,” she said.

She soon learned that culinary arts offered many career opportunities. She gained experience working at Embers Wood Grill under Executive Chef Briton Dumas, also a graduate of the Eastside program.

“They can be hard on you, but they emphasize really important things — how you stand, smiling (and) making eye contact,” Waters said.

Incorporating these intangibles helped her and the other members of the culinary arts team place in the top 10 in national competition both her junior and senior years.

Waters won a variety of scholarships, including ones from competition and one to play soccer at Johnson & Wales North Miami campus.

“I never would have accomplished what I have without the Eastside program,” she said. 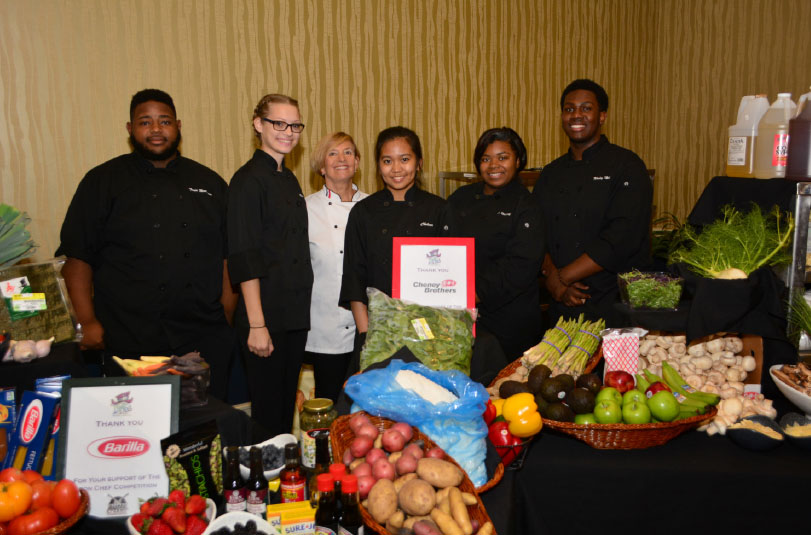 Chef Billie DeNunzio with her students at the 8th annual Taste of Greater Gainesville.

The program is about more than cooking.

“We hook them with culinary,” DeNunzio said. “They see how much fun it is on the Food Channel. You never see anybody ordering food, doing inventory, doing dishes. Its a rude awakening when they have to do all these things.”

“You have to use math to calculate the yield you’re going to get when you buy fish,” DeNunzio said. “You need to use English correctly in preparing a menu.”

“A big part of running a restaurant is staffing,” DeNunzio said. “You have to manage people.”

The program also operates a coffee bar, and students are responsible for the entire operation.

“They think the idea is just to have a coffee bar,” DeNunzio said. “However, the real idea is entrepreneurship. The students order all the supplies. They do all the advertising (and) all the marketing.”

“If the students run out of coffee or mocha or chocolate or anything, then its just the natural consequences,” she said. “They have to talk to the customers, not me.”

In 1990, Billie DeNunzio began as a food and nutrition teacher at Eastside High School.

“I thought I would stay there a year or two and then go get a real job,” she said. “Little did I know this would grow to be a job and a half.”

Before moving to Gainesville with her husband, she had worked for Georgia Power in Atlanta, helping the company promote all-electric homes.

“We brought in celebrity chefs such as Julia Child for cooking demonstrations,” she said. “That got me really interested in food. That’s when I really got the bug.”

At Eastside, her first commercial stove was  one the school cafeteria had replaced.

“We would bake a cake and have to turn it around and put it back in halfway through because the stove cooked so unevenly,” DeNunzio said.

Early on, DeNunzio tried to create a restaurant-like atmosphere in her classroom by placing mirrors she bought from Lowes on a blackboard.

“We wanted it to look like a window, and we made curtains,” she said.

When administrator Dave Edwards began creating career academies for Alachua County schools in 2000, the culinary arts program was among the first.

Voters approved a bond issue that funded buildings for the career academies, including one the culinary arts program still uses.

DeNunzio was already enjoying the progress when Barbara Finlayson contacted her and offered to volunteer. Finlayson, who died five years ago, had trained at the Le Cordon Bleu culinary arts school in France. “She pushed me to become a chef; she became my mentor,” DeNunzio said.

DeNunzio started taking graduate classes at The Culinary Institute of America and Johnson & Wales (which awarded her an honorary degree.) She continues her own study each summer. More than that, shes sought-after as a lead site visit evaluator of culinary arts programs for the American Culinary Federation. She also edits culinary and hospitality textbooks for the publishing house Pearson.

DeNunzio became inventive when she introduced ice carving — a skill the program has become known for. She was faced with the problem of buying ice at $100 per block.

“That opened up the program to help from some of the chefs in town,” she explained. “I was giving them ice. My only requirement was for them to come in and do (ice carving) with the students.”

The program has grown to 75 students each year, with 60 percent of them from the Eastside attendance area and 40 percent from the rest of the district. The male-female ratio is 50-50.

As the program grew, the district added a second teaching position, held by Chef Pam Bedford. “Its important to have two teachers,” DeNunzio said. “We have two parts of the house. Its important to maintain safety when you’re doing ice carving with chain saws and using knives.”