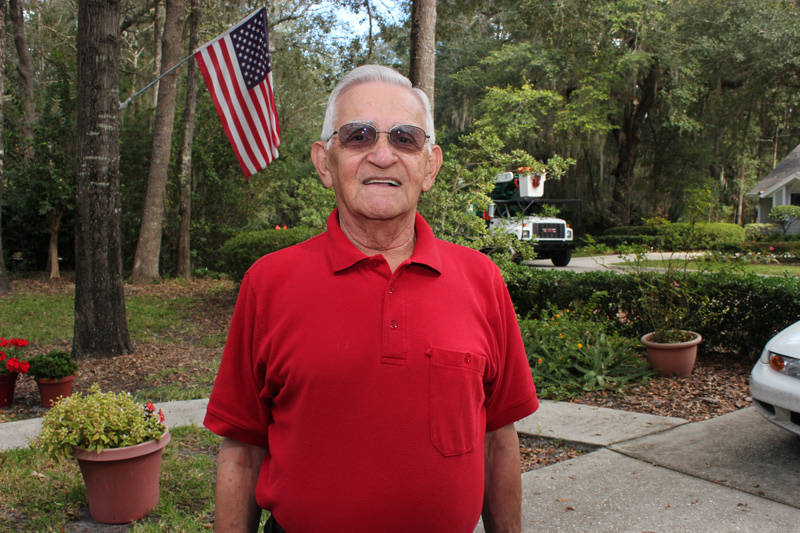 When Sol Bleiweis is asked a question, he responds with a story, because the plot of his 83-year-old life features so many incomprehensible climaxes that “I’ll give you an example…” is the only way to relay its proceedings.

His stories have been told. In 1944, Sol, an 11-year-old Jewish boy, and his family were stripped from their homes in Poland and shipped to Auschwitz-Birkenau concentration camp.

The Nazis shot and killed Sol’s 16-year-old brother directly in front of him.

They enslaved him, forcing him to build the single-person crematory in which they intended to kill his friends and family and, when he sabotaged it, beat him until his body was a single, giant blood clot.

When he was liberated May 8, 1945 after treading the Death March from Sachsenhausen-Oranienburg concentration camp to Bergen-Belsen, he held his mother in his arms as the last bit of life escaped what was left of her 50-pound body.

He traveled Europe searching for displaced loved ones, only to find that 90 percent of his family had been killed.

He went back to school in Germany, where he played professional soccer. He stipulated a Star of David be embroidered on his uniform so the public would know that his deft skill and persistence were desired by the very country that tried to physically and emotionally squash it only years earlier.

Having already experienced the most brutal pain perceivable, he then became a professional boxer and boxing champion of the Holocaust survivors.

“I learned to take pain and not even worry about it anymore,” Sol said. “This is why I became a fighter, because I didn’t fear anything or anybody. Nobody could punish me more than the Germans did.

He joined the United States military and later moved to New York City, where he met Beverly, his wife of 50 years. He worked his way from immigrant and Korean War veteran to owner of Soldek Fabrics textile company, had six children – now successful adults-, traveled the country and the world and now lives in the Haile Plantation.

But if Sol was once the stories that comprise his heroic climb from an unspeakably tragic adolescence to the pinnacle of success and embodiment of the American dream, today, he is the trite advice he extracts from them — advice he does not withhold.

“People don’t know; you have to enlighten them,” Sol said. “Life is too short; you come here for a short visit. I always think positive.”

This advice, solicited or not, delivered in hackneyed clichés earns an unprecedented degree of credibility when it spews from the same lips over which dirty snow, tree bark and rotting garbage scraps once passed as the primary means of nutrition.

Having once sledded through the snow on a shuttle head down Brenner Pass into Italy, seeking rescue but receiving betrayal and cruel castigation by the Gestapo, it was not with whimsy that Sol fixed a stern, piercing gaze and said,

“You can break the body, but you can’t break the mind.”

The boy who from wooden barrels constructed a tunnel under the concentration camp’s electric wires to elude Gestapo guards and smuggle food to the women and children’s camp, today is the man who teaches.

“If you have the will to live, you’re gonna live — but you have to fight.”

For 30 years, Sol has traveled to speak to crowds at churches, synagogues, Holocaust remembrance events and anyone who will heed his tale. He doesn’t bring notes.

“You don’t have to think,” he said. “Everything is engraved.”

Perpetually retelling — or rather, reliving — memories rife with inconceivable despair is difficult and draining, he said. But the unwavering confidence with which he approaches this and every obstacle is bolstered by a reinforcement. A promise.

“I promised my mother, when she was dying in my arms, ‘As long as these eyes are open, I will tell the world that there was a Nazi concentration camp, and they tortured and killed people,’” he said. “People always say, ‘It can’t happen to me.’ It can.”