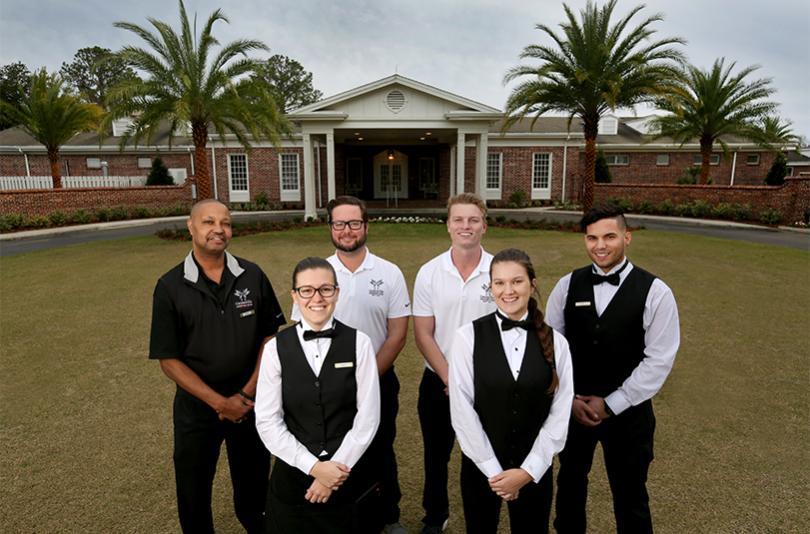 When you hear the words country club, where does your head go? Is it immediately to the plush greens and the business deals cut on the golf course? Is it the extensive social calendar or private dining experiences?

What hasn’t changed is the togetherness of like-minded people who share a vision and a passion for a club setting. Like most country clubs, GCC is a membership club that is made up of many residents who are active in the community. It revolves around the golf course, the tennis courts, the swimming pool and the restaurant. GCC is driven to expand upon that and to be both a destination and a focal point for residents who enjoy a setting to meet and mingle, talk business and relax.

The year 2018 ended with a big change for the club. Joseph Hernandez, a former resident of Alachua County, graduate of the University of Florida and current board member of the University of Florida Foundation was looking for investment opportunities in the golf arena, specifically in Florida. When he heard about the opportunity at GCC, it was a match made in heaven. It was an opportunity to invest in a community he loves and apply a strategy to create the new modern-day club.

“The club industry is changing,” he said. “We’re trying to bring new life to it — a younger, more energetic, more entrepreneurial group of members — but also to offer services beyond just a golf course. We want to bring added value to the members, things like a better dining experience, an involvement in music and art and a community to allow for fraternizing and network building. We hope that this will be a center for a community of families and intellectuals and business people, lovers of the arts and fine food and fine wine. The golf course is amazing, but it’s only part of the equation. You need to offer more.”

To that end, Hernandez scoured 100 applications for head chef and hired Dominique Fortin, an award-winning chef who previously worked for a Three Star Michelin restaurant in Tours, France and has made culinary appearances on Good Morning America. He also served as personal chef to a French four-star general and owned his own restaurant. Restaurants Estella’s and Sebastian Alexander opened in January. Estella’s is a members-only restaurant that will specialize in French fusion, and Sebastian Alexander is a semi-private, reservation-only restaurant that serves a Prix Fixe menu.

Another area of improvement that is the members-only bar, which is getting a makeover. Hernandez, a wine enthusiast and collector, has a vision of creating the best wine collection in the state and is going to have all 100 wines in the Wine Spectator Top 100, which he calls the “100 Bottles of Wine on the Wall” and several rare Bordeaux vintages.

“There is nothing more special than pairing amazing wines with great food and celebrating and enjoying those experiences with cherished friends and family members,” he said.

The golf course is being spruced up – from repaving the cart paths to refilling the bunkers. The pool is being resurfaced, and the famed diving boards are returning. A weight room has already been added, and an art gallery with rotating openings featuring local and collectable artists has been installed. The beloved Gator Pro-Am, pairing up professional golfers and celebrities with amateurs competing for charity, also will be returning.

The opportunity for a nice night of dining as a family or a place to meet friends for a drink is still at the center of country club life, and upgrades are no exception here.

What Hernandez and his team want to change, however, is the perception of what a country club is. This country club is going to be so much more. This is the community’s club. There will be authors’ nights, partnerships with charities for hosted events and wine and food tastings.

There will also be entrepreneurial nights. This is very important to Hernandez. As a young struggling student entrepreneur at UF, Hernandez was given a job washing glassware in a lab by a GCC member. That UF professor was instrumental in developing his scientific curiosity and is still a member of GCC today.

“Gainesville is a transient community. Unlike most transient communities where residents come and go, those that live here always keep a special place in their hearts for this community,” said Assistant General Manager Erin Henderson. “They come back for football and basketball games. They plan vacations here. Many return after leaving. It is part of what makes Greater Gainesville so special.”

Hernandez is a perfect example of this. A Cuban Immigrant and New York City-based biotech entrepreneur, he has an undergraduate and two graduate degrees from UF. The bond to this community has never left.

In 2016, Hernandez donated $10 million to the UF Department of Chemistry to seed innovation and to accelerate the entrepreneurial spirit within the department.

“Joe’s purchase of the club benefits this community in so many ways,” said longtime member and past Board President Dink Henderson. “The additions and improvements put into place will not only benefit our current members who were eager for some stability and upkeep, but also will attract younger, diverse families.”

Buying the GCC created another link in a chain that connects Hernandez to Gainesville.

This is a transformation. Greater Gainesville deserves a luxury club. It helps attract new residents to the area. This is a passion project for Hernandez to revitalize a staple of the community and attract new families to become members.

“The membership here has been so utterly supportive,” he said. “I have never seen so many committed individuals. I want to thank them and the previous board for shepherding the transaction with me, and I look forward to keeping those members happy, exceeding their expectations, bringing back some of the old members and bringing in new members who have maybe never thought about joining a country club. I want people to come here and enjoy fine food, fine wine and fine people.

“I think the country club is a gem in this community,” he said. “I played here when I was an undergraduate. All of those things continue to pull me back. It’s an amazing place.”