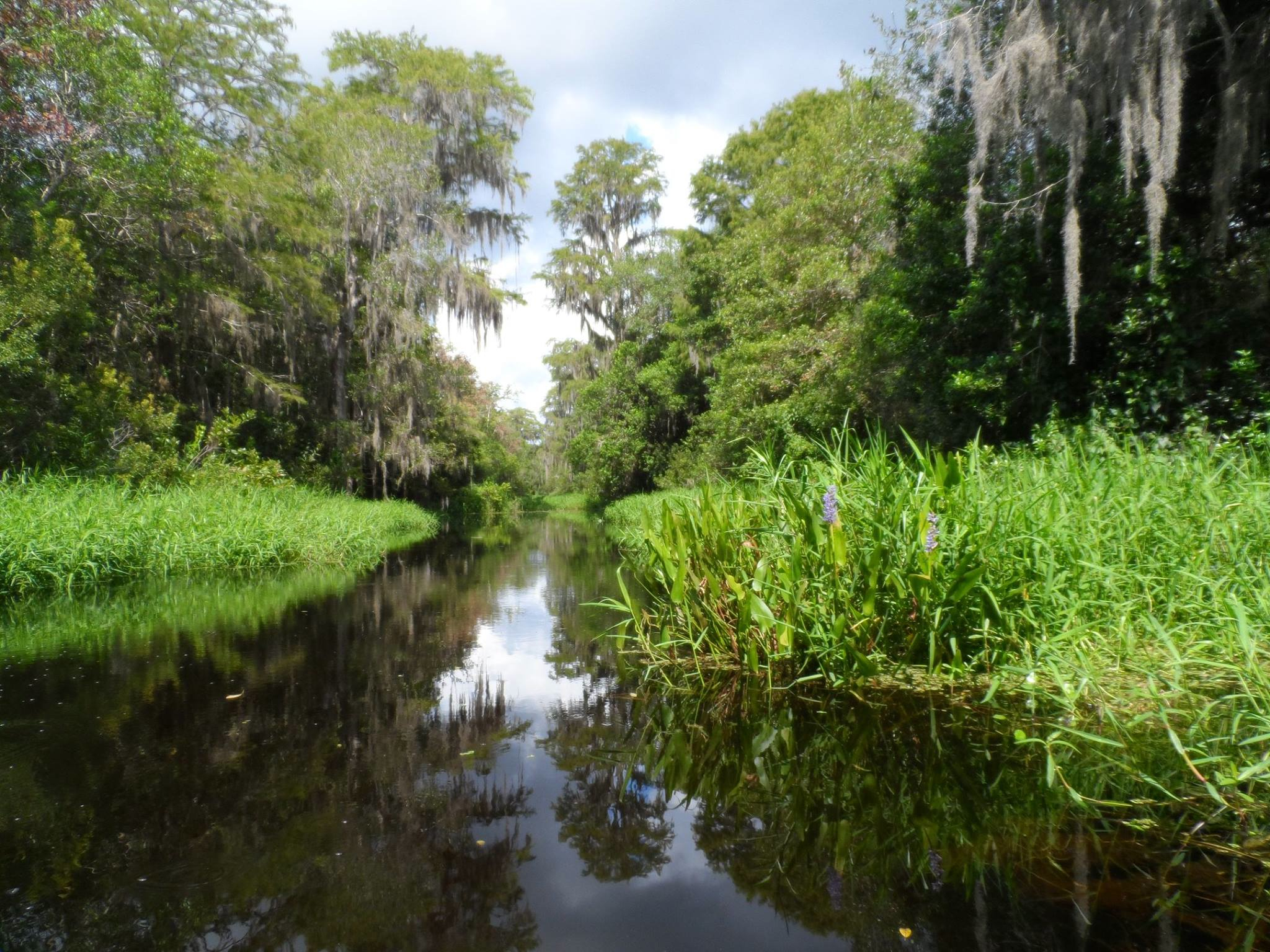 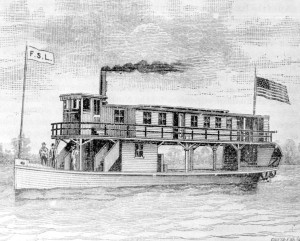 North Florida has abundant opportunities for people seeking outdoor recreation. Greenways and rails-to-trails projects like the Hawthorne Trail are great examples of how historic land can be converted to meet present day demands for walking, running and cycling. Our area is also home to the Waldo-Melrose Blueway, which is open to kayaks and canoes and follows a 130-year-old shipping canal between Lake Alto and Little Lake Santa Fe.

When Steam was King

Following the Civil War, Central Florida’s economy grew with an increasing demand for citrus. Located at the southeast end of Lake Santa Fe, Melrose was surrounded by orange groves. It also enjoyed a reputation as a tourist destination for northern visitors. But, Melrose had one main disadvantage: It was disconnected from the Florida Railroad that passed through Waldo, nine miles to the northwest. The Bellamy Road connected the two towns, but deep sand meant the trip took four hours by horse or wagon. So, a solution was created in the late 1870s: A canal would be dug joining Melrose and Lake Santa Fe to Lake Alto, followed by another canal to the railroad depot at Waldo.

On March 2, 1877, the Santa Fe Canal Company was formed. Board members included General Elias Earle, whose cotton plantation on the west side of Lake Santa Fe led to the area’s name of Earleton. Ned Farrell was the engineer and superintendent of the Canal Company. One publication called him “a leading spirit in the advancement and prosperity of Waldo.”

Two months after incorporation, Joseph Voyle surveyed the best route for the canal. It would begin a half-mile from the railroad depot in Waldo (a spur line would connect the dock to the railhead) and then run a mile east to Lake Alto. At the southeast side of Alto, another canal would be cut nearly two miles in length to reach the western edge of Little Lake Santa Fe. From there, a steamship only had to navigate the “pass” between Little Lake Santa Fe and Lake Santa Fe to reach Melrose. The total trip would be 10.5 miles (early maps also showed a canal to Lake Geneva, but it doesn’t appear this section was ever dredged).

By the next year, a steam engine dredge was constructed. The dredge was placed at the far western terminus of the canal in Waldo. The work went slowly. The first cut was nearly a mile long and ran through forests and swamps of longleaf pine, saw palmetto, water oak, eastern red cedar, muscadine grape and wax myrtle. The canal was 30 feet wide and averaged 5 feet in depth. The entire excavation took over a year and reached Little Lake Santa in May 1879.

The first steamboat to traverse the canal, named the F.S. Lewis, had a wood-burning steam engine and a side-wheel paddle. The boat was approximately 70 feet long and had two decks — the upper for passengers, the lower for crops and goods. The F.S. Lewis completed its maiden voyage on April 26, 1881. Captain S.C. Barker led the unlucky trip — as they pushed through the lake passage, the drive shaft to the paddle wheel broke.

The F.S Lewis continued to carry passengers and citrus to and from Waldo and Melrose with some success, but like all “new” technology, it also had its share of problems. It drew too much water, so it was unable to come close to shore in places like Earleton to deliver the mail. Another time, a heavy wind caused the boat to capsize. The final blow came in February 1884. As the F.S. Lewis chugged through the canal, the boiler ruptured and caused a fire. Efforts to save it failed, and the steamer burned. Without a boat to carry goods and passengers, the people in Melrose and Waldo were forced to traverse the sandy Bellamy Road once again.

The Florida Railway and Navigation Company came to the rescue. Seeing the profit available from carrying goods and passengers to and from Melrose to their railroad, they shipped the Alert from Jacksonville. The Alert became the most popular boat to traverse the canal during its history.

Due to the canal, both Waldo and Melrose prospered in the late 19th century. The Harrisburg Times reported that, “Waldo is one of the great orange centers of Florida, over 200,000 boxes of the luscious fruit having been shipped from there last year.” The city had an opera house, three hotels, a sawmill and a cigar factory. Many residents kept a grove of orange trees on their properties and shipped the fruit on the railroad to eastern markets.

Melrose served as both a port for the surrounding citrus farms and a tourist destination. One popular attraction was the Balmoral Hotel, a two-story U-shaped building on the west bank of Lake Santa Fe. An 1882 publication about Alachua County bragged that the “commodious and picturesque Balmoral Hotel occupies a commanding place” on Lake Santa Fe. Only a historical marker is left today to note the place where the hotel stood.

In a boosterish article titled “Florida As It Is,” a Chicago newspaper predicted in 1888 that Waldo was “destined to be a place of great importance” with its location in the center of the Great Orange Belt. “This section (of the country) has enjoyed almost complete immunity from the severe frosts that have damaged some other portions of the State far south of this, and it is though the large lakes are the direct and chief cause of this blessing.”

The reporter must have been shocked to read the news on December 29, 1894. Temperatures as far south as West Palm Beach plummeted below freezing. The weather warmed for several weeks in January, but then another severe freeze occurred on February 8, 1895. Oranges became ice balls and dropped from tree limbs. Witnesses reported hearing gunshot-like sounds as sap froze and tree bark exploded.

Rather than deal with the possibility of another freeze, grove owners moved further south; others moved to California or into the Caribbean. In Waldo and Melrose, jobs were lost and land values plummeted. The Canal Company ceased sending boats through the canal.

As automobiles became more popular in the early 20th century, roads improved and soon it was easier and less expensive for people and goods to travel by road. A Melrose resident built a boat called The City of Melrose and as late as the mid-1920s still transported people and goods on the two-hour trip from Melrose to Waldo. The City of Melrose was the last known commercial boat to use the canal.

Years passed, and the canal filled with runoff soil and water hyacinths. As it became impassably shallow, even for low-draft boats, the abandoned canal became a relic of a bygone era.

Efforts to revitalize the canal for recreational use began at the start of the 21st century. In 2005, Alachua County Forever purchased 184 acres along the canal and is now working with the city of Waldo and landowners to clear and improve the original route of the canal for kayak and canoe traffic. The group’s goal is “to create and enhance a system of linked trails, canals and lakes providing nature-based recreation in the Lake Alto and Lake Santa Fe area.” Much like the canoes and kayaks on nearby rivers, the recreation could be a boon to local economies.

The canal hasn’t been dredged yet, but when lake levels are high, you can travel the entire route just like the F.S. Lewis or Alert. Sections between Lake Santa Fe to Lake Alto are overgrown with maidencane, and submerged trees must also be carefully navigated. But, as you paddle through the quiet of the canal, it’s easy to picture another era when it was the lifeblood of surrounding communities.