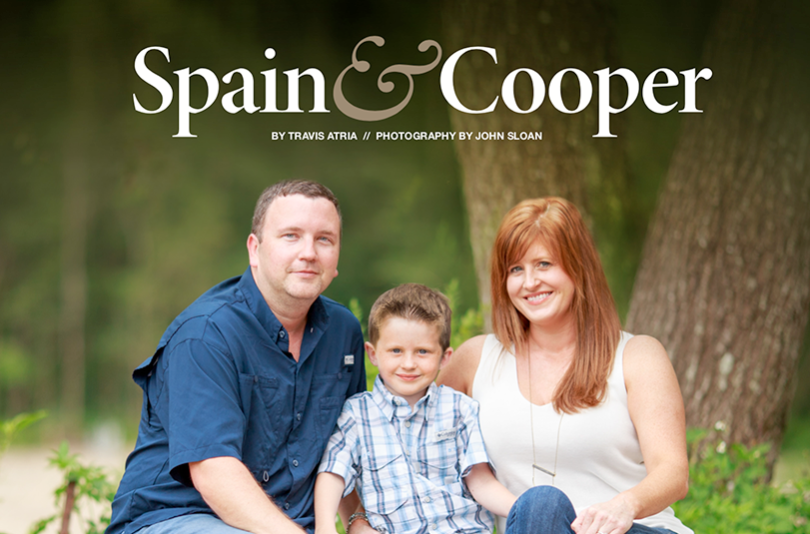 Written by by: Travis Atria, Photos by John Sloan

A business, like a home, needs a strong foundation. Spain & Cooper Homes has spent 46 years proving this.

In 1972, Tom and Susan Spain founded Spain Construction and began building homes in Gainesville, using quality materials at affordable prices. As they grew into the 21st century, they took on Mike Cooper as a member in 2004, and eventually Mike took over the business with his wife Kristen in 2012.

“It was a passion, something that I enjoyed,” Mike said. “I bought a house here in town, ripped it apart, rewired it, and built additions to it with Tom’s help. That’s how I got started.

Mike considers Tom and Susan part of his family, and the two men worked together until Tom retired. Now, Mike spends his days supervising at Spain & Cooper construction sites, with a hands-on, intimate approach.

“We’re involved from day one designing the house all the way through the build,” he said. “Our decorators can help furnish the houses – it’s a complete turnkey process.”

For Mike, designing custom homes is perhaps his favorite aspect of the job. “To meet the people, find out what their needs are, what their challenges are, to try to come up with something that fits every part of their lifestyle, it’s fun.”

Currently, Spain & Cooper is working on several housing developments in Gainesville, including Wiltshire, Greystone and Wexford. 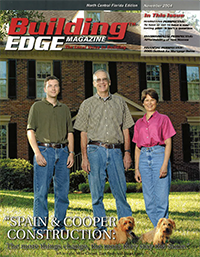 Mike Cooper with Tom and Susan Spain, in 2004. The couple founded Spain Construction in 1972 and Mike and Kristen Cooper took over the business in 2012.

“Wiltshire was a long time in the making,” Kristen said. “We had been eyeing the property for many years as a future development and finally had the chance to purchase the property recently and broke ground earlier this year.”

Kristen described Wiltshire as “an enclave community within walking distance of Fresh Market and Publix, and many restaurants.”

Greystone, located off of NW 39th Avenue, “combines traditional architecture with the charm of tree-lined streets, sidewalks and antique street lighting with a close proximity to I-75, restaurants, and shopping,” Kristen said.

As for Wexford, a gated community featuring one- to two-acre lots on Parker Road, Spain & Cooper plans to break ground this fall.

In 2013, Kristen left her position as executive director of HOPE – Horses Helping People – a local nonprofit organization, to “be involved with the family construction business.” She said she also enjoys working on the interior design process.

She said she enjoys bringing the couple’s five-year-old son Colton to the construction sites.

“He has grown up a regular on the job sites and loves interacting with the subcontractors and learning about all aspects of the home building process,” Kristen said.

While the company focuses on building custom homes, Mike said they have been “expanding the remodeling side of the business,” citing a “strong demand.” However, whether remodeling or building from scratch, Mike and Kristen noted the importance of focusing on only a few projects at a time in order to give the best service possible to their customers.

“It’s a smaller, niche market,” Mike said. “Word-of-mouth is a big part of the business. We’ve had quite a few repeat clients. To me, that’s the best compliment.”

Two of those repeat clients are Rebekah and Ken Kurdziel, who have built two new homes with Spain & Cooper and are looking to build a third soon.

“We have been privileged to see our dreams come to reality, and then exceed what we were hoping for,” they said. “The firm is pleasant to work with, keeps its timelines and budgets, and smoothes the entire process.”

“We built our second home with them because of the high quality of their workmanship and their honesty and integrity throughout the building process,” they said. “Our current home was a true custom home that we designed from the ground up. We were able to take our basic concept and then in conjunction with the Spain & Cooper team turn the design into the finished product that worked perfectly on our lot. In addition to the high quality of their work, Spain & Cooper stands behind their homes and are available to address any issues, no matter how small, even after we moved into our home.”

For his part, Mike said he feels gratification from seeing a finished home.

“I really like seeing something be done, as opposed to an abstract project,” he said. “I enjoy building stuff.”

However, both Mike and Kristen agree that the greatest gratification is the relationships they have built with their customers.

“We don’t turn our clients over to a project manager,” Mike said. “We’re dealing with them the whole time. By the time the house is done, we’ve probably had some drinks together, maybe been to a social event together. A lot of friends have come out of the building process. It’s a very personal process for us.”