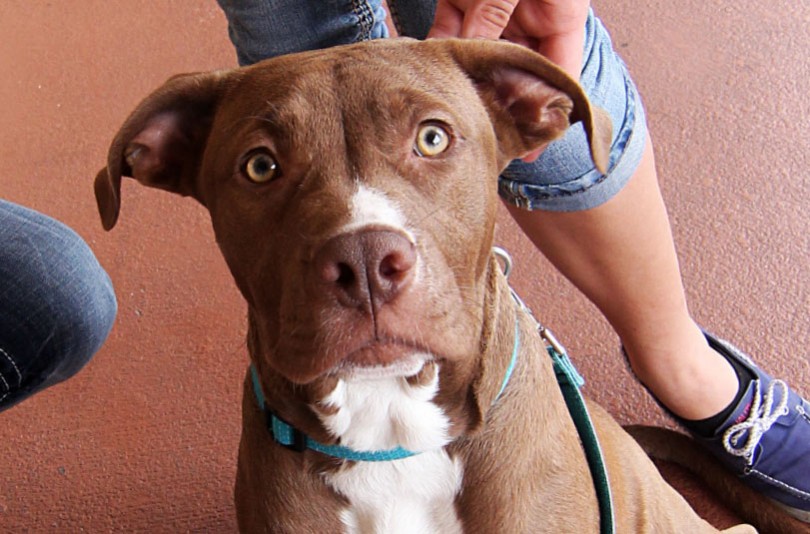 Mila came to Plenty of Pit Bulls in mid-February, one of 20 dogs rescued from a Putnam County dog-fighting bust in December. Sheriff’s deputies originally came to investigate noise coming from the woods when they stumbled upon the fight. Mila, less than 1 year old, is believed to have been either a bait dog or a future breeding dog. Since then, she and another dog from the fight were released to rescue group Plenty of Pit Bulls and are being fostered until they are adopted. “She really is a sweet dog; it’s disgusting somebody could do something like this to her,” said PPB volunteer Jeremy Schmidt. “She is just a puppy; I’m so glad they were able to get her out before real harm was inflicted.”

The nonprofit Plenty of Pit Bulls, founded in 2012, has helped rescue and rehabilitate Mila and over 150 other pit bulls. To learn more, visit popb.org.

Lucky, an 11-year-old cat, has become a staple at Gainesville Pet Rescue since he joined over a year ago. He was rescued along with three other cats from a Gainesville home after his owner tragically died when he was hit by a car while crossing the road to buy cat treats. “We would love for him to get adopted,” Danielle Martin, a GPR volunteer, said. “He is just a grumpy old man, set in his ways.” Lucky is a loving cat that, like most animals, needs some time to adjust. “He is always purring and rubbing on you whenever he is not sleeping,” Martin said. He and many other cats and dogs are up for adoption every Thursday, Friday and Saturday at the organization’s SW Archer Road location.

The nonprofit Gainesville Pet Rescue rescues cats and dogs from kill shelters and then fosters them until they are adopted, no matter how long it takes. To learn more, visit gainesvillepetrescue.org.

Matilda was a true Easter bunny, given as a gift in a young child’s Easter basket several years ago. She was later abandoned and rescued by the Alachua County Humane Society and then by Gainesville Rabbit Rescue. “People fail to realize that the baby bunnies will not stay that small forever,” Betsy Duncan of the rabbit rescue said. “Just like all animals, they grow up to be full-sized rabbits.” Matilda is just one of the hundreds of rabbits kept in the small farm-garden facility. “People tend to not think of rabbits as legitimate of pets as dogs or cats, but they are,” Duncan said. “They have just as much personality and are loyal; you can’t just dump them into the woods.”

The Retirement Home for Horses Inc. at Mill Creek Farm:

Florida born and raised, Cinderella came to Mill Creek Farm and the Retirement Home for Horses from an abandoned field in Miami-Dade where she and 11 other horses were found starved, and six more were found dead in 2012. She and her brother Eli were then retired to Mill Creek Farm in High Springs, Florida, by the local ASPCA (American Society for the Prevention of Cruelty to Animals). Cinderella is a crowd favorite at Mill Creek Farm on Saturdays, when up to 200 visitors come to view the horses and tour the massive grounds that are home to over 150 rescued horses. Cinderella loves to show off her two white “slippers” so that visitors and volunteers will give her carrots. The brown-haired beauty will stay at Mill Creek Farm for the remainder of her life. None of the rescued horses are ever put back up for adoption. When Cinderella passes, as Eli did two years ago, an oak tree will be planted in her honor. The hundreds of beautiful oaks all over the farm represent the many horses rescued and retired to the north Florida sanctuary.

The nonprofit animal sanctuary, founded in 1984 by English natives Peter and Mary Gregory, welcomes volunteers throughout the week from 11 a.m. – 3 p.m. and visitors on Saturdays with an entry fee of two carrots (but you will probably want to bring more!)