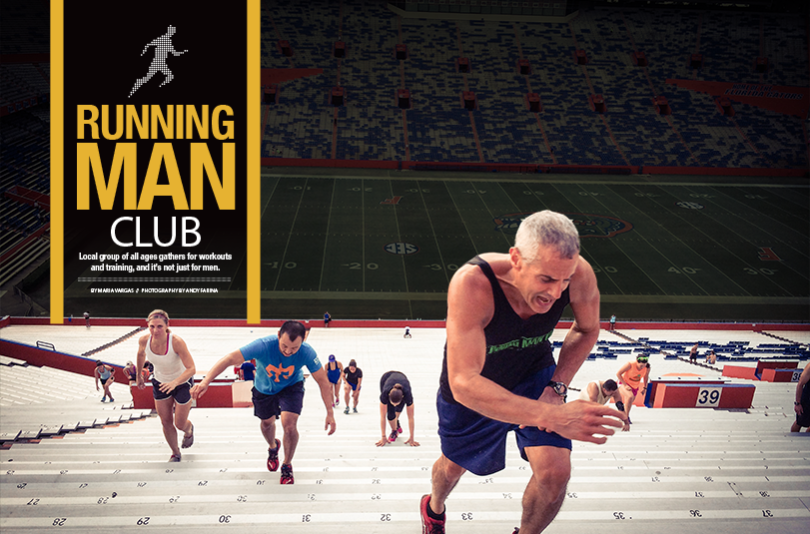 Committed to inspiring the Gainesville community to become better together through fitness, Andy Farina and his Running Man Club (RMC) are dedicated to helping people achieve new challenges.

At age 55, Farina is in the best shape of his life. He competes in 100-mile trail races and obstacle courses, such as the Spartan Race; he is a trainer at Gainesville Health and Fitness; he has his own coaching company (Fearless Health) and is the founder of RMC.

RMC started in 2006 when he began weekly workouts at Ben Hill Griffin Stadium at the University of Florida. Soon many of his friends joined him. Farina said it became a weekly meet-up for people of all ages who wanted to train together and lead healthier lifestyles.

RMC is free and open to anyone in the community. The club is a family of motivated people who inspire each other to achieve things they never thought possible. RMC is more active now than ever, Farina said, with 10 to 25 people attending each workout.

“It’s all about being outdoors and remaining active,” Farina said. “We are so much better when we workout together, because we stay committed and encourage each other. That’s what makes RMC so special.”

But Farina has not always been the athlete he is today. He said he was born seven weeks premature and doctors told his parents he would never be able to walk. As a child, he wore leg braces and couldn’t participate in sports. It wasn’t until high school that he became determined to get into shape. He started playing basketball and joined the running team. But when he was 18, and finally feeling good physically, he hurt his back – an injury that plagued him into his late 30s.

Farina did not give up, but instead of high-impact sports he focused on injury prevention through improving muscular balance, massage and mental endurance.

“I calculated an estimated 23 years of pain, 24/7, as there were occasional seasons of relief mixed in there where the injury would allow me to, say, run stadiums,” Farina said. “But it was not finally resolved, and fully pain free, until about 2009.”

Farina said after all of those years of not running, he became comfortable with the uncomfortable, and applied that to other areas of his life.

“Do today what others won’t, so you can do tomorrow what others can’t – not for yourself, but for the good of others,” Farina said.

Allison Senkarik joined RMC in 2013 after learning about it through a friend. She said she was in shock during her first workout because it was tougher than she expected. But Senkarik didn’t give up and now has developed a passion for fitness and racing.

She said growth only comes from pushing yourself.

“RMC has helped me to become a more confident woman, athlete and mom,” Senkarik said. “Working out and building relationships with the members of this group has been such a blessing.”

Senkarik said that in 2016 she and other RMC members trained for the Spartan Trifecta, a combination of races with obstacles over 25 miles of rugged terrain. She said it was a daunting but amazing experience because RMC members supported each other throughout training and at the race. In March she completed her first triathlon at the TriGator Super Sprint.

“Andy makes working out challenging, yet exciting,” Clarke said. “It’s crazy how much a few weeks’ worth of HIIT whips you into shape.”

Farina encourages people of any fitness level to join them at RMC workouts and give it a try. The hardest thing is just showing up, he said.

“You have to crawl first, then walk, then run. Just start somewhere,” Farina said. “It’s important to surround yourself with people who motivate and encourage you. That’s what RMC is here for.”