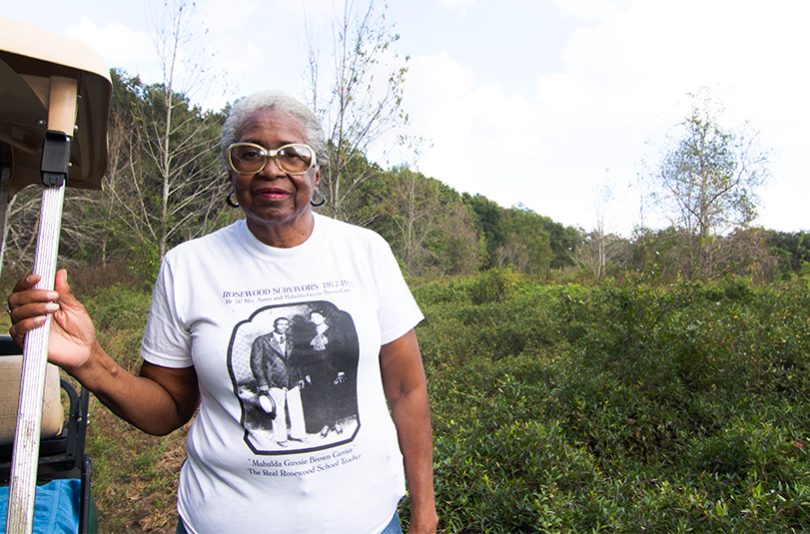 Written by by: Tracy Wright, Photos by Allison Durham

As you approach Lizzie Jenkins’ family farm, tucked away in the quiet town of Archer, a modest house sits on a property populated by chickens, goats and donkeys. As you approach the farmhouse, a rooster crows in the distance.

Lizzie emerges through a garage containing artifacts related to the Rosewood massacre that she has collected through the years.

Lizzie has dedicated the past 25 years to preserving, informing and memorializing the tragedy that occurred in Rosewood, Florida, in the early 1920s – an event that forever changed the lives of those in her family and so many of their friends and neighbors.

On New Year’s Day, 1923, a white woman named Fannie Taylor was assaulted. Residents of the nearby town of Sumner claimed her assailant was a black man, sparking race riots from angry white neighbors and the Klu Klux Klan, leaving mostly black casualties and wiping out the prosperous town of Rosewood.

Lizzie’s aunt, Mahulda Gussie Brown Carrier, was a schoolteacher, living in Rosewood with her husband, Aaron Carrier. The events of that New Year’s Day, and the week after, led to the near-lynching of Aaron and the brutal assault of Mahulda.

In 1943, when Lizzie was 5 years old, her mother sat her and her siblings down by the fireplace at their farmhouse and told them the story of Rosewood. After hearing the story, many things that regularly took place in her home began to make sense – why she and her siblings were instructed to run home every day after school and why the lights would go off every time a car drove on their dead-end road. Her parents lived in fear of the violence and the hate they had witnessed in Rosewood – fear they continued to experience throughout their lives.

The story of Rosewood never left Lizzie’s memory, and led her to start on a journey 25 years ago to research and collect as much information as possible to bring the story to life, respectably coached by her mother. She did it so that people would not forget what had happened during that ugly time in American history.

“I have carried the weight of Rosewood with me – the pain, the anger, the fear and the sadness – ever since my mom sat me down to tell me the story,” said the 80-year-old Lizzie. “She did that so the story of Rosewood would not be forgotten. I still carry my mother’s and my aunt’s fear and sadness. Part of why I do what I do is to heal for my mother and my aunt.” 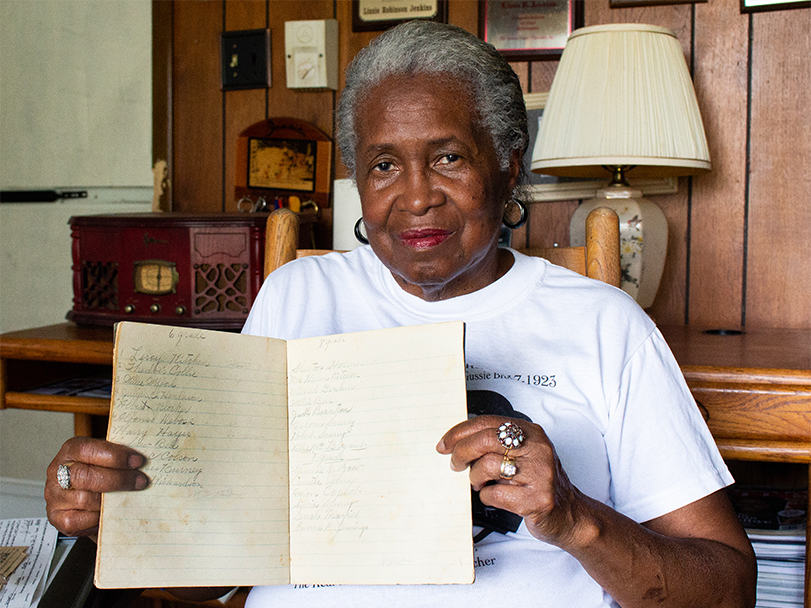 Rosewood as it Happened

Back in 1923, Rosewood was a thriving, mostly black, town with a few hundred residents, located 37 miles southwest of Archer on the main road to the Gulf. The town even had its own baseball team, the Rosewood Sluggers. Today, all that remains is a historic placard put there by Lizzie on May 4, 2004, commemorating the tragedy.

That New Year’s Day, after Fannie Taylor was attacked, white crowds from as far away as Gainesville gathered near Sumner in Levy County. Gainesville had hosted a Klu Klux Klan parade the day before.

Although Taylor had not specified a name or given details about her attacker, angry crowds had identified him as a black man, and they ultimately charged Lizzie’s uncle, Aaron Carrier, despite having no evidence.

Aaron was tortured and dragged behind a truck. Levy County Sheriff Bob Walker brought Aaron to jail in Gainesville to protect him, and in his absence the vengeful mob returned to Rosewood, this time looking for Sylvester Carrier and Sam Carter.

The group stormed the home of Sylvester’s mother, Sarah Carrier. Sylvester shot and killed two deputized white men when they entered the home. The mob then murdered Sylvester, matriarch Sarah Carrier, Sam Carter and Lexie Gordon, who were all at the house at the time. Mingo Williams, a black man who lived nearby, was also killed.

Another Rosewood resident, James Carrier, was captured and interrogated. They tried to force him to dig his own grave but two strokes had left him partially paralyzed. The men shot him and left him to die over the bodies of his family members.

Later that evening, the mob captured Lizzie’s aunt, Mahulda. Lizzie said the men tied a rope around her neck and took her to Sumner to interrogate her. They wanted her to admit that her husband, Aaron, had been part of the attack. When she wouldn’t admit it, and became indignant, the mob sexually assaulted her.

“My aunt was a strong woman even while in peril,” Lizzie said. “She never forgot the attacks on her innocent body. She never forgave them for the horrific assaults.”

In the days that followed, the mob wiped out the remainder of the town, burning 12 houses, one by one, until Rosewood was gone.

The sheriff arranged for a train to come and pick up the remaining residents of Rosewood. On the early morning of January 4, 1923, Mahulda was the last to board the train leaving Rosewood. The first stop was the city of Archer where Mahulda disembarked and returned to her original home on the farm.

Paralyzed by fear, the residents of Rosewood seemed to make a silent pact to never speak of the tragedy again, and to never return to Rosewood.

The repercussions of this horrific time in history haunted those who had experienced it – and their families. Although the events of Rosewood had ended, racism, segregation and Jim Crow laws persisted for decades.

Lizzie’s aunt Mahulda lived with the Jenkins’ family while teaching in Archer, but was on the run from conspirators her entire life, moving more than 15 times.

“I was very close to my aunt,” Lizzie said. “I could see the pain and fear in her eyes. It permeated her soul and I could sense it.” 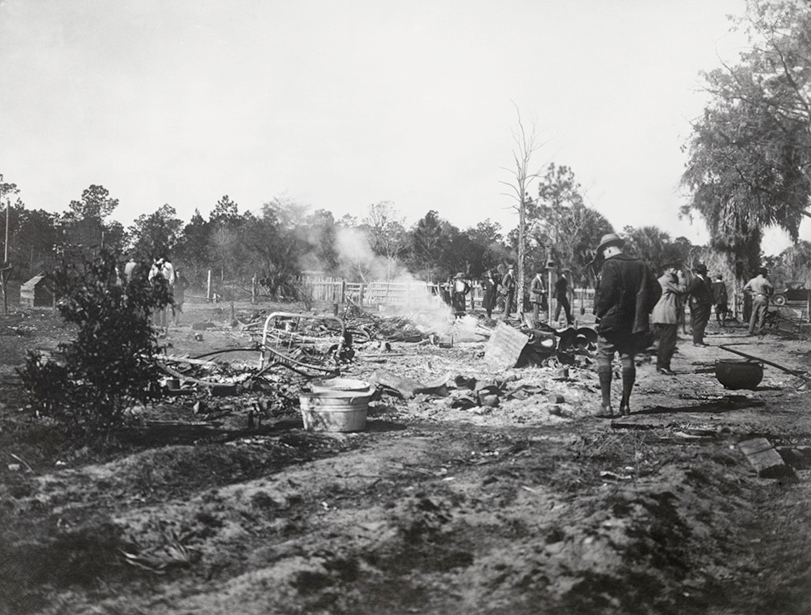 A History of Struggle

The pain that Lizzie feels for her family has come not just from Rosewood but also from the stories of hate she has heard from her family.

Lizzie’s great-grandmother, Juliann Sams, was taken from her parents’ home in Parchman, Mississippi. They roped her, tied her behind a wagon and forced her to walk to Jackson, Mississippi. She was then auctioned off to James M. Parchman and tied to the other slaves so that they would not escape. She was 13 years old.

The slaves were then forced to march nearly 600 miles to Archer, Florida, roped to a wagon. They were not well-fed and Juliann was whipped daily.

Juliann shared the same spirit of her future great-granddaughter, Lizzie.

“Even while being whipped, my great-grandmother would cuss the man out,” Lizzie said. “Finally, one day, when the hired gunman thought he was being disrespected, he beat her unconscious and left her for dead. The women in the caravan yelled to the hired gunmen to pick her up and put her in the wagon where they nursed her back to life. She finally made it to Archer.”

Stories like these – and of Rosewood – have emboldened Lizzie to carry on the work that she has been doing for 25 years.

“I remember my father was afraid of white men his whole life,” Lizzie said. “He worked for a white sharecropper who called him nigger and other awful names every single day. But one day, at age 13, I rose to the occasion and vouched for Dad. I put a down-home cussing on his boss and told my father when he cautioned me, ‘You are not those things he called you.’ Dad’s words of fear to me was, ‘You shouldn’t have said that’ with fear in his voice. The sharecropper never said anything back to me and walked away. I guess there was a method in his madness.”

Lizzie said that even when they walked into stores, they were told not to look up and to stay behind their parents.

“They did not want us to see the hate from others,” she said.

Lizzie’s father bought farmland and created a community park with a playground where Lizzie, her siblings and other black children could play since they were not permitted to play on white playgrounds. He also built a baseball field to keep them off the streets and safe.

As Lizzie grew up, the history of Rosewood remained a secret passed down through families just as it had been shared with her. But the story finally came to light in 1982 when a reporter from the St. Petersburg Times came to Cedar Key to research the area. He published an article about the history of Rosewood and expressed great surprise that the tragedy had not been better documented.

Meanwhile, Ed Bradley at “60 Minutes” did a television documentary about the tragedy; follow-up news reports were also published. Several of the sources for the story began documenting narratives of the Rosewood tragedy and seeking reparations for the survivors. Then-Governor Lawton Chiles expressed support for legislation and the House and Senate passed a bill in 1994 to compensate the victims of the attack.

Despite the legislation and news reports, many historical societies do not acknowledge the attack and the story of the Rosewood tragedy is not well known. This is why Lizzie’s work continues.

“I want people to know more about Rosewood because it symbolizes so many other tragedies that happened all across the country in the name of hate,” Lizzie said. “But if people can understand the events at Rosewood, they will understand more about the depth of black history in this country, this state and this area.”

Lizzie said Mahulda taught remedial reading in the basement of UF buildings, dressing like a maid so nobody would know what she was there to do.

Although she encountered career success, Lizzie said Mahulda lived a fearful and miserable life because of her experiences at Rosewood and after.

The Rosewood Foundation, Inc., sponsors a scholarship in honor of Mahulda Gussie Brown Carrier. The foundation is dedicated to building the Rosewood Black History Preservation and Research Center on Lizzie’s family farm, in memory of the Rosewood survivors and their descendants.

The foundation also has other projects in the works, including plans to produce a documentary with historical facts uncovered by Lizzie, producing two songs, “Rosewood Florida” and “Rosewood, No More,” and marketing prints of “Hope Prevails” by Rosewood Resident Artist, Pedro Jermaine, just in time for Christmas.

Lizzie is writing her life story, which includes how she unlocked the secrets of Rosewood through diligent research.

“My mother encouraged me to always research and report the truth,” Lizzie said. “I am trying to break through the fear for those who couldn’t before me. If we tell the story correctly, we can learn from it. We do not have to hate; we can respect each other.

“I am writing this book to speak to them and inform them. Hate does not inform anything. History does not need to repeat itself. I hope I can help people learn to never have this happen again.”