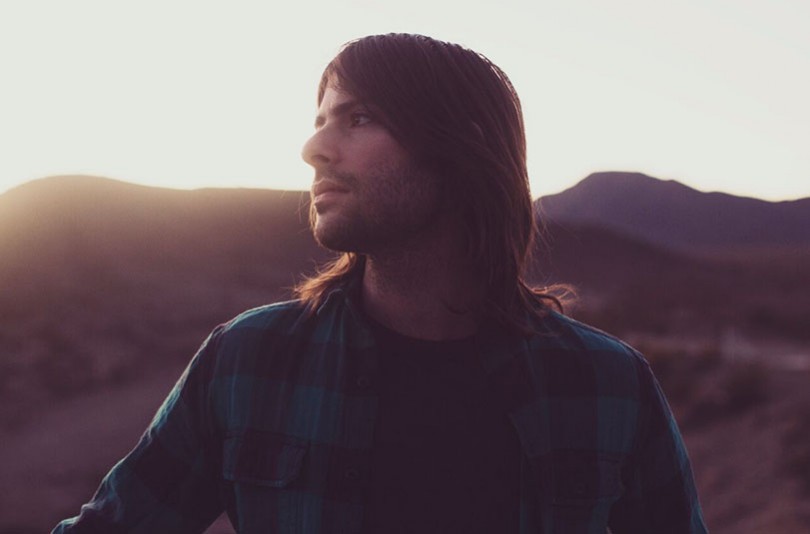 In an ideal world, popular bands would be recognized for their creativity, authenticity and, of course, their music. Perhaps, if this were the case, the longevity of a band would be a more common indicator of their popularity. But in the real world, it doesn’t seem to work this way. In fact, when you’re an up-and-coming band, you might do anything to stay relevant, even if that means riding the wave of mainstream music and sacrificing uniqueness. Many artists have trouble deciding their role in this cut-throat industry, and Robert Schwartzman, lead singer of Rooney, once did too.

Schwartzman started his hit band in 1999; it was initially a couple of high schoolers getting together to live out their fantasies of being musicians. Ignorant of what the music business was like or what it demanded, they started creating music. There was no social media, no Spotify and no iTunes. Success was measured purely based on the ability to make it on the radio and gain popularity via word-of-mouth, both of which, Rooney accomplished.

“We were selling a good amount of records every week, not like a crazy amount,” Schwartzman said. “But it was enough to be considered respectable.”

But Rooney’s stability wasn’t the only thing that grabbed people’s attention. They were popular even before they released their first album. This became obvious after the band announced a head-liner show at The Palace, a respected venue now known as The Avalon, located in Los Angeles. The band had nothing set-in-stone, not even a record, but they sold out the venue. Schwartzman said the Palace was similar to the High Dive, a venue on 210 SW Avenue in Gainesville.

In the early 2000s, Rooney signed with Interscope Records and worked in the studio, night after night, to finish their second album. The instant success of songs like “Blueside” and “I’m Shakin’” on the first album was exhilarating, but only put more pressure on the lead singer and primary writer to create additional top hits.

At the time, Schwartzman said, Rooney didn’ t fit into a specific genre, which meant there was no distinct route to follow. Perhaps had they been metal rockers or teen poppers, success would have been easy.

“In the label’s perspective, we never had the mega No. 1 smash song that they bet all of the money on, so we kind of had to prove to people that we were a band worth taking notice of,” Schwartzman said.

As a result, Rooney was encouraged to follow a more pop-based route. Being young and relatively new to the industry, they gave it a try, but it never felt natural. When they started to write music to mainly satisfy a mainstream audience, Schwartzman said their music lost integrity, a trait he wasn’t willing to give up.

In 2010, Rooney called it quits, putting an end to the band Schwartzman started with his high school friends. Schwartzman ventured off into other projects. He worked on films such as Palo Alto and sprung into a solo career; he released a record called Double Capricorn in 2011 and released an EP under the name of STARSYSTEM in 2013. But his break from Rooney didn’t last long.

On concert night in Gainesville, crowds of people strive through the entrance —some older and others looking as though they might have still brought Danimals to school. Bassist Sean Sobash and keyboarist Kim Vi, joke around and work on their bicep definition with resistance bands, an act that will later be appreciated by screaming girls in the audience. 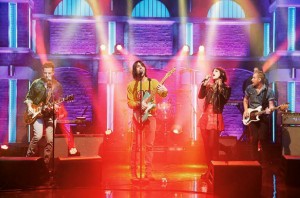 The band performing on Late Night with Seth Meyers alongside their musical guest, Soko.

“That was part of the appeal to these guys,” Schwartzman jokes. “They all pump iron.”

In the beginning of 2016, Schwartzman returned to his “high school sweetheart,” Rooney. He realized the band was too important to walk away for good. But instead of gathering up all his old bandmates for a reunion, he decided to wipe the slate clean, and brought on fresh Rooney members Sobash and Vi, as well as lead guitarist Boaz Roberts and drummer Tyler Johnson. Though recently formed, it is clear that the new band’s chemistry is uncanny, as they joke about Tinder dates and munch on vegetables and hummus, pre-show.

While fans might be confused as to why Schwartzman chose all new members, he says it’s a decision he is confident about. It’s all with the intention of growth and new opportunity for Rooney, outcomes he doesn’t know would be possible with the history of old bandmates. Schwartzman would “rather not try to force something that might not happen naturally,” especially when the addition of new bandmates makes room for a fresh perspective.

“I’m (now) playing with people who are forming a new identity with me,” Schwartzman said. “There’s no old baggage from childhood or growing up together.”

And in creating this “new identity,” Schwartzman sees the band as an opportunity for reinvention, a way to “do” Rooney differently this time around.

Inside Gainesville’s High Dive on a recent night in October, a young woman can’t stop shaking; she sways her hips from left to right and pokes her hands in the air. Rooney fans know how to move.

Schwartzman recognizes this as he extends his hands into the crowd. A few fingers meet his, and in what feels like a moment, hundreds of hands and thousands of fingers are in the air, following every beat of the music. The energy is electric, and you can almost feel it through you. It’s the rush you feel at the climax of a ride at an amusement park, past the stomach drop and into a feeling of freedom.

And after 18 years, the band Rooney is finally reaching its freedom.

“Back then I really didn’t know what I was doing,” Schwartzman said.

Now, a seasoned musician, Schwartzman knows the role he wants to play in this business. As a “career artist,” he’s looking to define the band’s life beyond a few popular singles. To him, this means that “you’re not just here to have a hit song and be cute and be on the cover of a magazine.” You’ll do the work to produce consistent songs that sound and feel authentic, something that was once a struggle for him.

“A lot of people struggle in music, in art and just in life,” Schwartzman said. “But we’ve been really lucky to achieve the things we’ve achieved.”

Schwartzman knows the band’s success would not have been possible without its devoted fans. From the early 2000s to present day, the loyalty and support hasn’t gone unnoticed, and he’s excited to share the band’s comeback with the people who’ve been around since the beginning. But he also wants people to know that he isn’t doing this to relive his high school days. Schwartzman’s decided to go back to Rooney because he believes “it’s a good band, and it’s good music,” and he hopes old and new fans will recognize Rooney in the same way.“I just want people to embrace it as they would anything, not for nostalgia, but because they really like the music,” Schwartzman said.