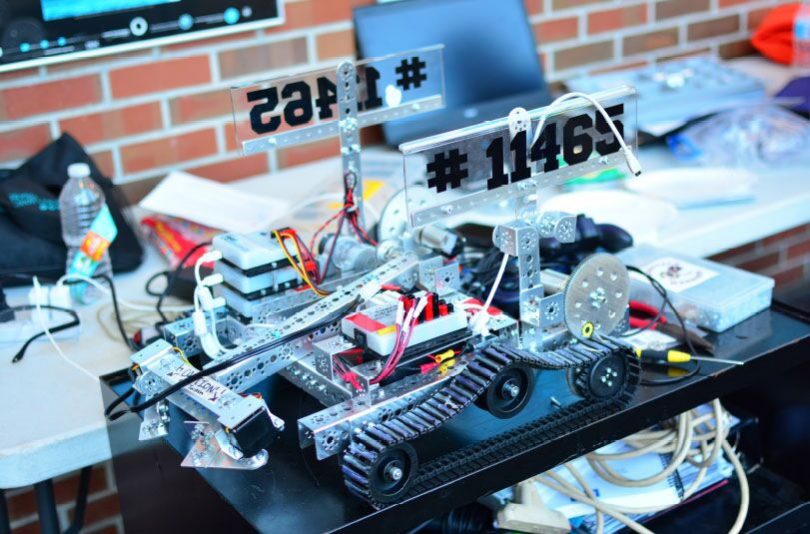 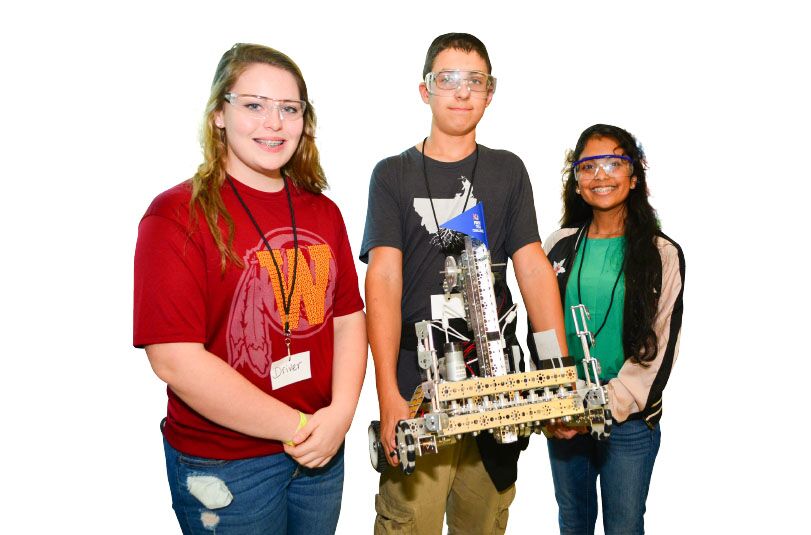 It’s 8 a.m. on a Saturday, and dozens of teenagers have willingly crowded into a building dedicated entirely to physics. They hunch over laptops and type away at endless lines of code; they retighten tiny screws for the 100th time that morning; they chat among themselves with an unfamiliar energy. It’s an unusual phenomenon, with an even more unusual cause: a passion for robots. Each and every person who crowded into the University of Florida physics building on November 4 had a connection to robots. More specifically, robots that are designed, built, driven, and programmed by middle school and high school students.

Through a program called FIRST (For Inspiration and Recognition of Science and Technology), over 460,000 K-12 students compete annually in teams with robots that are designed and built to perform specific tasks that vary each year. On November 4, 2017, UF hosted its very own FIRST event, opening its doors to teams from across North Florida for a day of competition and fun. The event was specifically a FTC (FIRST Tech Challenge) competition. FTC is a branch of FIRST for students in grades seven through 12 whose robots are built to fit within an 18-inch cube.

The day started early for all those involved, especially for the volunteers. Many of them traveled from Jacksonville for a 7:30 a.m. arrival to spend their free time doing everything from refereeing matches to manning concession booths. It’s not uncommon for FIRST volunteers to be so passionate about what they do; in 2016-2017 alone, volunteers donated over 17 million hours worldwide. Many volunteers are FIRST alumni and have seen and experienced firsthand the difference FIRST can make on students’ lives. They want to give back, and many also enjoy the opportunity to remain part of the community and experience that is FIRST.

In the time before matches start, competitors can be found getting ready at their team tables, driving on the practice field, and conversing and sharing ideas with other teams. FIRST prides itself on Gracious Professionalism, a term that is used to promote friendly, respectful, and constructive competition, highlighting the importance of sharing ideas and helping others. Everyone involved in FIRST takes Gracious Professionalism to heart, and it can be seen everywhere at any given event.

For example, it’s not uncommon for more experienced teams to spend hours with rookie or struggling teams, helping them compete by providing advice, lending spare parts or just giving general support. Competitors treat each other with respect and consider each other as equals. Gracious professionalism is evident in every exchange of smiles and handshakes after each match and in the excitement that brews with each newfound idea shared by a peer. The heart of FIRST, and what makes it special, is the moment-to-moment interactions of competitors, volunteers and spectators alike.

Before teams can participate on competition day, all robots must go through a series of inspections to make sure they will function on the field and to ensure that their design and build do not violate any rules. If a team fails inspection, other teams, volunteers and coaches will step in to help the struggling team get its robot working. After inspections and a quick overview of rules, matches begin! 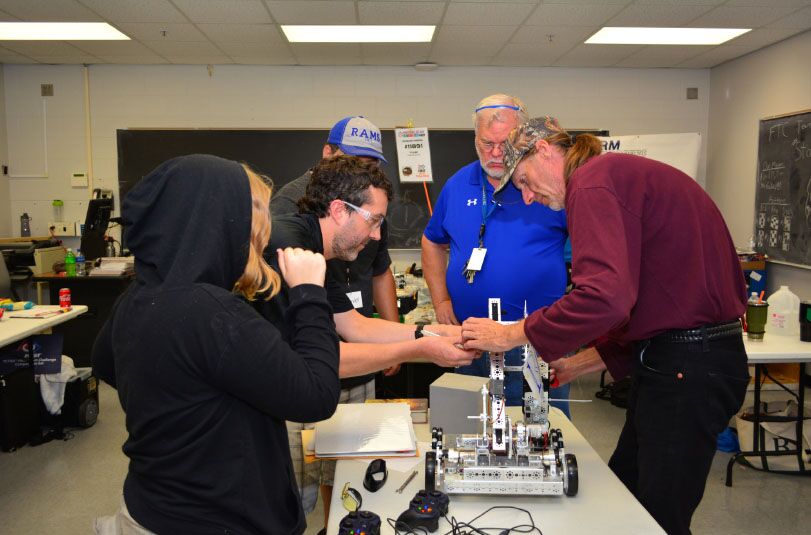 Matches take place on a 12-by-12-foot foam-tiled floor, surrounded by 1-foot-high walls. FTC’s challenge for the 2017-2018 season is called “Relic Recovery.” The goal of the game is to score the most points for your “alliance,” which consists of two teams paired together on either the “red” or “blue” side. There are many ways to score points, and there are three different phases to each match in which teams can score.

The first phase is the 30-second Autonomous period in which everything the robot does is pre-programmed — no manual driving is allowed. In Relic Recovery, robots earn points by parking in designated areas, stacking foam blocks (called glyphs) on a specific part of the field, and knocking colored balls off stands. For the drivers, it’s 30 seconds of hoping and praying that everything goes right, because once it starts no one can touch anything within the field until the match is finished. While robots race around on their own, doing as programmed, drivers watch nervously, itching to regain control over their robot.

Soon, that wish is granted. The next phase is the Driver Control period, where two drivers typically control the robot with gaming controllers, and a designated drive coach advises them. In this phase, scoring is focused on stacking glyphs into a box, known as the crypto box. All strategic decisions and dealing with any issues that may arise are made on the fly by the drivers. It can be a high-stress situation for the drivers in the moment, but everyone involved with FIRST knows that having a good time and being there for their peers is above all else. 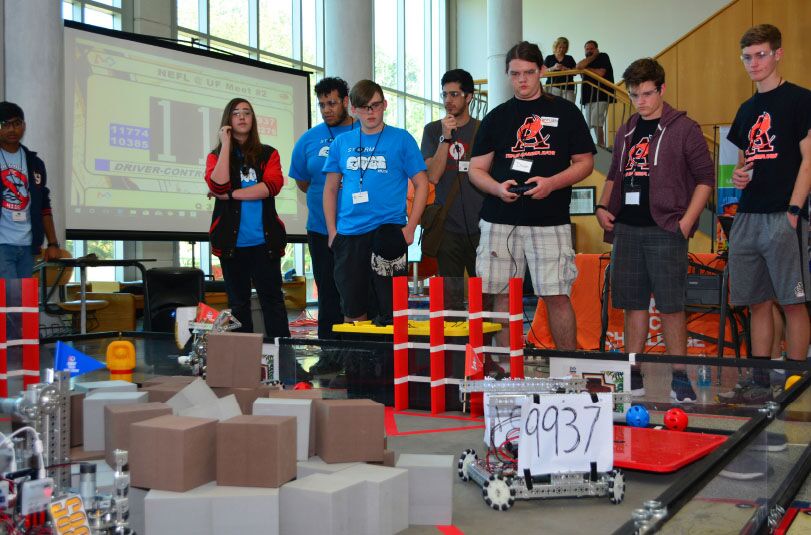 End Game is the final phase, which occurs in the last 30 seconds of the driver controlled period. Its defining feature is that it includes a new way to score points. In End Game, along with glyph scoring, teams can score points by placing a yellow plastic figurine, known as a relic, outside the field and over the wall. Teams can only score relics in the last 30 seconds of the game, unless they have filled their crypto box with 12 glyphs in a specific pattern, known as a cypher. If a cypher is completed before End Game, that team can go straight to relic scoring.

In preparation for the competition, each team comes up with their own design that they believe could earn them the most points in this year’s challenge. At competitions, one of the things that teams look forward to the most is seeing other people’s ideas.

Experiencing the diversity of people and ideas that FIRST offers is a priceless opportunity for students, and most importantly is fulfilling and fun. Through teamwork, inter-team cooperation, and dynamic competition, participants learn and collaborate in a fun and encouraging platform. FIRST is a haven for all future innovators of STEM (science, technology, engineering, and mathematics) and beyond. 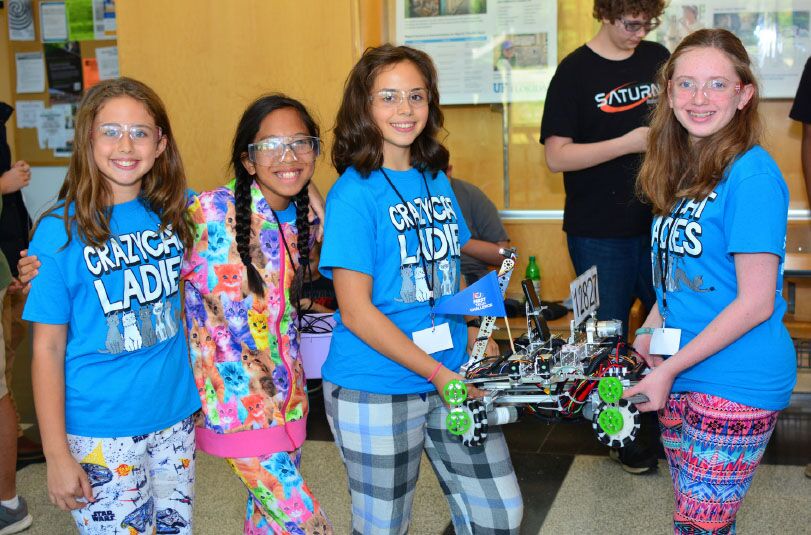 Madelyn Walker is 15-year-old home-schooled student in 10th grade. She has been a part of the Gainesville FTC team “The Swampbots” for two years and is very passionate about writing. She is looking to pursue creative writing as a career when she is an adult. When not writing or messing with robots, she can be found riding horses, reading or playing guitar.