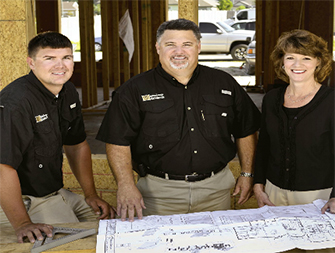 “I can’t step out my front door without bumping into someone who knew my father and is happy to chat about their memories of him. Those little daily reminders keep me focused on leaving the kind of positive impact in our community that he did,” Scott said. I’m very proud to carry on that kind of tradition.”The value of building trust through customer service is more than a cliché for Jason Robinson; it’s part of his DNA.The DNA he inherited from his grandfather, Elwyn Robinson, that is. The elder Robinson, who founded Quality Builders with his partner, Harold Walker, in 1958, left a lasting impression on customers — and some of them still pay tribute to him when talking with Jason today.“It helps me realize that showing respect and working with honesty and integrity leaves a lasting impression,” Jason said.The bridge between Elwyn, who died in 2011, and Jason has been Scott Robinson, Elwyn’s son and Jason’s father who is president of Robinson Renovation and Custom Homes.When he was in grade school, Scott would hang out with his friends at the Quality Builders’ office on NW 34th Street.“We would use scrap lumber to build tree forts,” he said. “From the time I was eight or nine, I knew I wanted to be a builder with my father and take over the company. I never had any thoughts of doing anything else.”When he was 12, Robinson joined a paint crew over the summer.“I loved the process of building, and I began to study books on construction and architecture,” he said.Scott was in a hurry to work independently, so when he was 15, his father offered him the opportunity to take responsibility for roofing some houses.Scott formed his own roofing company, without the need to incorporate or obtain the permits that are required today. During the school year, he was enrolled in the Diversified Cooperative Training program at Buchholz High School, which allowed students to hold jobs during part of the school day.“I would get a crew started at seven in the morning, and then I would come back at noon,” he said. “Mrs. Dianne Lauramoore, the DCT instructor, frowned on me grading myself. So, I got my father to grade me. He usually gave me A’s and B’s.”Robinson exemplified the goal of the program: to teach business skills in a real-life setting, Lauramoore said.“Scott was always very pleasant, and he had a good work ethic,” she said. “He embraced entrepreneurship, and he had a passion to keep going.”Robinson Renovation also serves the community through its work for nonprofits, including the Child Advocacy Center and the PACE Center for Girls.CAC President and CEO Sherry Kitchens said she appreciated the company’s help in creating a conference and interview room in the organization’s new office in 2008 after its previous office flooded.“We’re grateful that they donated their time, materials and labor,” she said. “They were so professional and finished the job quickly and sensitively to get us up and running with very little downtime.”The company is also active in the Builders Association of North Central Florida. Elwyn Robinson served as the organization’s president in 1970, and Scott’s brother, Tom (owner of Robinshore Inc.), followed in 1987.Scott then became BANCF president in 1997. “(That) was a milestone,” he said. “It is one of the goals I set years ago — to follow in my father’s footsteps in (the) position.”Jason is a member of the BANCF board, and he hopes to head the organization one day. “It’s a great organization,” he said. “Members are able to put their personal business aside and work for the greater good of the building industry.”Another member of the Robinson Renovation team is Scott’s wife, Wanda. Wanda serves as the executive vice president, managing the accounting functions of the company.Scott and Wanda have one child of their own, Jared, who is in high school. The family also includes Scott’s son, Jordan, who is an Army sergeant.The Robinsons are active in Trinity United Methodist Church, and they have helped with many of the organization’s building and remodeling projects.As the Robinson family serves the community, the approach of Elwyn Robinson endures.