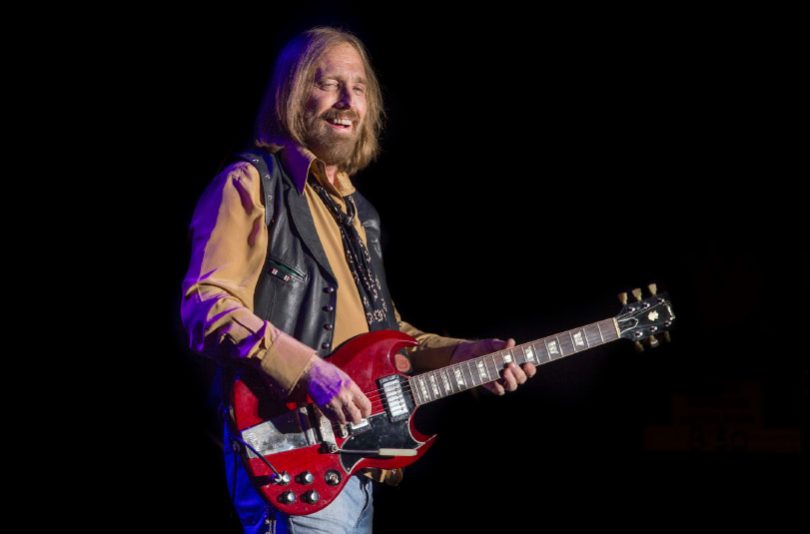 Tom Petty. I’m still stunned. And sad – like I lost a family member. Tom Petty and the Heartbreakers is the greatest American band of my lifetime and Gainesville’s finest export. I can’t seem to go 10 minutes without one of their countless perfect songs rolling through my head – even when I’m recording in the studio in Nashville or while I’m on stage.

In my opinion, they have the greatest body of work of any artist in the last 40 years. That includes Tom’s solo material. Their work, without a question, is my favorite.

Petty had an uncanny ability to write beautifully simple songs, which were still astoundingly complex. He was a true southern poet. I’d venture to say that he may have written a couple dozen perfect songs that transcend time and place. Every note and every lyric – perfection. Most artists never write one.

For somewhat obvious reasons, I have a deep and unique connection to Petty and his music. He paved the way for a local Gainesville kid like me. He proved that our small town in North Central Florida had stories to tell, and if you could craft and deliver them well enough, the whole world would listen. He left a huge mark on the musical landscape of the world, and because of him I’ve been fortunate enough to leave a paper cut.

Stan Lynch was the original Heartbreaker’s drummer for the first 20 years. His father, Stan Lynch Sr., had an office at Santa Fe College right next to my mom’s for many years. My father also worked with Stan’s mother, Sally, before I was born. So, my house was always aware of what was going on during Tom Petty and the Heartbreakers’ early years and what was happening on their ride.

In 1980, I’ll never forget my mom telling me, “Stan and Tom and the boys are going to be on The American Top 40 Countdown today. You should tune in.”

With nervous anticipation, my little brother Jeffrey and I huddled next to our bedroom’s clock radio at our Crescent Beach place and listened in awe as Casey Kasem talked about our Gainesville boys before playing “Refugee” for the whole country to hear.

Hearing “Refugee” on that radio show was a huge moment for me. It was my “Beatles on the Ed Sullivan Show” moment. I was 13 years old, already writing songs, already in a band and already starting to play. It proved to me that a singer and
his bandmates from little, old Alachua County could impact the world with their music. And I wanted to do that. To make people think and feel and move, just like that.

Little did I know that one day I would grow up to work with Stan Lynch as a writer and producer, and that I would hear Casey Kasem talk about my band several times over the years when Sister Hazel had a few songs hit the top 40.

Petty’s music spoke to me, and it spoke for me. It was blasting at every party I ever went to growing up. Every road trip. It was a part of every hookup and every breakup. In my head, I was the guy he was singing about, and I pictured myself as the guy who was onstage singing those songs.

I swore I was the guy in “Even the Losers” the night that senior girl kissed me, only a sophomore, by the bonfire in the abandoned neighborhood on Millhopper Road. I wore out “Woman in Love” when I asked a girl I really liked to prom and she told me she was going with one of my best friends. I grew up and still live in the “One Story Town” he sings about on the “Long after Dark” album. And, don’t get me Started on “The Waiting,” “Southern Accents,” “Rebels,” “Wildflowers,” or “Listen to Her Heart.”

My wife, Tracy, adored Tom Petty. She and I went to his Tampa show a couple of years ago. We sang along to every song all night long, and we had a blast!

I always loved that he played music that blurred the lines between rock, country, pop, folk and blues. Does that sound familiar? He taught me that you can do that! That’s Gainesville music.

And I loved that he looked just as cool playing his own brand of music onstage at 64 as he did at 25.

Earlier this week, I dropped my kids off at Gainesville High School, the same high school where Petty roamed the halls as a restless awkward musician and distracted student. Then I pulled out of the parking lot and turned onto 441, the road immortalized in his song “American Girl.” Of course, we call it 13th Street.

Dub’s used to be on 13th Street, the same infamous venue where we both played when we were kids – albeit a few years apart. We both learned how to be pros there and how to power up our live shows and fine-tune our frontman skills.They had $1 Jack Daniel’s and staged their famous miniskirt contests between our third and fourth set every Thursday night.

We roamed the same streets, played the same bars and even threw a few parties of our own out in the woods, on somebody’s farm or at the old American Legion Hall. We swam in the same lakes and in the same springs and skipped school to go to Crescent Beach.

I bought my first electric guitar from Buster Lipham at Lipham’s music store where Petty had worked and learned some piano and guitar from (future Eagle) Don Felder. And I, like Petty, didn’t start out as the lead singer in my first band either.

Drew wrote a line in our song “Something to Believe In” that says, “Just a kid from Gainesville watching Petty – with my lighter in the dark.” That was us, in the O’Connell Center during the early ‘80s, watching his triumphant return home
after conquering the world. They were amazing. Every song.

I so badly wanted to be able to make people feel the way that they made people feel from the stage that night! Tom Petty and the Heartbreakers were the iconic local kids who beat the odds and found themselves on top of the musical world, for four decades.

I can’t really remember life without him. He, without question, shaped who I am as an artist. I’m going to miss knowing he’s out there making Gainesville proud.

For now – I think I’ll just be sad for a while. And I’ll keep rolling those songs around in my head and singing them under my breath. Or maybe I’ll sing ‘em just loud enough in public to embarrass my kids.

Thanks Tom. Sincerely, deeply and from the bottom of my heart. Thanks.