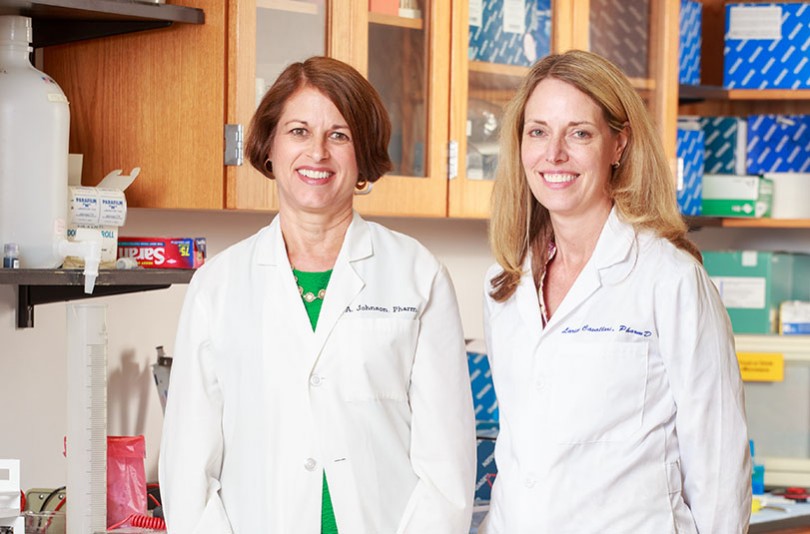 In 2015, President Obama announced a new Precision Medicine Initiative to use information about genotype to better understand and treat disease. UF Health is a global leader in precision medicine, using genetic information in prescribing drugs – both by choosing medications most likely to be effective and avoiding medications likely to be harmful based on a patient’s genetic profile.

The UF Health Personalized Medicine Program is part of the UF Clinical and Translational Science Institute.  The program is one of six sites funded by the National Institute of Health’s National Human Genome Research Institute’s Implementing Genomics in Practice, or IGNITE, network. The other funded network sites are Duke University, Mount Sinai Health System, Vanderbilt University, the University of Maryland, and Indiana University. The goal of the network is to move genetic testing into clinical practice.

UF College of Pharmacy Dean Julie Johnson is the Director the UF Health Personalized Medicine Program, and the principal investigator of the grant funded by the National Institutes of Health.

Another leader of the program is Larisa Cavallari, the director UF’s Center for Pharmacogenomics. She discussed the program with Home.

Can you review the evolution of genetic testing?

Interest in this topic grew when the initial draft of the Human Genome Project was completed in 2001 – more than a decade ago.

Now we can sequence someone’s genome in less than a day for about $1,000. The price has really come down; there are so much faster platforms than before. The technology has in many ways surpassed the movement into clinical care.

Part of the UF Personalized Medicine Program is focused on Plavix, a medication that helps prevent blood clots after coronary angioplasty. Why?

There is strong, consistent evidence that certain variations in a person’s genetic makeup inhibit them from being able to make the active form of the drug. Plavix is not active, so when you swallow the pill, your body has to convert it to the active form.

About 30 percent of people either don’t produce the enzyme that converts the drug or have a decreased amount of enzyme. There is one gene that can be the reason that people aren’t responding.

Patients who get coronary angioplasty and stents are the ones who are at highest risk for whom the genotype matters the most. Angioplasty is a procedure to open clogged heart arteries, and a stent helps keep the artery open. Plavix is used to keep a clot from forming in the stent.

If you get a clot in the stent, it can lead to death, a heart attack or a stroke.

There are effective alternative drugs for people who cannot activate Plavix. So we asked, “Why don’t we start genotyping people who undergo angioplasty and stenting?” We wanted to predict upfront whether the drug would work so we could prescribe a different drug if needed.

We’re working with eight other institutions who all are implementing this into practice – doing the genotyping for Plavix. We’re all putting our data together to see if switching to a different drug for patients who are not expected to respond to Plavix leads to improved outcomes.

In working with 400 patients at UF who were not expected to respond to Plavix, we’ve shown that it does work. Now the study group is looking at a larger population of about 4,000 patients across the U.S.

We know that the alternative drugs are better than Plavix in some ways, but they’re much more expensive, so not everybody can afford them. They also create a higher risk for bleeding. For about 70 percent of people who have normal amounts of the enzyme that activates Plavix, the drug should work just fine.

Who are you treating?

It’s for people who undergo angioplasty and stenting, which opens up a clogged artery and involves placement of a stent or tube-shaped device to hold the vessel open. Plavix is to keep a clot from forming in the stent.

If you get a clot in the stent, it can lead to death, a heart attack or a stroke. The patients who get angioplasty and stents are the ones who are at a high risk and for whom the genotyping matters the most.

What other work is going on at UF?

We also test an enzyme that breaks down drugs called thiopurines, like mercaptopurine and Imuran. They are used to treat some childhood cancers and some gastro-intestinal disorders. We can genotype this enzyme, and it helps determine the right dose of the drug to use.

About 10 percent of the population has a deficiency in the enzyme that breaks down the drug, and they need a lower dose. Otherwise they could get a toxic effect from the drug.

What research is UF doing with pain medication?

We heard from our physicians, mostly in primary care, that they wanted to do genetic testing on  patients who were taking opioids, like codeine. They have patients for whom opioids didn’t seem to be working.

Codeine, very much like Plavix, has to be activated. Codeine is converted to morphine. There’s a gene that inhibits the production of the enzyme that converts codeine to morphine; either completely stopping production or producing in small quantities. The physicians wanted to start testing for this so they could see if it explained why their patients weren’t responding.

The test is available clinically at UF Health. We are also doing a study to see how getting genotype information can help with pain management. As part of the study, patients are genotyped, and physicians change the drug as needed based on the genotype information. The patients do surveys at baseline and three months to see how well their pain is controlled. We’re looking to see if this genotype-guided approach to managing pain improves pain relief.

What is UF doing to make genotype testing available to more patients?

We are looking to offer testing to help with other medications, such as proton pump inhibitors that are used to treat stomach problems like gastroesophageal reflux disease.

There’s also interest from consumers in getting testing using a panel-based approach. This means that many different genotypes would be tested at once. These genotypes could be used to help with many different medications that patient might be prescribed.

We don’t know when is the best time to do genotyping with a panel. Should it be when somebody is completely healthy, so they have this information if they ever need a drug that is affected by genotype? Or should it be when someone has already started to develop a disease?

We definitely heard that people want this, and we’re trying to make it happen.