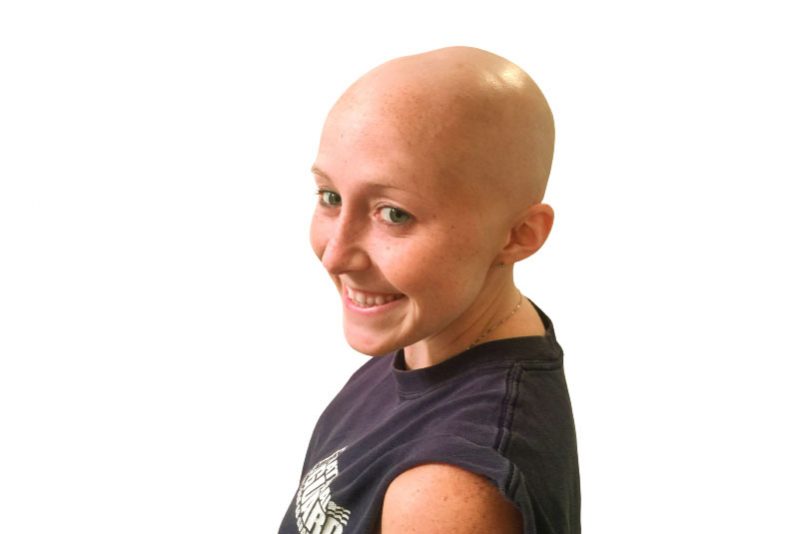 The night before Jessica Ayers was diagnosed with breast cancer at the age of 29, she prayed: “Please, God, let this be it.” And it was. Jessica was about to start a journey of courage, strength and acceptance.

“She didn’t feel good, and she really couldn’t explain it — any of the tests they did were inconclusive,” said Jessica’s mother, Star Ayers.

Going into the doctor’s office the morning of her diagnosis, Jessica prepared herself: “You know you probably have breast cancer.”

She was too young for a mammogram, and her insurance would only cover an ultrasound of the lump. The doctors carried out a routine ultrasound and said she was fine.

“No, you need to redo that ultrasound,” Jessica insisted.

After changing the scope, they saw spots on her right breast and immediately ordered a mammogram. Typical symptoms of breast cancer include a lump in the breast or armpit, skin changes, nipple discharge and sometimes pain. The majority of breast cancers are asymptomatic and detected through routine mammography, said Dr. Regan Rostorfer, Jessica’s oncologist at the Orlando Health University of Florida Health Cancer Center.

“That day, they told me they don’t normally diagnose breast cancer without a biopsy, but (they said), ‘Yours is so advanced that we can tell you right now that you have breast cancer,’” Jessica remembered.

Jessica was diagnosed with advanced invasive ductal carcinoma with lobular features in December of 2015. Ductal Carcinoma is the most common type of breast cancer and accounts for 80 percent of all breast cancers. This means the cancer began in the milk ducts where breast milk is carried to the nipple, and the tissue surrounding her breast was invaded. 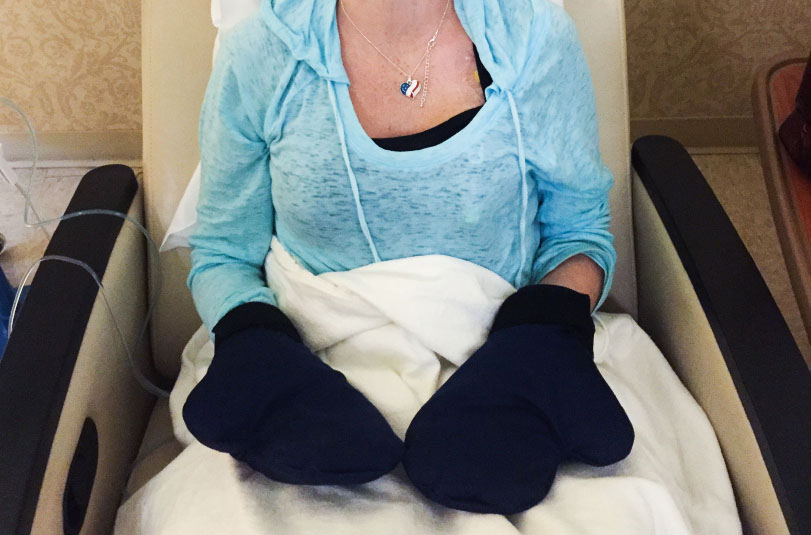 Jessica Ayers sleeps after one of her chemo treatments in Orlando.

The risk for the average woman to develop breast cancer in her lifetime is approximately 12 percent. In 2015, approximately 231,840 people were diagnosed, according to the American Cancer Society.

“I had been sick for a really long time, and I didn’t know why,” Jessica said. “I was so tired of going to doctors — nobody could figure out what was wrong, and we finally had an answer, and I could start feeling good again … It is what it is. I have it. What do I do now?”

First, she had to tell her family. Gathering her mother, her brother, her boyfriend and his two kids, the family met at their lake house, where breaking the life-changing news would be comforting.

“I wanted to tell everybody that day — I wanted it to be over, and I wanted everyone to feel supported,” she said.

Ayers was honored by Ford Motors as one of their Warriors in Pink and was honored in Detroit. 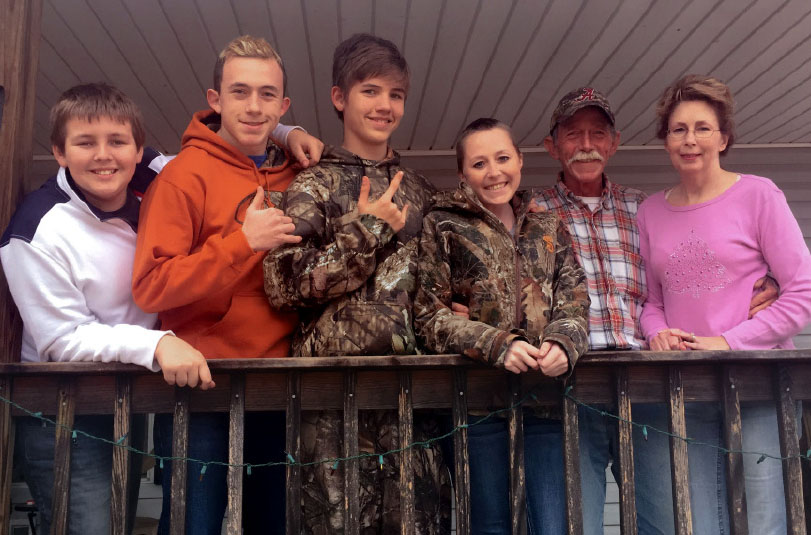 Ayers gathers with her family in Georgia after her diagnosis.

With two large masses that measured 9 centimeters total, her road to recovery would be a long and difficult one. During Christmastime of 2015, Jessica thought she was going to die.

“I thought that Christmas was going to be my last Christmas,” Jessica said. “So, I went up and had my whole family go to Georgia because I really thought that this was it.”

Getting her family together for what she thought may be the last time was emotional. As they spent the holiday at her dad’s home in Georgia, Jessica came back with a fight in her soul that would give her another Christmas.

“God has a reason,” Jessica said. “He wanted me to have this, so I’m going to make the most of it.”

With the pressure of constant doctors visits and chemotherapy appointments, the side effects of cancer, and trying to continue to be a positive, happy young woman, Jessica had to let go of the reins and let her family help her.

“Just accept the help; you need it right now. These people love you, and they want to do what they can,” Jessica told herself. “It’s hard for your loved ones to watch you go through something like this because there’s nothing they can do.”

Following a double mastectomy, Jessica started to lose her long, blonde hair. Like a dog shedding its summer coat, as Jessica described it, it started out slow but soon fell out quickly.

“It didn’t really freak me out because I knew it was going to happen,” she said. “I don’t think I realized that it would fall out that quickly, but I had a lot of warning from my girlfriends who had gone through chemo that it would. After my second chemo, I remember laying in bed, feeling like crap, and I said to (my boyfriend), ‘Babe, I am going to bald soon,’ and the next day, the clumps started happening.”

She decided to get rid of her hair before cancer could and experimented with different hairstyles, from a bob to a mohawk to a buzz cut. Jessica took one of cancer’s side effects and turned it into a memory that didn’t sound like tears or the buzz of a razor; instead, it reminds her of her strength and fight.

Faced with 16 chemotherapy treatments at Orlando Health, Jessica was put on the “red devil,” a treatment once a week every two weeks. An electrical outlet-like port was put in her chest, where the chemo would pump through her body.

“Chemo is really, really hard,” Jessica said. “You can feel it pulsing through you.”

Constantly by her side, Jessica’s mother put gas in the car and stocked up on health drinks and snacks for Jessica. Together, they would make the drive to Orlando for her treatment.

“We had rituals to get us through the chemo days,” Star said. “The first few trips, she was chatty on the way down. By the 16th chemo treatment, Jess was really quiet. She was tired and didn’t want to do it anymore. I bought a birthday bag before she started chemo, and on it, I wrote the numbers one through 16. She had 16 treatments, so each week she covered a number counting down to the end. Jess would be done by her birthday in September.”

Jessica spent a lot of her time resting in bed after chemo treatments, so she began adding words and notes of inspiration to the wall across from her bed. As she looked across her room to the poster her dad made with the mantra “Strong, stronger, you are the strongest,” she kept her spirits up and her outlook positive.

Other notes from friends and family as well as some of her favorite bible verses kept her going. Reading them over and over again, she told herself, “You got this.”

“You have to keep faith,” Star said. “It gets you through it.”

Leaning on her support system, Jessica found an outlet that would help not only her own journey through cancer but also the journeys of so many others. After she started posting about her experiences on her blog and her Facebook page, others reached out to tell her that she was helping them through their personal battles with cancer and other illnesses.

“We all have to go through the same feelings,” Jessica said. “For some women, they say they feel bad about themselves, but I just try to embrace it — your hair is going to fall out; you’re going to look different. But, you’re always beautiful, and your beauty comes from the inside and not the outside. Things will change, but it will get back to normal. Your eyebrows and eyelashes will grow back (and) you can get reconstructive surgery, but at least you made it.”

Taking preventative measures into your own hands can be a lifesaving action. While there are different viewpoints about when screening should start, women should be counseled about routine mammograms and breast self-examinations, according to Rostorfer.

Cancer doesn’t wait until the age of 40 or 60. Like Jessica, anyone any age can be diagnosed with a disease that can change a life.

“If you know something is wrong, be an advocate for yourself, stick with it, and don’t let anyone push you around or tell you that you’re too young because no one is too young for anything,” Jessica said.

As of August 2017, Jessica’s journey with cancer isn’t over. Reconstructive surgery, doctors’ visits and hospitals will continue to be a part of her routine. But, cancer taught Jessica that life is too short to deal with negativity. With her loved ones surrounding her and keeping her strong, Jessica knows cancer can fight its hardest, but she’s fighting just as hard.

“It’s good to have my vibrant, energetic Jess back,” Star said. “I have to admit though, she had a beautiful bald head, and she wore it with grace — her badge of courage.”

“For some women, they say they feel bad about themselves, but I just try to embrace it — your hair is going to fall out; you’re going to look different. But, you’re always beautiful, and your beauty comes from the inside and not the outside. Your eyebrows and eyelashes will grow back (and) you can get reconstructive surgery, but at least you made it.”

For more about Jessica’s journey, see her blog at jessthrubc.wordpress.com