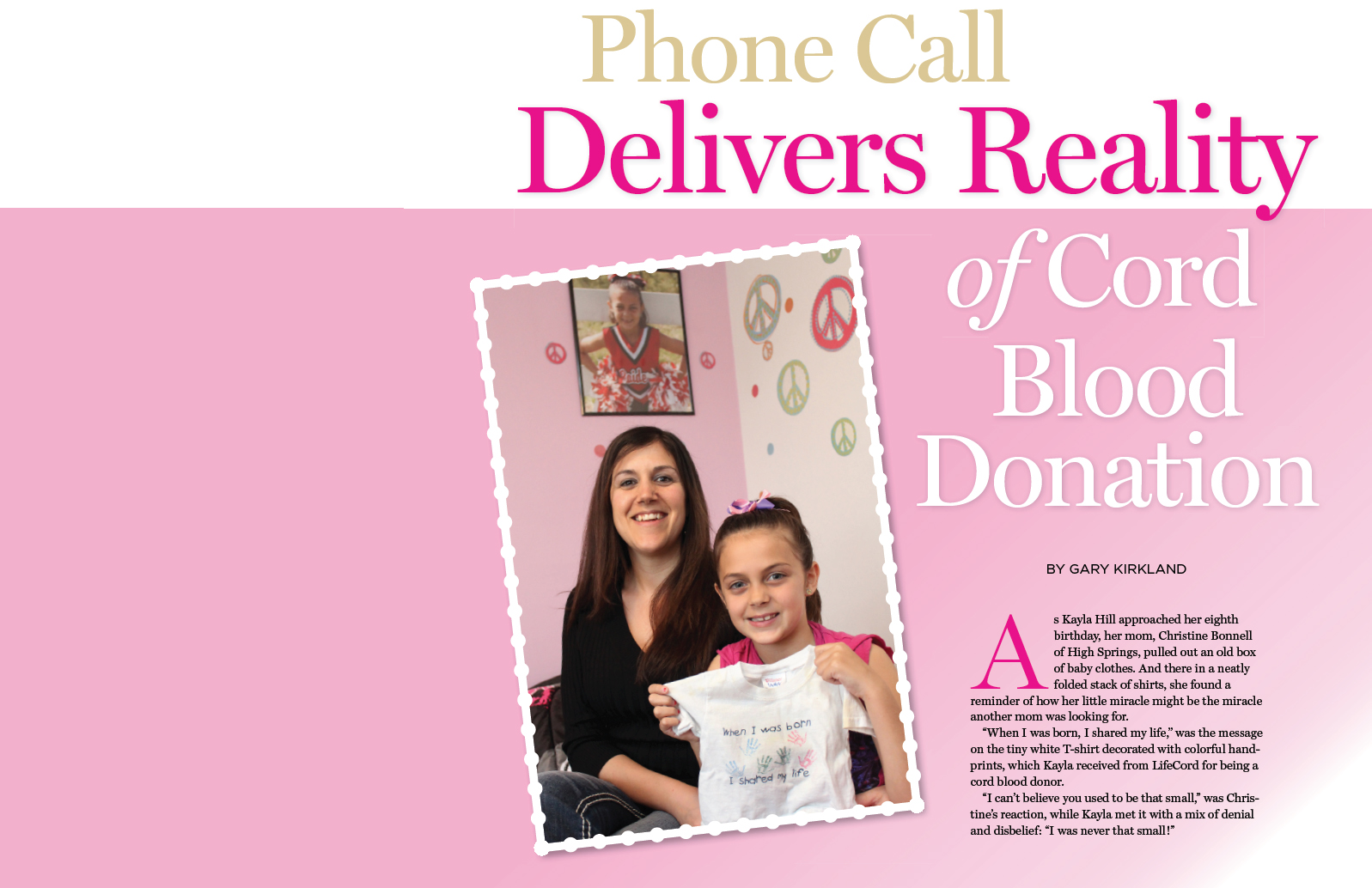 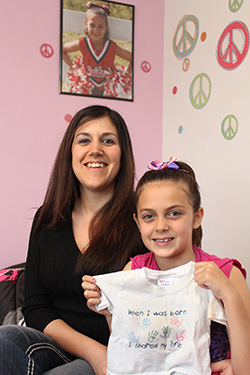 As Kayla Hill approached her eighth birthday, her mom, Christine Bonnell of High Springs, pulled out an old box of baby clothes. And there in a neatly folded stack of shirts, she found a reminder of how her little miracle might be the miracle another mom was looking for.

“When I was born, I shared my life,” was the message on the tiny white T-shirt decorated with colorful handprints, which Kayla received from LifeCord for being a cord blood donor.

“I can’t believe you used to be that small,” was Christine’s reaction, while Kayla met it with a mix of denial and disbelief: “I was never that small!”

Christine recalled that her doctor had first mentioned, “It might be something you’d want to look into” and gave her a pamphlet on cord blood donation to read. She said she had heard of it but didn’t know much about it; however, when she checked into the hospital and was asked if she’d like to donate, she was happy to help — even if she wasn’t sure about the process yet.

A phone call a few days later confirmed that LifeCord was able to preserve the cord, but until she sorted through the box of keepsakes, Christine hadn’t thought much about it. Then came another phone call just before Kayla’s birthday celebration. LifeCord was checking back in — Kayla’s cord was a match for a patient in need of a marrow transplant. The gift Kayla made when she was just minutes old would soon be giving a patient with non-Hodgkin’s lymphoma a second chance at life.

“Wow!” was Kayla’s reaction, and she quickly shared the news with her second grade classmates at High Springs Community School.

“It’s amazing something so small could save someone’s life,” Christine said. “I was so excited I started telling everybody at work.”

It’s a story that’s happening more and more often — LifeCord alone has helped patients in 27 states and 11 foreign countries. In 2013, the Be the Match Registry, which helps match cord blood donations with patients in need, facilitated more than 1,100 cord blood transplants, and 43 percent of those took more than one cord blood unit.

Matches are based on genetics, and patients are most likely to match a donor of their own race or ethnic background. While there is a shortage of minority donors, the special properties of cord blood help to close the gap. In 2013, 31 percent of the cord blood transplants went to minority patients.

“Getting more donors and getting a greater ethnic diversity from those who donate will mean even more lives are saved in the future,” said LifeCord Director Yesi B. Sevilla. “Our LifeCord babies are saving lives all over the world.”

And for Christine, that phone call brought home the real impact of the gift that was so simple to give. The news she was so eager to share with her coworkers meant that a mother or loved one who had been hoping for the miracle of a match had found one.

“I can’t imagine how that felt,” she said. “Nothing’s better than giving the gift of life.”