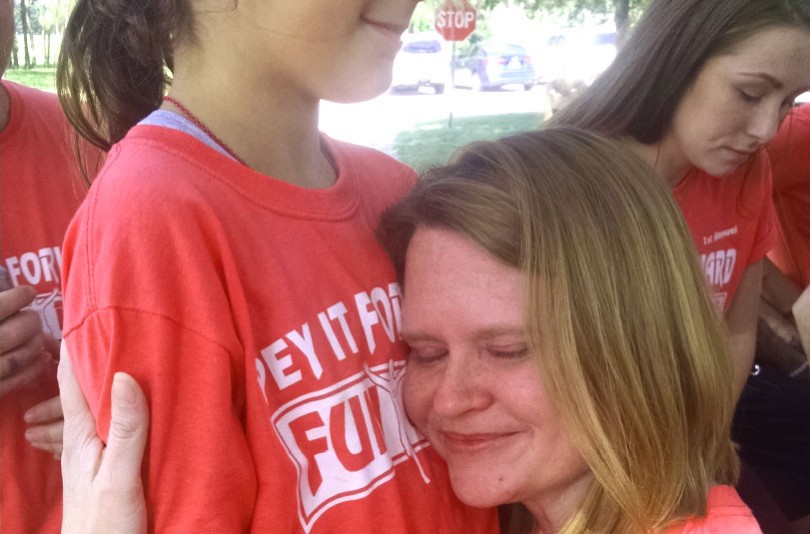 Amy Whittemore has a special bond with Bailey Baldwin. The bond started when Bailey received the transplanted heart of Amy’s daughter, Peyton, after the vibrant 15-year-old was stricken with a fatal rupture of a blood vessel in her brain. The bond became stronger when Amy met Bailey, who lives in Blackshear, Georgia. “When I hugged Bailey and felt Peyton’s heart beating in her, I had a feeling I can’t explain,” she said.

Peyton’s legacy also includes the donation of both of her kidneys and her liver. “It’s very healing that Peyton saved these lives,” she said. “It’s what keeps our family going.” This sense of satisfaction is far from how she felt on May 9, 2014 after Peyton suddenly went into a seizure after working out with her father, Brian Evans, at a local gym in Ocala, Florida.

Peyton was taken to Ocala Regional Medical Center and then airlifted to UF Shands. “At first, I thought, ‘everything is going to be fine,’” Amy said. Doctors performed a CAT scan that showed internal bleeding in Peyton’s brain. “They told me that she would never be the girl she had been if she survived,” Amy said. “It was very rocky, because she was as beautiful as ever there in the hospital.” Peyton’s brain swelled, and the question of organ donation arose.

By coincidence, when Peyton had received her learner’s permit a few months earlier, she chose to be an organ donor. “She said that she wanted it without hesitation,” Amy said. “I was so proud of her.”

Registering while obtaining a learner’s permit or a driver’s license is the most common way to join the registry of organ, tissue and eye donors, noted Danielle Cornell, executive director of LifeQuest, an organ procurement organization based in Gainesville. Despite the convenience of this approach, barely 50 percent of all Floridians over 18 have chosen to be organ donors. Donor organizations are working to increase that number. “Most people can be organ donors,” Cornell said. “We recently had a 74-year-old stroke victim who was a donor.”

Bailey’s mom, Tia Aultman, advocates for organ donation from the vantage point of organ recipients. “I can never express how grateful I am,” she said. In the two years since Bailey’s transplant, her health has been great, and her latest passion is gymnastics. “From the start, the heart has worked perfectly,” Tia said. To ensure this, Bailey is on multiple medications to prevent the rejection of her heart. “She’s a champion at taking pills,” Tia said.

Tia and her family wanted to know the family of the heart donor, but they were uncertain about how they would be received. “I felt guilty about what they went through,” she said. “I didn’t know how they would accept us. I thought they might be angry with us.”

The opposite was true. The two families met at the inaugural Pey It Forward Fun Run in 2015, an event that raises funds for various causes. “Our meeting went so much better than expected,” Tia said. “The two of us will be like family forever.”

Many donor families take a positive approach to organ and tissue donation, Cornell said. “It’s the silver lining in a tragedy,” she added. Dr. Biagio “Bill” Pietra, the chief of pediatric cardiology at the University of Florida College of Medicine, concurred. “Families want to find something positive from something negative,” he said. LifeQuest is working with the families of both organ donors and organ recipients to put organ donation on personal terms.

For example, LifeQuest Public Education Coordinator Coral Denton arranged for Amy Whittemore to speak to Forest High students. “It was really hard; Peyton should have been in that room,” she said. “But, it was rewarding. I got feedback that kids went home and said, ‘Mom, I want to be an organ donor.’”

The UF Health Shands Transplant Center has performed more than 7,000 organ transplants over the past 50 years — transplanting organs including the heart, liver, lung, kidney and pancreas. The multidisciplinary staff is humble about its role, said Wanda Godsmark, associate vice president of nursing services at UF Health. “It’s about you,” she said, as she addressed both donor families and recipient families at LifeQuest’s Tree of Life Celebration held March 31 at UF’s Wilmot Gardens. “It’s not about us. It’s about the stories that make the difference in promoting a culture of giving — give that others may live.”

Ashley Kennen enjoys sharing with groups about how her lung transplant has transformed her. “When someone signs up as an organ donor, I get an adrenalin rush,” she said. She’s passionate about organ donation because of how her double-lung transplant has changed her life. “I’m a different person,” she said. “I can actually do things.”

Her activities center around the three children she and her husband, Jonathon, are foster parents to. “Since I was little, I dreamed of being a mom, but I didn’t see how I would be able to it,” she said.

Kennen’s doubts were due to her ups and downs fighting cystic fibrosis (CF), a hereditary disease that impairs the lungs and digestive system. After being ill much of her childhood, Kennen lived relatively normally during middle school and early in high school. She was a member of the Buchholz High School marching band and Spanish Club. Her health gradually declined, but she kept as active as possible, including attending Santa Fe College, where she met Jonathon. They married in 2008.

In 2009, Kennen caught pneumonia, and her immune system was so weak that she couldn’t bounce back. Her weight dropped to 80 pounds, and she was constantly on oxygen. “Jonathon became my caretaker,” she said. “The main reason I kept fighting is that I didn’t want him to lose his wife — I didn’t want my family to lose me. It would have been easier to close my eyes and let go.” Doctors determined that a double-lung transplant was vital to her survival. She was on the transplant list for only six weeks when she received a phone call saying she would be receiving her transplant.

In addition to her gratitude for her own lung transplant, Kennen knows the importance of organ donation because of her friendships with many children with CF. “I’ve seen many friends die, and I wish they could have received lung transplants,” she said.

David Robinson has gained a new appreciation for life since his kidneys started failing 10 years ago. He was unaware there was a problem until he noticed a rash on his leg. “I didn’t think anything of it, but my wife insisted I go to the doctor,” he said. Dr. Daniel Rubin, his physician at UF Health Family Medicine at Haile Plantation, did blood work. “He called me when he got the results and said, ‘You need to get to the ER right away,’” David said. “My creatine level was about 10 times the normal. The doctors didn’t understand how I could be walking around.” Robinson started dialysis right away, and he has continued with treatments for 10 years. “I don’t let it get me down,” he said. “I thank God for the help I get.”

His will to live has been tested. “I considered suicide, but my family gave me a reason to live,” he said. He is especially motivated by his daughter, Tia, a Fort Clarke Middle School student and a member of both the school’s basketball team and an AAU (Amateur Athletic Union) team.

Robinson has modified his lifestyle to take excellent care of himself, including dropping professional wrestling. “I’m very dedicated, and I make all my doctors’ appointments,” he said. He was placed on the kidney transplant waiting list this February, and in the meantime he does speaking engagements on behalf of LifeQuest. Robinson needed to raise $5,000 toward his transplant. His church, Second Morningside Baptist Church, and his mother’s church, the Archer Church of God, have raised most of the money. “It’s very important for people to give people life,” he said. “God has blessed us all.”

When Pam Ford discusses organ donation, she recounts in great detail the events of August 19, 2006. It was the second day of school. Kyle and a friend had ridden their bikes about a mile from the Ford home in Bell. Kyle was passionate about become an archeologist, and the pair were looking for arrowheads and fossils. Pam had called Kyle on his cell phone at around 8 p.m. to encourage him to get home before dark, although there was plenty of light left.
Fifteen minutes later, she got a call from the mother of Kyle’s friend, telling her that Kyle had been hit on his bike. The other mother picked up Ford, and they drove to the accident scene to discover that an air ambulance had just picked up Kyle. The two of them arrived at UF Health Shands Hospital at about the same time as the air ambulance. “I saw a doctor and asked, ‘How is he?’” she recalled. “The doctor told me his head was crushed in the back.”

The staff allowed Ford to visit Kyle. “He grabbed my hand and squeezed it,” she said. “I could see a tear in his eye.” At that point, Ford had a strong feeling that Kyle would not survive. “A mom has an instinct,” she said.

Two days later, at 10:30 am, doctors confirmed that he was clinically brain dead. Kyle had designated himself an organ donor when he received his learner’s permit a few months earlier. “I never thought this would happen,” she said.

Ford’s feelings were transformed once matches for Kyle’s organs occurred. “I went from despair to excitement,” she said. “It’s indescribable how it felt to know that part of Kyle would be living in someone else.” Ford communicates with the mother of the girl who received Kyle’s heart when she was 17. “She told me that within 12 hours of the transplant, her daughter was sitting up in bed and asking for something to eat. That’s like Kyle,” she said. “He had a heck of an appetite.”

Based on the inspiration she took from Markuson and other medical professionals she met, Ford decided to become a registered nurse. She now works on a medical-surgical floor at North Florida Regional Medical Center. When patients ask about her children, she tells people about Kyle, too — not just about her other son and daughter. “I’m proud of him, and I definitely want to talk about him,” she said.

The need for organ donations is great, with more than 124,000 people on the national waiting list for organ transplants and 21 people dying daily while waiting for a transplant. However, only about half of Florida residents are registered as donors. There is no age limit on registering.
In addition to registering while obtaining a learner’s permit or a driver’s license, you can register at donatelifeflorida.org. Donate Life Florida is a nonprofit organization that maintains a registry for organ, tissue and eye donors under contract with the State of Florida’s Agency for Health Care Administration.