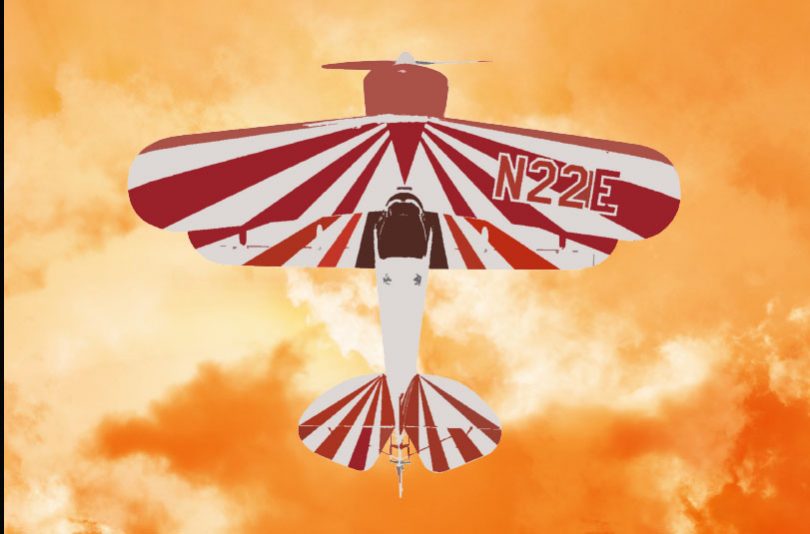 “It’s not easy to be the best. You must have the courage to bear pain, disappointment and heartbreak. You must learn how to face danger and understand fear, yet not be afraid. You establish your goal, and no matter what deters you along the way, in your every waking moment you must say to yourself ‘I could do it.’”  —Betty Skelton

This quote hangs in Deborah Butler’s office. It is both a form of encouragement and a reminder of the history of Butler Plaza. Once a historic airfield, the area is now a mecca of shopping, dining and recreation.

At the center of it all was the Butler family, whose passion and dedication drove a family-owned produce stand into one of Gainesville’s most developed parts of town. As Deborah Butler grew up in this city, she always valued its history and her family’s place in it. Her long-standing love of food is combining with her love of history to inspire Butler’s next project: a food hall. 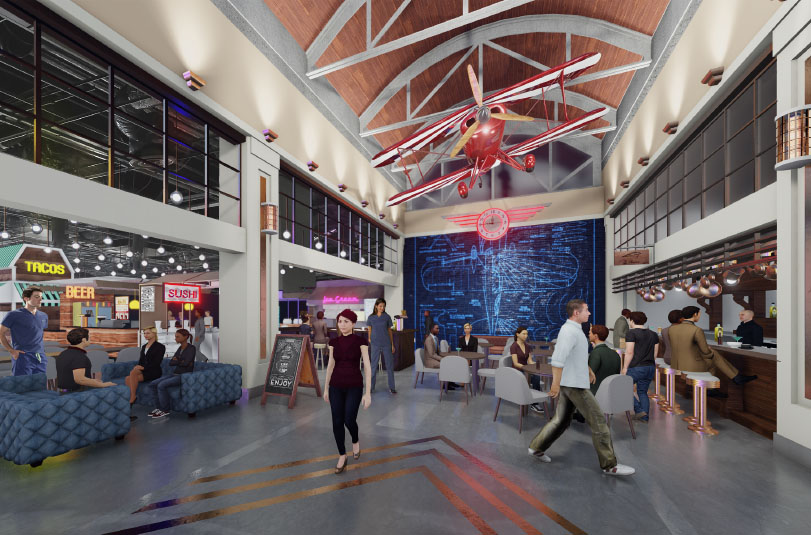 The Stengel Field Food Hall is expected to open in late 2018. The design will be inspired by the location’s aviation history.

“I have a lot of love of food in my history, coming from a line of farmers andfishermen,” Butler said. “My dad had a produce stand in Plant City and brought that same concept here in 1939.”

Butler’s inspiration for the food hall comes from a visit to her family one Fourth of July weekend. While visiting her godchildren in San Francisco, she visited the historic Ferry Building. The Ferry Building is a terminal for ferries crossing the bay, but its marketplace is a gathering of local farmers, artisan foods and independent businesses.

“I was just amazed by the energy, the excitement and the offerings from the local food culture as well as the tie in to the history of the space.” She realized she wanted to bring that energy back to Gainesville.

Butler is not the only developer to be wooed by the allure of the food hall. Until now, they have mostly been confined to big cities like San Francisco, Boston or New York, but food halls are rapidly becoming the hottest trend in retail. Historic locations like Chelsea Market in New York or the Ferry Building offer more than shopping, they offer community and an enjoyable food experience.

“Food is something that’s such a part of our culture now — all the way from children to baby boomers. All socioeconomic groups are just enamored with food,” said Butler.

To capture the same historical elements that exist in other popular food halls, like the St. Roch Market in New Orleans, originally established in 1875, Butler looked to her property’s history. The significance of the Stengel Airfield caught her attention.

In 1937, Carl Stengel left the Gainesville Police Department to open his flight school. Though he had been working with the GPD since 1924, Stengel had always been interested in aviation. His flight school hit its peak in World War II, when Stengel trained UF students and army pilots. 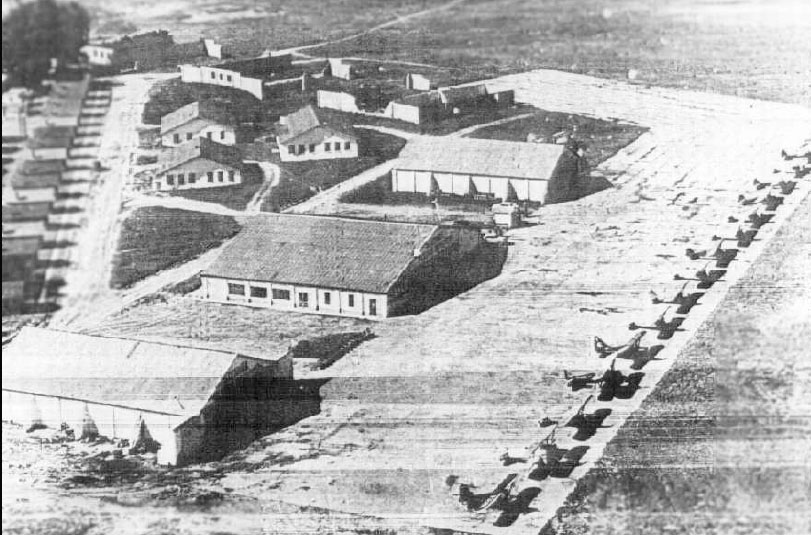 The Stengel Airfield was the site of Carl Stengel’s flight lessons and the building of the Lil’ Stinker. It closed in the early 1970s.

Stengel Airfield closed in 1952, and in 1971, Clark Butler purchased the land. Deborah Butler plans to commemorate the airfield in the Stengel Field Food Hall, to be opened in late 2018.

“We’re incorporating all that rich history from these icons into the architecture, the hardscape and landscape, the animation of the streets and art within the streets. It’s all an amazing blend,” Butler said.

The history has a personal touch for Butler.

At its peak, Stengel’s school had nearly 600 students and the first commercial flight to Gainesville landed at Stengel field. Famed aircraft designer Curtis Pitts also built the second and oldest remaining model of his infamous Pitt’s Special, a lightweight biplane known for its agility, at Stengel Airfield. This plane was purchased by none other than the “First Lady of Firsts,” Betty Skelton, whose daring life still inspires Deborah Butler.

Skelton was a three-time winner of the U.S. Female Aerobatics Championship, all with her Gainesville-born Pitt’s Special that she lovingly named “Lil’ Stinker,” and a famed daredevil. She set 17 aviation and automobile records and championed the advancement of women in aviation and auto racing in the late ’40s and early ’50s. She later donated “Lil’ Stinker” to the Smithsonian, where it hangs to this day in the National Air and Space Museum’s Steven F. Udvar-Hazy Center.

“To have her journey intersect Gainesville in Stengel Field and the impact she made … is amazing,” Butler said. “I think she is just such a great role model (for) everybody, man or woman, boy or girl.”

One of Skelton’s most impressive stunts was cutting a ribbon with the propeller of her plane, while upside down and only 10 feet off the ground. Her bravery and passion inspires Butler, and she seeks the same qualities in the people who work with her.

“One thing when you read about Betty Skelton that stands out is that she is hard-working and persistent, a fearless risk taker, a trail-blazer,” Butler said. “The people (that) I’ve worked with to create not only the Food Hall, but the entire project, they all fit in that category.” 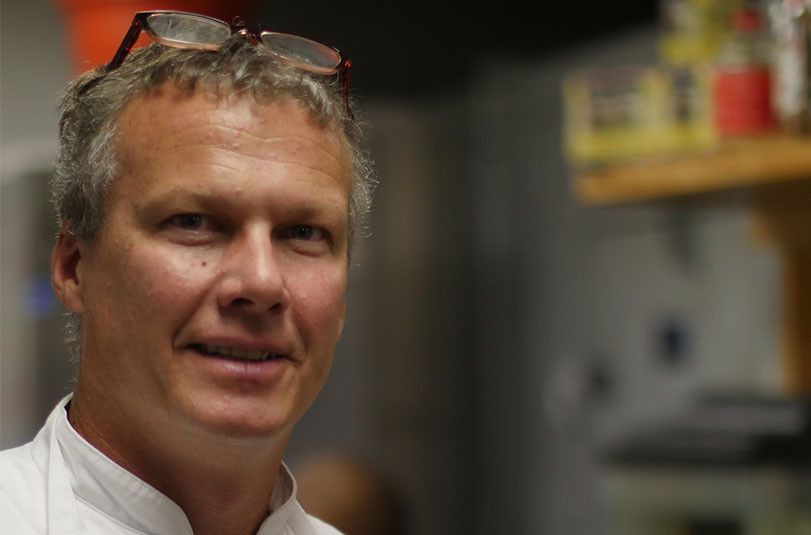 “I’ve known Deborah for a long time … we started talking about the town center and then talking about a food hall,” Gill said. “I thought ‘What an amazing opportunity for me to work on something within the community.’”

Gill’s vision is similar to Butler’s: build a community that celebrates its arts and culture. Together, they look to create a place where people can spend hours shopping and dining, where they can showcase the community’s local-oriented nature. Gill will even open his own French bistro, L’Avion, as an anchor to the 13,000-square-foot food hall.

“I’ve learned a lot in knowing Chef Gill over the years because he has his finger on the pulse of food, the best sourcing and preparation techniques in Gainesville,” Butler said. “This community is so fortunate to have so many talented individuals that have such a passion for what they do.”

From craft beer to locally-grown food, Stengel Field Food Hall will be at the forefront of these ongoing trends, which wouldn’t be possible without Butler’s efforts.

“It took years of walking, touring great properties and observing and talking to people because when you do build something, you want it (to be) relevant,” Butler said. “You can create something relevant that people can identify with, feel proud of, and it’s part of their community (and) they have a connection.”

She continued, “What I’m really proud of is that now you won’t have to jump in your car to drive to Jacksonville, Orlando or Tampa to shop or to have some of the incredible food experiences that were missing here.”

To create an authentic food hall experience  worthy of the big cities, Butler traveled the country. Looking at properties and paying attention to the evolving nature of different communities, she created a vision that she is now working hard to bring to life.

The creativity and uniqueness of this grand venture once solely existed in the mind of Deborah Butler, but can see it when you visit the Stengel Food Hall as it opens in late 2018.

“(It’s) a community and a gathering place — that’s what’s it’s all about.”