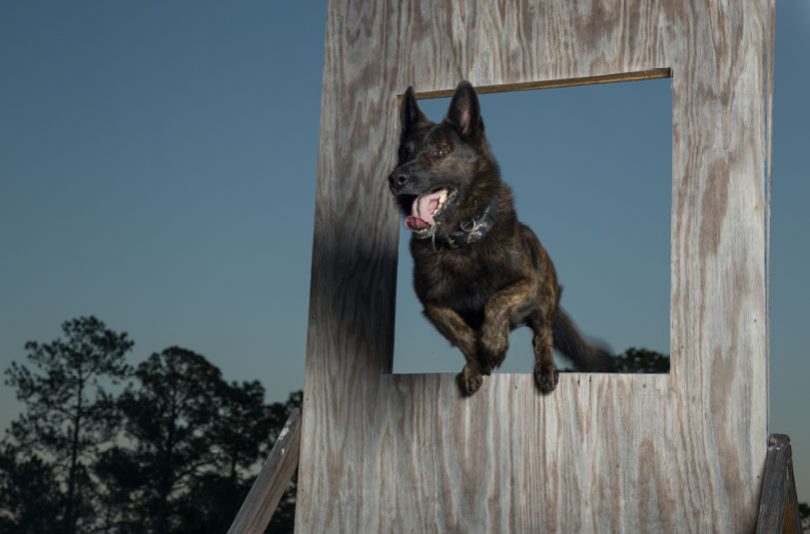 Officer Nero is a good boy.

As gentle with children as he is tough on criminals, he is an endless source of amazement for his partner, Officer Rob Rogers.

“There’s not a day that goes by where he doesn’t do something that amazes me,” Rogers said.

Nero is nearing retirement, but he still feels the requisite hunger for his job. He trains 10 hours a week to keep his instincts honed. He hasn’t lost his mental acuity or physical power, even at the ripe old age of 7 years old.

Nero is a Dutch Shepherd, a member of the Gainesville Police Department’s K-9 Unit and, when off duty, Rogers’ pet dog. The GPD currently has 10 dogs — and corresponding officers who handle them — in the K-9 unit. The unit selects the dogs as puppies, preferring those that have had no previous training.

“We want to start from scratch and train them up to our standards,” Rogers said. “When we get them, they just know how to blink, breathe and go to the bathroom.”

Then, the culling begins. Dogs wishing to join the force must attend a six-month training school — the state mandates a minimum of 490 hours. After completing the training, a dog can receive additional certification. For example, Nero is dual-certified for narcotic detection.

“We’re looking for dogs with what we call ‘ball drive,’” Rogers said. “If I throw a ball into the woods, will that dog go crashing through bushes, thorns, mud to get it? If he does, then I can get him to do anything.”

The training is rigorous because the job is dangerous.

“It’s the highest liability unit in law enforcement,” Rogers said. “We respond to so many types of calls. Sometimes, the dog needs to find a weapon or piece of evidence; sometimes, he needs to find a murderer that’s hiding in the woods. Nero and I have experienced things I’ve never experienced with anyone else.”

That sentiment was echoed by Sgt. Brad Litchfield, who oversees the unit. He has been working with his dog, a German Shepherd named Knight, for three years.

“I see Knight more than I see my kids, so our bond is pretty strong,” Litchfield said. “It is a neat relationship, where I’m well aware that Knight wants to please me on every call we go on, but in the same vein, I want to do everything in my abilities to run a call correctly and to allow him to be as successful as possible.”

With such a wide variety of calls to field, Litchfield said there is no such thing as a normal day for the members of the K-9 unit. They work in 10-hour shifts, although they will stay longer if necessary, and they handle everything from routine backup to crimes in progress, building clearings, narcotics sniffs and catching fleeing criminals.

“A shift would ‘normally’ consist of patrolling the current hot spots in the city based on direction from the shift commander,” he said. “The teams are not assigned a particular zone but run citywide to help respond to any priority call. We have a mutual aid agreement with the county, so if they need K-9 assistance, we often run outside the city to assist, and they do the same for us. The handler also has to find time to train with his dog each shift and keep up on the ridiculous amount of paperwork and record-keeping needed to maintain current team certifications.”

The K-9 unit does more than just root out criminals. Rogers recalled a night when a suicidal college student downed a potentially lethal dose of pills and wandered off campus. Nero got her scent and found her when no one else could. The officers saved her life. 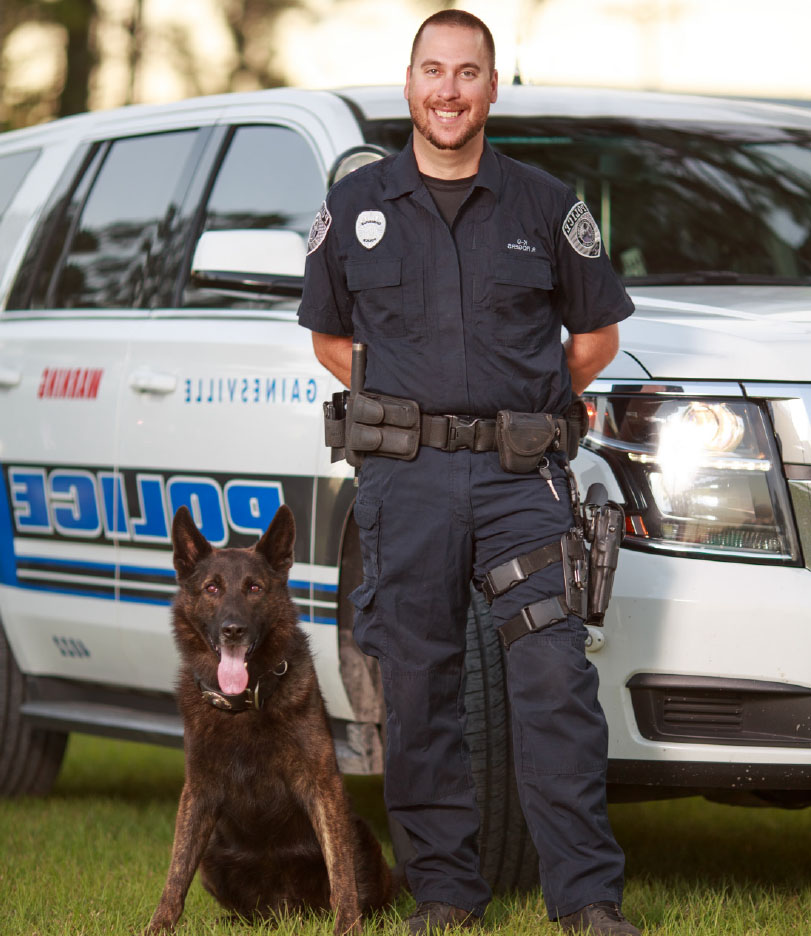 “I knew it’s what I wanted to do since day one,” he said. “These are cops’ cops. You can’t be afraid to follow that dog into the woods in the middle of the night. I’ve run into snakes, gators, every type of wildlife. You have to be passionate about working with the dogs. It’s in your blood.”

On a recent training day at “the barn” — the nickname for the city’s Fleet Management compound in Northwest Gainesville — Nero sat in his patrol car waiting for his day to start. Rogers asked a reporter to throw his car keys into the middle of a rolling grassy field, which the reporter did — not considering what might happen if Nero couldn’t find the keys until they were already arcing through the air.

Then, Rogers let Nero go. The dog ranged the wide field for several minutes, each one of his 220 million olfactory receptors searching for the item he could only trust was out there. Enough time passed for the reporter to feel a queasy pang of panic, and then, Nero sat down. This was his signal for Rogers to come retrieve the object he had found, the needle in the haystack, the car keys.

It was near 5 o’clock in the evening, and Nero’s day had just started. He and Rogers and the rest of the K-9 team were scheduled to work until 2 a.m., going to different locations to practice various scenarios and fielding calls when they came in.

“I spend more time with him than I do with my wife,” Rogers said. “The connection is just incredible.”

In fact, the connection is so incredible that Rogers said he doesn’t see himself working another dog when Nero retires.

“Some officers work multiple dogs, but I don’t think I would,” he said. “After retirement, by the grace of God, he’ll come live with me. I can’t imagine getting ready to go to work and him watching me take another dog. That would break his heart. He’s my family. He’s the best thing that ever happened to me.”

Clearly, this is not your average man and dog relationship. Of course, there are times when Nero does something quintessentially canine, like getting sprayed by a skunk.

“We had to drive with the windows down for a week after that one,” Rogers said.

Still, watching them together, man and dog, is like watching a couple of old army buddies. Rogers trusts Nero. It is a trust that can only be born in a crucible, such as war or the line of duty. Yet, it is different from the trust one human places in another. It is extra-human, mixed with the love a man can only feel for his pet. Rogers trusts a dog with his life. And the dog has earned it.

Donations Are Welcome: Several local businesses donate their spaces to the K-9 unit after hours, allowing the dogs to practice in real-life situations. GPD is always looking for more locations. Office compounds and warehouses are especially helpful.

For members of the community who want to help in other ways, the force accepts donations of dog beds, toys, food and even dogs. The GPD is looking to add two dogs to its roster, and donors are allowed to name the dogs.

“Some officers work multiple dogs, but I don’t think I would. After retirement, by the grace of God, he’ll come live with me. I can’t imagine getting ready to go to work and him watching me take another dog. That would break his heart. He’s my family. He’s the best thing that ever happened to me.”—Officer Rob Rogers