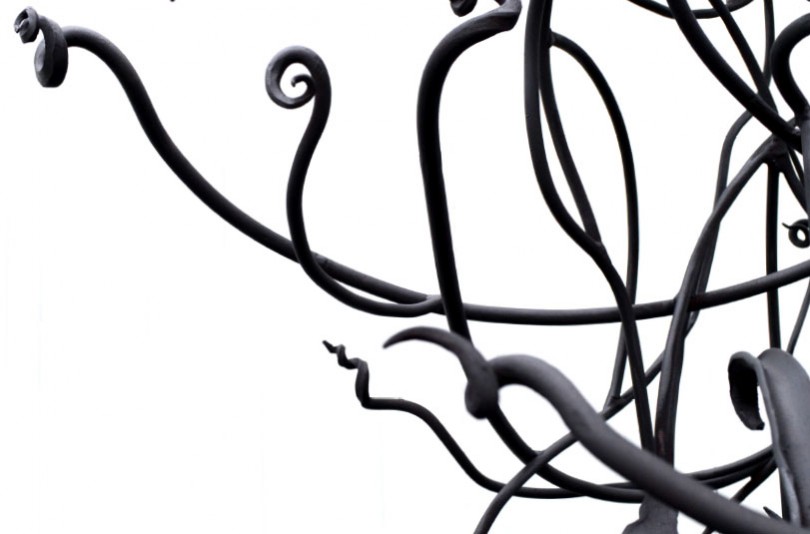 In theory, blacksmithing is easy to explain — hammering metal on an anvil to forge and shape it. The name comes from the practice of forging black iron, and it clearly stuck.

But for Leslie Tharp and Jordan Borstelmann, two local blacksmiths, it’s their job and their passion. For the community, these two strong personalities and skilled smiths provide an entry into blacksmithing.

Tharp has been a professional blacksmith for the better part of a decade, working for cities, businesses and individuals alike on commissioned work. Some locals may already recognize Borstelmann from his daytime job at Satchel’s Pizza, but blacksmithing is no less his passion than it is Tharp’s.

Tharp, Borstelmann and Sullens all approach the craft with a powerful sense of humility. There’s a pervasive mindset of there always being something to learn.

Coincidentally, they are both alumni of the Penland School of Crafts in North Carolina and also Florida natives. The two separately teach classes on the art of blacksmithing.  The classes include an axe-making workshop and a blade-forging workshop, which are both very popular, as well as a fireplace set class and seasonal bottle-opener class that coincides with Oktoberfest. Most recently, Borstelmann was excited to teach a “pirate class,” for “Talk Like a Pirate Day” in September.

Tharp admits that she had trouble herself when she first moved from welding to smithing. She was worried that she wasn’t strong enough, she felt defeated. “It’s so much more finesse than you would think,” she explained. “It’s when you apply your strength.”

“Stamina is good too,” Borstelmann said.

Many people have that idea of the gruff-and-tough blacksmith hammering away at the anvil frequently seen in comic strips. But it can be intimidating, Borstelmann said, when it comes to the safety required to successfully complete a project. “Flakes” of hot metal often pop off and land on the skin. Learning to deal with them is part of the blacksmith trade.

Both Tharp and Borstelmann have their fair share of injuries, although, thankfully, none have been serious. Once, a single piece of flake flew onto Borstelmann’s lip and he instinctively tried to push it out with his tongue, effectively burning his tongue and his lips. But it healed quickly, and is thankfully about the worst that has happened to him in all his decades of blacksmithing. 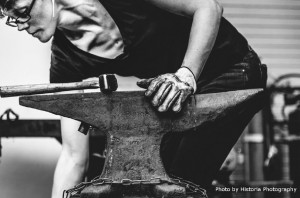 Hunter Longshore, 35, works for a mining equipment manufacturer in Alachua, but has taken blacksmithing classes with Tharp and Borstelmann. His daily line of work deals more with high technology things, like electronics and computers, he said.

To him, blacksmithing is a lot more intimate, and that’s from where the personal draw comes. It started out as something he could do on a Sunday afternoon, but quickly gained steam into a full-blown passion. “Leslie has a certain amount of creative energy that just seems to rub off on you,” he said. “It’s contagious.”

But it’s with Borstelmann that Longshore has spent most of his time learning, meeting at Borstelmann’s home at least twice a week for instruction. To him, the progress is as intimate as the craft: you measure your skill by techniques learned and by tools acquired, most of which blacksmiths build themselves.

‘Making Your Fantasy Real’: A Playful Approach to Teaching

Once a strictly professional craft practiced only by tool-makers and paid artists, the last 50 years have lent themselves more and more to blacksmithing as a hobby, or more aptly, an art.

Borstelmann, who was also initially interested in the craft because of the idea of self-sufficiency, speaks to an aspect of “making your fantasy real” that is very much a new idea in blacksmithing. “I read a lot of Conan [The Barbarian] as a kid,” Borstelmann laughed, “And now, I kind of want to be Conan.”

“Some of the culture of blacksmithing is more reserved; it’s not very playful,” Tharp added. “Our teaching method is a little more approachable for some people.”

It’s hard to say where the popularity for blacksmithing in a less traditional role came in, Tharp said. Weapon fanatics have always been around, but recent television shows like the History Channel’s “Forged in Fire” play a big role in popularizing and building interest in blacksmithing.

“When that show came out, all of a sudden, everybody and their dog wants to learn how to make knives,” said Kirk Sullens, program chairman for the Florida Artist Blacksmith Association, or FABA. Sullens said there’s been a steady increase in interest in the last 40 years, although with a recent boom in the “doomsday prepper” demographic.

Sullens essentially runs FABA, which may have been considered a guild in medieval times. The association formed in 1985 with 40 members and quickly established itself as the main body for blacksmith gatherings in Florida. The association swelled to to 363 members in 2004, today resting at around 150. Although their yearly conference just passed in late September, FABA holds monthly meetings around the state, the dates of which are constantly updated on the FABA website at blacksmithing.org.

Sullens compares his role to that of a circus ringmaster. “It is my circus and they are my monkeys,” Sullens said energetically. “That’s my crowd.”

Sullens, who started smithing in the early 80’s, is no stranger to teaching classes of his own. He has a deep interest in animals, and in building and forging projects revolving around wildlife. His personality allows him to bring his sculptures to life, he said. 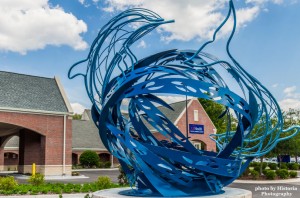 “The Chase,” a sculpture created in 2016 by Leslie Tharp located at the UF Health Shands Orthopedic Pediatric Center.

Drawing Inspiration from Both Art and Function

Tharp has been equally inspired by artwork as by functional uses for smithing, she said. Borstelmann first began smithing because he wanted to make high quality things that he could use — the intricate axes and knives with runes and designs he has a passion for creating always retain their original intended function of cutting. 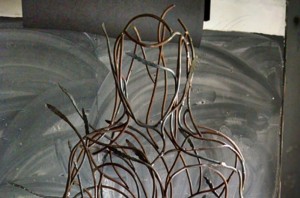 “The Skunk Ape,” a sculpture created in 2016 by Leslie Tharp for the private collection of Bill Bryson.

Tharp, Borstelmann and Sullens all approach the craft with a powerful sense of humility. There’s a pervasive mindset of there always being something to learn, or that even though one of them may be a master in one aspect, they’re a beginner in another. “No matter how good you get, there is literally nobody you can’t learn something from. They’re adding a nuance to it that you don’t have, and you might never think of until you see their work,” Sullens explained. 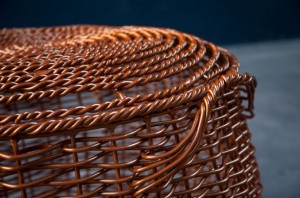 Close-up of sculptures created by Leslie Tharp in 2014 for First Magnitude Brewing Company.

For locals interested in blacksmithing, Sullens said he would specifically recommend Tharp and Borstelmann to anyone.

In her classes, Tharp said, there’s a definite enjoyment her students get from working with their hands, particularly if they have an office job. Tharp began teaching after realizing there was an interest in the community that wasn’t just her own. And while blacksmithing remains a popular hobby, Tharp and Borstelmann both plan to stay in Gainesville to guide interested parties. 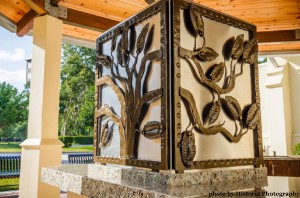 “I feel like we’ve got a pretty good town full of people. We’ve got people that like to do stuff – get outdoors, sweat, build something,” Tharp said. “Creativity is encouraged in this town.”

“Gainesville is a super cool town,” Borstelmann added. “I think we just lucked out.”