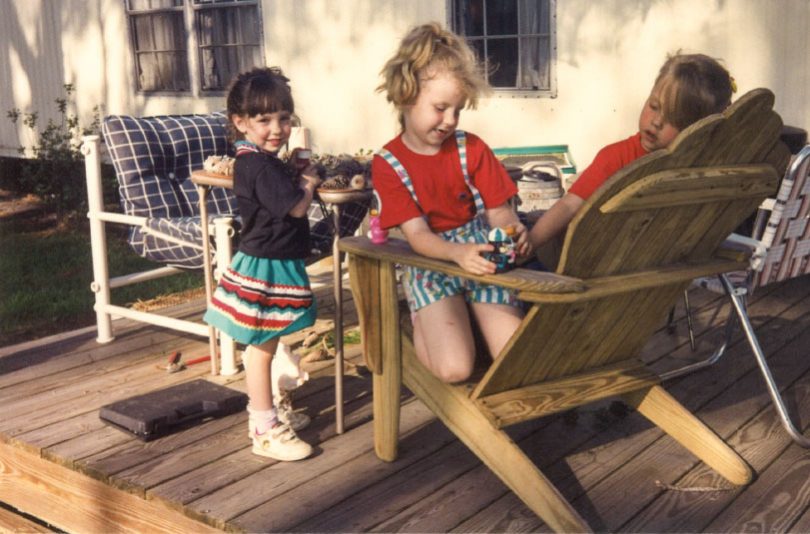 Many years ago, my father – with help from my brother – built an Adirondack chair. It was a beauty, with hand-beveled edges and a scalloped backrest. My brother remembers telling Dad that the screws were too short, but they moved forward with the project anyway using a serious application of wood glue.

The chair was awesome and provided comfortable seating for friends and family for many years.

After Dad passed away, my cousin came to stay with Mom. On many an afternoon he would relax in that chair. But one day, much to his dismay — and my brother’s amusement — the chair collapsed like a house of cards, leaving my cousin sprawled in a rubble of lumber that in no way resembled an Adirondack chair. I mean, every single board came off.

My cousin avoided serious injury — except perhaps to his pride. The chair, however, did not fare so well, and it laid in pieces out on the farm for close to a decade. At first, its remains sat upon the deck waiting for someone to put it back together. Eventually it migrated to the soil and pine needles on the ground beside the deck.

There it lay, all but forgotten, the skeleton of a once-honorable chair, exposed to the elements and to the insects and to time.

The earth nearly reclaimed that chair. Then one afternoon while doing yard work, I spotted a half-buried board. Curious, I began digging. Soon I had recovered all but one piece. The boards were slimy, worm-damaged and in the early stages of decay, but I brought them home anyway.

I pieced the chair back together, but it was indeed a sad sight, a lilting, frail conglomeration of rotting planks propped against some concrete blocks. I began to doubt the wisdom of trying to resurrect such a monstrosity. My wife — the self-proclaimed Voice of Reason — was certain that the remains were destined to continue their decay, only now in our yard.

“You’ll never get that thing back together,” she exclaimed. So naturally, I had to prove the Voice of Reason wrong.

I went to work. I replaced the missing board and used a file to bevel the edges so that it would match, imagining that Dad was smiling down upon me while I worked, no doubt chuckling at my rudimentary carpentry skills.

It wasn’t easy. I got blisters.

I used longer screws and then I hit it with the pressure washer. The chair held together and, to my amazement, that old wood shed its nasty green-brown skin, revealing rich-grained, fresh timber.

My wife stood in awe of its majestic beauty.

“I’m impressed,” she said. “I never thought you’d get that thing back together.”

(To my credit, I refrained from the obligatory “I told you so.”)

I obsessed over that chair for weeks, feeling my father’s spirit in it — and within me. I would stand and stare at its magnificence, much to the bewilderment of my spouse.

I even tried to fix some bad spots, using putty that was probably older than the chair itself, which left odd-looking, uneven yellow patches. I’m certain that Dad would find this particularly amusing. A coat of paint would cover it, but I decided to use a sealant so all the blemishes and imperfections as well as the wood grain could show.

Surprisingly, the chair looked much like it did the day it was made and is now a family heirloom to be handed down to my kids (providing the screws hold).

Lo and behold, another decade has passed since I had first fixed the old chair; it needed some attention again. So two years ago, I pulled it apart, this time sanding and patching the old boards before painting it a barn house red. But much to my surprise, sap began to bubble out of the wood. How could this be? That pine is about 30 years old!

Within a year the paint was peeling off.

But that’s OK. Perhaps it is

not meant to be red. Plus, this gives me another chance to work on it and return it to its original, unpainted splendor.