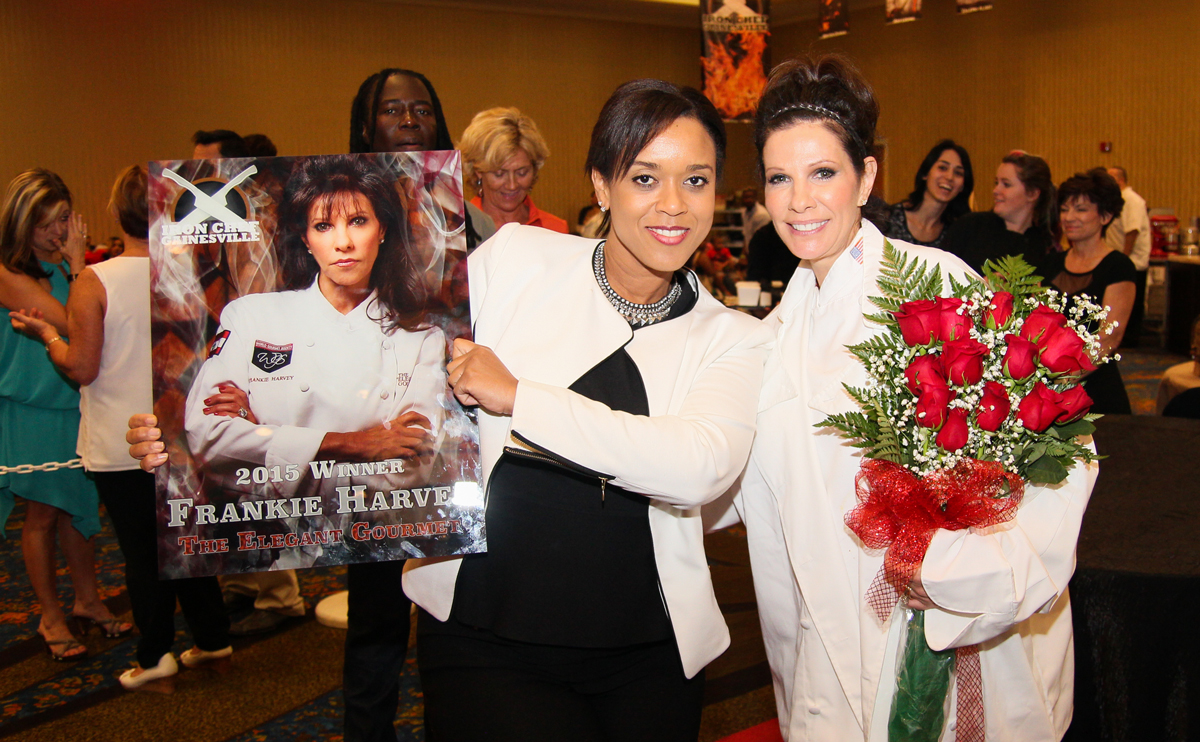 As a chef who has competed numerous times on national television for shows that are known to be, well, “Cutthroat,” I know firsthand how it feels to put your heart and soul on a plate to be judged. I also know the pressure of being in a timed competitive arena. Let’s just be real: It’s one of the scariest things one can experience. But, it’s also one that, for the right chef, gives a rush similar to climbing a mountain or ski diving — not that I’ve done any of those things before. It takes great creativity and agility to cook under pressure. My knowledge of this, I believe, helped me judge the Iron Chef Gainesville competition to the best of my stomach’s ability.

The 2015 contestants, Chefs Valero, Patrick and Frankie, had their game faces on from the beginning of the night. Each has very different backgrounds and culinary paths, but they all had the same goal in their eyes: to become the “Next Iron Chef” and earn the respect that comes along with the title in the Gator community. Once the secret ingredient was revealed, I, too, was nervous. I’m going to confess that I’m not a fan of bourbon. There, I said it! But, I knew I wanted to be able to taste the whiskey flavor without tasting only the whiskey flavor. You never want to be hit over the head with an ingredient, even if it’s a good one.

As the chefs began to cook and the excited crowd watched, the palms of my hands began to sweat! My usual nerves of steel were crumbing like a piece of coffee cake. What the heck was I nervous for? It was the vibe — the presence of perfection that I could relate to and appreciate. And when we were finally presented with each delectable plate, I could see, deep in the chefs’ eyes, the desire to please. One after another, as each plate presented as beautiful as the next, it would have to come down to taste. Yes, TASTE! I was selected to taste every…last…dish! That’s when the excitement kicked in and my palate became blessed! Each chef was able to incorporate the bourbon well, but in the end, it would be Chef Frankie of The Elegant Gourmet who would walk away with the win! Fellow Judges Chef Ivan, Simon Majumdar and I all agreed by the final bite that her whole heart was represented in every dish. Her A-team was complete with assistance from Chef Charles Hahn and chef-in-training Peyton Agliata. These three together had a groove that was anything but crowded. Their spirits seemed to connect, and the final result was our treat. I, for one, am always inspired by teamwork, and I love when I see a team that works!

In the end, I don’t think I’ve ever tasted a better time, which was made even better by the real meaning behind this event, the three amazing charities: Child Advocacy Center, PACE Center for Girls Alachua and Tyler’s Hope for a Dystonia Cure. All three provide hope and light where there may have been darkness. Meeting the directors of all three benefiting charities, along with some of the children who are reaping the results, was the icing on the cake — and what’s a grand celebration without cake!

The 6th Annual Taste of Gainesville by the Numbers

Close to a 100 volunteers donated their time.

The event raised $50,000 for the benefitting charities.