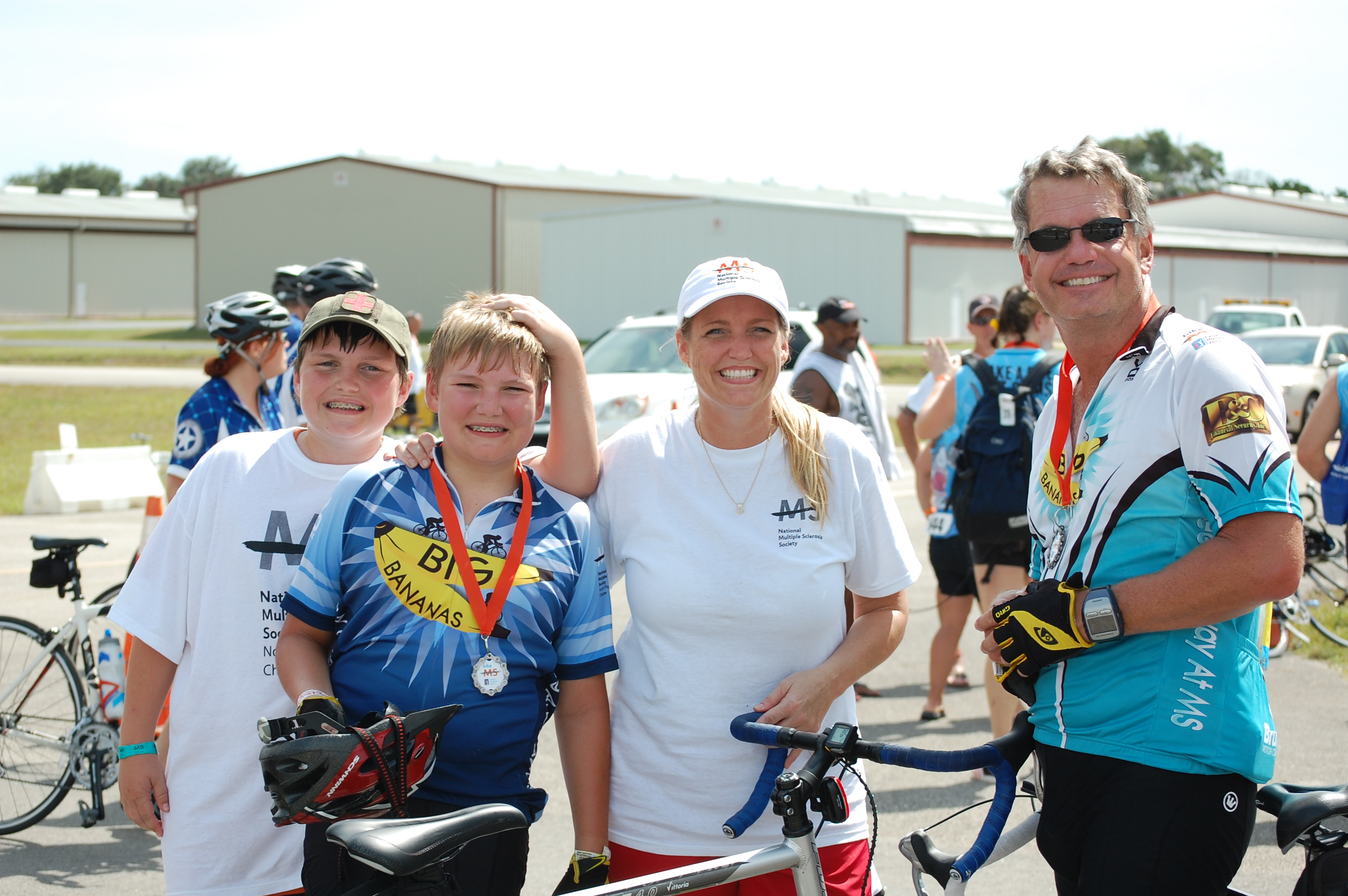 When Joshua McAfee rides his bike, he usually has a destination in mind — down the road to the school bus stop in the morning, a mile and a half to Grandma’s house for a weekend visit or, as he did last September, 150 miles on a two-day route from St. Augustine to Daytona Beach to raise money for the National Multiple Sclerosis Society.

Joshua, 12, was the youngest cyclist in the most recent North Florida chapter’s Bike MS: PGA TOUR Cycle to the Shore, one of 100 NMSS cycling events across the country. On Sept. 29, the Gainesville native rode with his father, Don, on team Big Bananas, a group of more than 30 elite North Florida cyclists who each pledge to fundraise at least $1,000 for the event.

Don first participated in Bike MS four years ago when doctors found lesions on his wife Donna’s brain and diagnosed her with Multiple Sclerosis. Donna was training to run a half marathon when she started losing half her visual field.

“It came out of nowhere; I didn’t expect it,” Donna said. “So, that’s how we got involved with MS — by default.”

Donna has relapsing-remittent multiple sclerosis, which is characterized by intermittent flare-ups in an often dormant phase — it is always there, but not always evident. At times, her left arm won’t move or her left leg will drag behind her midstride.

When his parents told him and his brother about his mother’s MS diagnosis, Joshua said, he was kind of scared but his mind was blank. Soon, however, Joshua and his 13-year-old brother, Zach, better understood the disease and actively helped their mother administer shots and maintain IV lines.

“My honest to God motto was that I wasn’t going to let this disease define me; I was going to define it,” Donna said. “And I haven’t let it stop me.”

Although Joshua was too young to bike in Don’s first ride, he knew he wanted to cycle in the event as soon as he was of age.

Until then, Joshua volunteered with Zach and Donna, an RN at Shands UF and the Medical Coordinator for Bike MS, wrapping and cleaning bikers’ wounds and road rash and handing out Bio-freeze products and water bottles under the medical tent.

“He was saying, well, from the beginning, that he wanted to ride,” Donna said of Joshua. “Basically, he was just biding his time until he could ride. He turned 12 this past June, and he was finally old enough. They very rarely have 12-year-olds.”

Perhaps it was the rarity of so young a rider that created what Donna called an “almost cult following” of cheerleaders both in the race and on the sidelines, who chanted his name, waited for him at rest stops and held signs reading “Keep going, Josh!”

Joshua and his father trained for six months before the race: 10-mile rides at first, followed by 20- and 30-mile weekend rides and finally 30- to 40-mile rides a few weekends before the event.

“Training, we’d try to see how fast — not speed, but how fast we could get the miles done,” Joshua said. “In the bike ride, the goal was to get it done and help the community.”

And so he did. After contributing $3,000 in fundraising to the Big Bananas’ $62,000, Joshua biked 85 miles in about five and a half hours from St. Augustine to the Daytona Beach Boardwalk the first day and 65 miles back in about four hours the second day. He rode in about the middle of the 2,100-cyclist pack that traveled Florida’s scenic east coast down US-1 and A1A through historic towns and sandy beaches.

After the bike ride, three officers from the Naval Academy sought out Joshua to tell him he would one day make a great addition to the academy, Joshua’s dream to follow in his grandfather’s footsteps as a Naval Academy graduate.

Upon the chapter president’s request, he gave a speech to a crowd of 1,500 people, and the Big Bananas awarded him the title Most Inspirational Rider.

Joshua believes it takes more than one person to make a difference, he said. Bike MS is not only his contribution, but also his hope — a hope that, when his mother explained there is no cure for multiple sclerosis, compelled Joshua to interject,