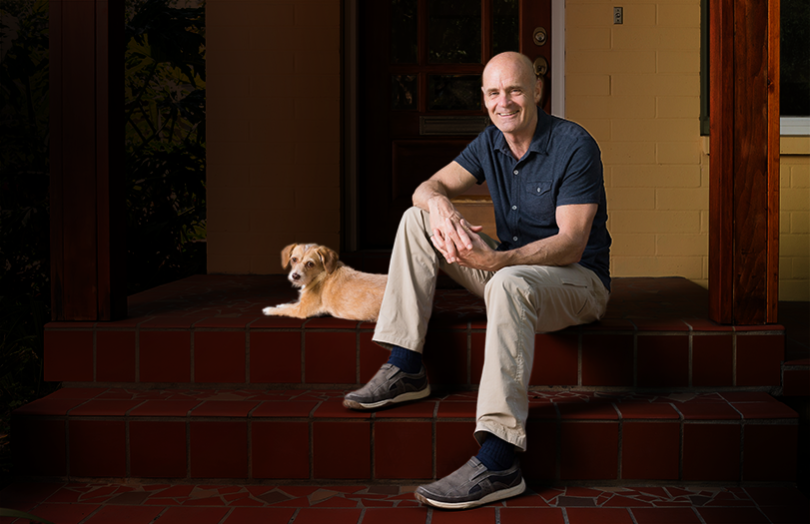 Written by by: Travis Atria, Photos by UF/Bernard Brezinski

Jack Davis, professor of environmental history at the University of Florida, was meeting with a student when the texts began. At first he disregarded his phone, but like an infant crying for milk, it would not be ignored. He checked to see what the emergency was, muttered a curse to himself, and pushed the phone across the desk so the student could see.

One month later, sitting in his sun-drenched writing room at home in Northeast Gainesville, Davis recalled the shock of that moment: “I was rendered speechless. It’s still strange to reconcile Jack Davis and Pulitzer Prize together.”

Davis’s prize-winning book, “The Gulf: The Making of an American Sea,” traces the history of the Gulf of Mexico, from its formation some 300 million years ago up to the present day. He said his goal, as an author and environmental historian, was to “show nature as a historical agent.” To that end, he organized the book’s chapters around the natural characteristics of the Gulf – birds, fishes, beaches, estuaries, rivers, weather and oil.

“I wanted readers to know that the Gulf is more than just an oil sump and a sunning beach,” he said. “It has a rich history that has been ignored.”

That history is bigger than Hurricane Katrina in 2005 or the British Petroleum oil spill in 2010, Davis said. It involves characters as diverse as Ernest Hemingway, who famously fished in the Gulf, and Edward Avery McIlheney, who created a bird sanctuary on the Gulf in 1890 (and whose father invented Tabasco sauce). Davis calls these figures “larger than life guys” who are “fun as hell to write about.”

The book also focuses on the connections nearly all Americans have to the Gulf. For instance, the Gulf receives water from 33 major rivers that drain 31 states.

“I like to tell audiences that a plow field in Iowa is a future beach in Louisiana,” Davis said. “That sediment gets taken to the Gulf, and anything else you put down in the soil will get carried down into the Gulf with it.”

Davis’s wide-ranging approach seems to have worked. Apart from the Pulitzer Prize in history, his book also won the Kirkus Prize for nonfiction and was a finalist for the National Book Critics Circle Award.

“It’s exciting, but it’s also exhausting,” Davis said of the awards. “For right now, my life is not my own. But the local support has been wonderful. I am stunned by how enthusiastic people are about having this history, how excited they are to learn about the Gulf’s history.”

In a way, Davis was born to write this book. He grew up around Tampa Bay and has had an “intimate, lifelong relationship” with the Gulf. 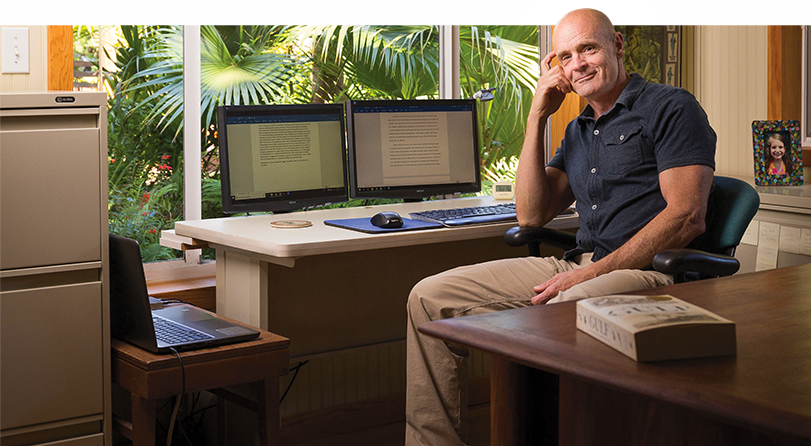 Davis’s prize-winning book, “The Gulf: The Making of an American Sea,” traces the history of the Gulf of Mexico, from its formation some 300 million years ago up to the present day. He said his goal, as an author and environmental historian, was to “show nature as a historical agent.” To that end, he organized the book’s chapters around the natural characteristics of the Gulf – birds, fishes, beaches, estuaries, rivers, weather and oil.

His heroes include the environmentalist/author Marjory Stoneman Douglas (his previous book was a biography of Douglas), and his writing room is adorned with a framed painting depicting Teddy Roosevelt as a cowboy in North Dakota. Roosevelt, of course, was an ardent conservationist, protecting some 230 million acres of land during his presidency. With these august figures as inspiration, Davis trained in graduate school as an environmental historian and began looking at the ways nature has shaped human history, as well as the ways it shapes our daily lives. All of this led him to write about the Gulf.

On May 30, Davis attended a luncheon at Columbia University to receive his Pulitzer Prize. He took his 13-year-old daughter, who he admitted was more interested in seeing Kendrick Lamar (the first rapper to win the Pulitzer for music). Famed photographer Annie Leibovitz snapped pictures as Davis walked onstage to shake hands with Columbia President Lee Bollinger and receive his award. It was heady stuff.

As thrilling as the ceremony was, however, the real thrill for Davis comes in his writing room, battling the keyboard. He is already working on his next book, a history of the bald eagle.

But that doesn’t mean the prizes aren’t nice.

“What’s greater than the Pulitzer?” he said. “It’s the Holy Grail.”