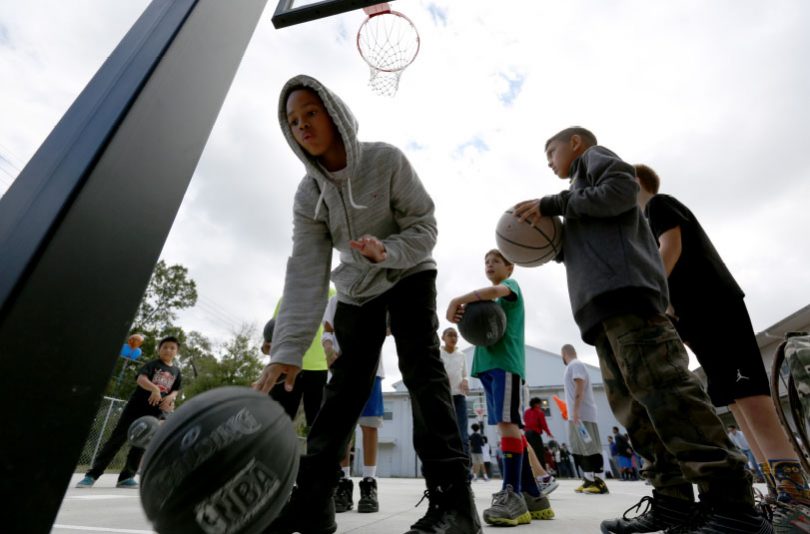 Gainesville Police Officer Bobby White gained notoriety as the “basketball cop” when a video of him playing ball with neighborhood kids after responding to a noise complaint went viral on social media January of 2016. White didn’t view what he did as anything unusual, and in fact, he initially tried to resist the attention from the media and others. But, when NBA legend Shaquille O’Neal showed up for White’s rematch with the kids, White saw an opportunity to use basketball as a tool — one that could rebuild relationships between police and the community.

In March of 2016, White created the Basketball Cop Foundation, with the mission to connect law enforcement agencies across the country with the kids in their community. Through its Hoops Across America initiative, the nonprofit supplies police departments with goals and basketballs as a way to connect kids with police officers. It also sponsors community and police-youth events.

“The mission is so simple, which is what makes it great,” said Tyler Rucarean, a Gainesville area marketing consultant and professional golfer who has helped plan special events.

White said he was surprised to see the public’s perception of police work.

“At first, I was disappointed to read comments of how cops interacting with kids was something outside the box,” said the 47-year-old White, who has been a Gainesville police officer for nine years. “Most cops do engage kids — I didn’t want undue credit for things cops do every day…However, when basketballs started showing up at the station in my name to give out, I thought, this is a fantastic opportunity to give more kids a chance to play.”

So far, $19,000 has been raised on the group’s GoFundMe page. In addition, they have sent basketball goals and hundreds of balls to 28 different law enforcement agencies all over the country.

Perhaps one of the best examples of what the nonprofit has been able to accomplish in its short life is the completion of basketball courts in Gainesville. The first was a half court built in the neighborhood of the pickup game that started it all. The second, a full outdoor court with NBA-size hoops, was constructed at the Upper Room of Greater Gainesville Church. It is next to one of the city’s biggest Section 8 housing complexes, White said.

The third project, an outdoor court at Ignite Life Center, was dedicated during an event on December 11 that included a dunking exhibition and free basketball clinic by former Gainesville High School standout Ron Larris.

“Ignite had approached me about helping build a half court — when I saw all the things they were doing, including providing an emergency foster shelter for teens, we moved forward with a full-size court,” said White, noting that it is a community basketball court open to everyone.

Ignite Hope Court was built through $12,000 in donations from Fine, Farkash and Parlapiano, P.A., Precise Concrete and Masonry, SnG Pavement Marking and Argos USA. The foundation covered the cost of the goals.

“City Commissioner Craig Carter spoke and surprised us by giving Bobby and the Basketball Cop Foundation an official proclamation stating that December 11 would now be known as ‘Basketball Cop Day’ in the city of Gainesville,” Rucarean said.

Although White was involved in sports growing up, he ironically never had time for basketball.

“I am motivated to do this and understand what some kids in the community face,” he said. “I grew up poor; my mom was a crack head, and I met my dad when I was 12 years old — but didn’t know who he was. My mom died of a drug overdose. I can relate to some of these kids.”

The future impact and reach of the foundation continues to look promising. White is featured in Microsoft’s 2016 Social Responsibility Commercial. CNN correspondent Kyra Phillips recently spent a few days with White to do a documentary on the viral video, which will air in early spring 2017. At press time, White was due to have a conference call with NBA officials about working together.

While he is grateful for the support of Shaq and donations from businesses, White would like more individuals in the community to join the team.

“There are 18,000 police agencies in the country — we will never run out of opportunities — but it has been a challenge raising money,” he said. “I hope the community will truly get behind this effort. Every $5 or $10 will make a difference in the lives of children and build relationships with police. It shouldn’t be about me or a company doing it but us as a community.”

Plans are in the works for the second annual high school all-star versus cop basketball game to be held sometime in March 2017. A fundraising dinner featuring Shaquille O’Neal is also being discussed for the fall, Rucarean said.