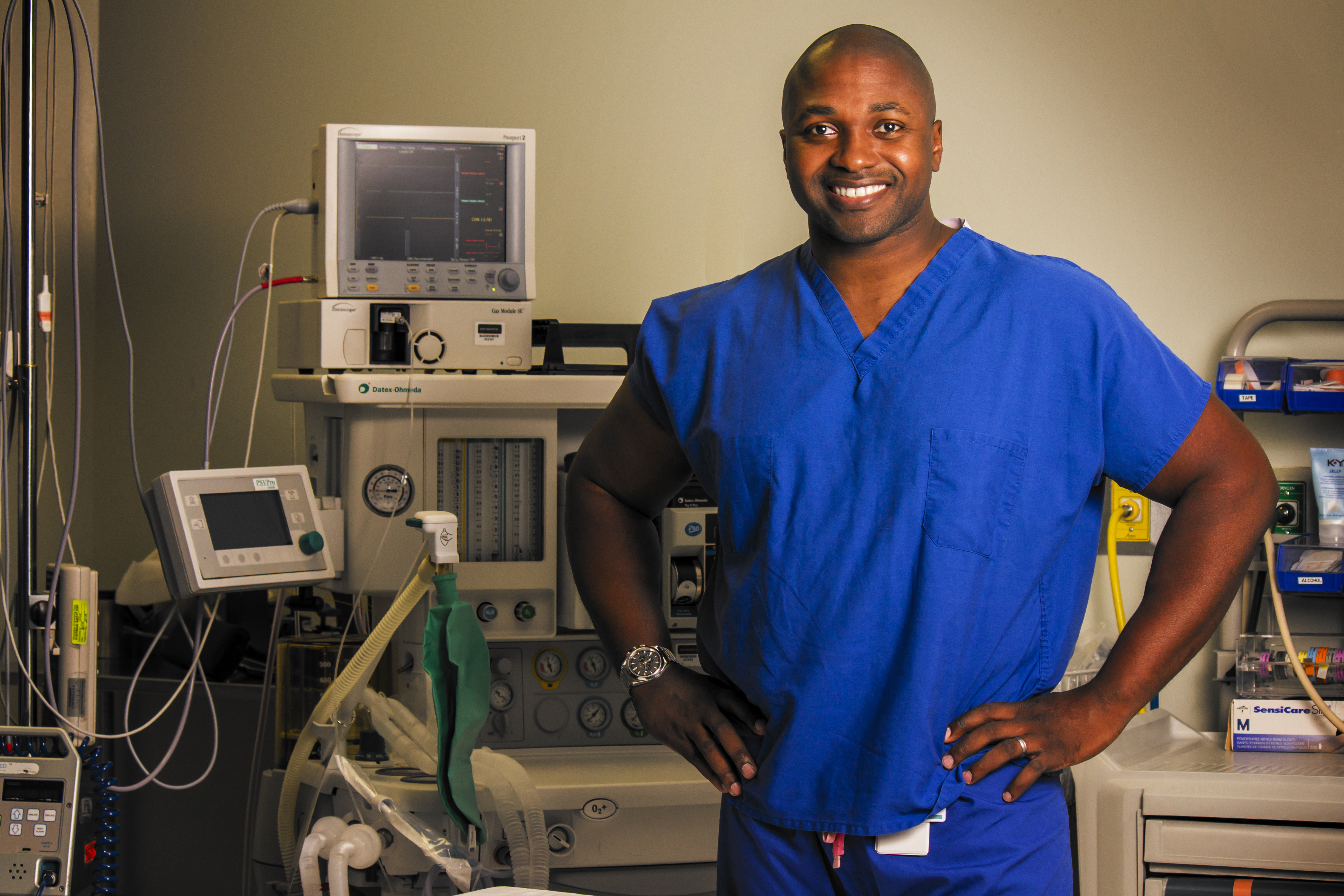 Dr. Rull James Toussaint had his pick of places to work as an orthopedic surgeon.

He has accomplished much, including treating victims of the 2013 Boston Marathon bombings as well as the 2010 earthquake in Haiti.

He graduated from the New York University School of Medicine at the top of his class, completed the Harvard Combined Orthopaedic Residency Program and fulfilled a fellowship at the OrthoCarolina Foot & Ankle Institute in Charlotte, N.C.

As he weighed opportunities to work at places across the country, joining The Orthopaedic Institute in Gainesville — where he now serves as the in-house foot and ankle specialist — seemed like the natural choice.

“The institute is well positioned, with a large range of specialists,” Toussaint said. “There are 28 surgeons and non-operative physicians treating the entire spectrum of muscle, bone and joint disorders. They have been very supportive at every step I take in learning about the practice.

Moving to Gainesville was natural for Toussaint. He grew up in Fort Lauderdale after his family moved there from Haiti when he was 4.

“My heart is in Florida,” he said. “My parents have moved to Palm Bay, so I’m close to them now.”

Chicago didn’t compete in Division 1 athletics, so Toussaint found it easy to embrace the Gators.

“I’m looking forward to experiencing the SEC,” he said.

“It’s important to work together as a team,” Toussaint said. “Foot and ankle problems aren’t isolated from the rest of the musculoskeletal system. You can’t treat one part and forget the other.”

Foot and ankle problems can have many causes, including degeneration with age, congenital or acquired deformities, and injuries from sports or trauma.

Treatments vary considerably. They include: total ankle replacements; reconstructing damaged ligaments or tendons; and grafting bones to strengthen the foot or ankle.

“In general, I try nonsurgical approaches before I do surgery,” Toussaint said. “They include shoe modifications, braces and physical therapy.”

A Sense of Mission

As an undergraduate, Toussaint was intent on becoming a physician, so he completed a pre-med curriculum while also completing a major in economics. His goal was to work in financial services long enough to pay off his student loans.

“I was very successful in financial services,” he said. “After three or four years, I realized it was time to pursue my medical education; otherwise, I might never do it.”

When the earthquake struck Haiti in 2010, Toussaint was in the second year of his residency at Harvard.

“I wanted to help because I spoke the language, and I had enough experience to make a contribution,” he said. “This work reaffirmed that I was doing the right thing by specializing in orthopedics.”

When the Boston Marathon bombing occurred in 2013, Toussaint was the chief resident of the orthopedic trauma service at Massachusetts General Hospital.

The news site BostInno quoted him as follows:

“‘I remember vividly the smell of gunpowder,’ he said. ‘Like the fourth of July. That smell was all over the emergency room. It was very frightening and alarming.’”

Toussaint was responsible for triaging every patient who came in, and he operated on patients whose injuries were life threatening or could cause them to lose a limb.

Toussaint returns to Haiti two to three times a year, often with the Boston-based program Partners in Health.

After he is established in Gainesville, he hopes to recruit local community members to accompany him on trips to Haiti.

He’s optimistic about gathering local support because of the community’s cooperative spirit, he explained. That spirit is evident at North Florida Regional Medical Center, where Toussaint does his more difficult surgeries.

“It has a sense of community while (also) having the latest in resources,” he said.

Toussaint believes his diverse background will help him be effective in his new position.

“I’m able to relate to people of different backgrounds, and I want to help as many people as possible improve their health,” he said.