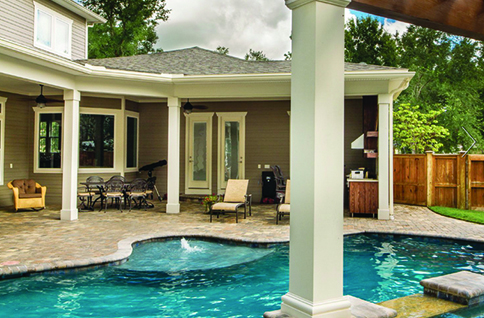 Brian Bedell knew he was destined for building pools when he caught himself fixedly doodling pool designs during his 9-to-5 cubicle job.

“After a couple of days of sketching a spa here, a waterfall there, it dawned on me—someone is trying to tell you something,” recounted Bedell. “You’re not where you’re supposed to be.”

In that moment over six years ago, Bedell decided to do whatever it took to get his license, start his own company — H2Oasis — and build pools his own way. And he’s never looked back.

“I just fell in love with it, like a round peg in a round hole,” said Bedell, a Gainesville native.

In alignment with his creative approach to pool-building, Bedell refers to backyards as canvases throughout the planning process. A blank canvas is truly how Bedell sees each new build or renovation opportunity — he doesn’t believe in selling “cookie-cutter” pools.

“We can make a pool look like whatever you want it to be,” said Bedell. “I look at a pool as a custom extension of your life. I like to consider each home, yard and family’s wishes to build something unique to them that fits their needs and exceeds their dreams.”

From a calming, lush pool with a spa and several waterfalls to a therapeutic pool with easy wheelchair access to a high-powered linear Olympic-quality training pool, Bedell has designed and built ultra-custom pools for a large variety of needs and wants.

While the current and upcoming season may not conjure images of lazy pool days, fall and winter are the ideal time for pool construction and repair.

“Have a messy backyard and construction debris now, during the traditional off-season, while you don’t have to worry about it,” explained Bedell. “Then the first day of spring, you’re ready for that outdoor cookout, the hot tub party, the backyard fire pit. You’re ready to go.”

An added bonus to construction during the cooler months? No one has to suffer the Florida heat.

“You’re saving my crew from having to work with the hottest temperatures of the year,” said Bedell.

Bedell cares a lot about his crew, and his customers.

“I want to treat my customers like they’re family,” he said. “When I’m making a decision, I consider how I would approach my mother, my wife, my daughter. What would I want for them? Once I answer that question, it’s pretty obvious how I want to treat people.”

From the first stroke of the planning brush to the last stonework detail, Bedell wants H2Oasis customers to truly feel as if their pool is their own personal oasis. It’s not unheard of for clients to make adjustments to the canvas as the project progresses, and Bedell happily accommodates those requests.

“Once the project progresses, sometimes their understanding of the details and viewpoint can change, and that’s OK,” he said. “I want the pool to be everything they want it to be. When I leave, I want them to have many, many years of happy, safe enjoyment of their pool.”

Bedell hopes to eventually expand to be a one-stop resource for pool construction in North Central Florida, with showrooms, retail space and at least two different example pools on site.

“Of course, the on-site pools would have to be updated every so often to keep up with new trends,” Bedell considered, a huge smile on his face and sketchpad in hand. “That won’t be a problem.”